Lost in all the attention devoted to Toronto's latest mega park announcement is the news that the Bayview bike lane is already open. This is a big deal for a number of reasons, not the least of which being that it's expected the bike corridor will help people to access the future park.

There are a number of finishing touches still required before construction will officially wrap on the project, but cyclists have already started using the guardrail-separated path that runs along the east side of the street between Rosedale Valley and Pottery roads.

It's unlike any other bike infrastructure in the city in that the path is completely protected from traffic. It is officially referred to as the Bayview multi-use trail for this reason, but it functions more as a bike lane than an off-street path. 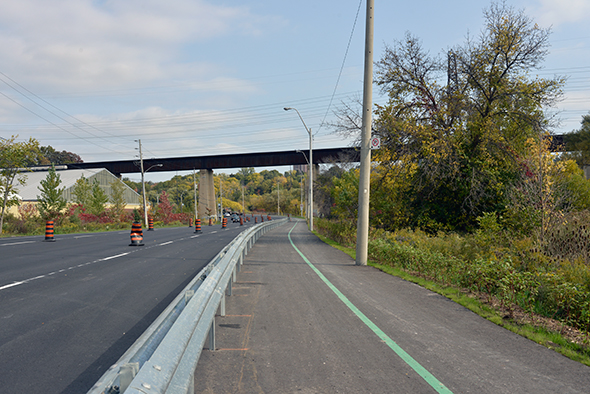 It's also worth noting that it's installation didn't result in a reduction of lanes for vehicular traffic. Because there were shoulders on the side of this fast-moving road before, the lane was able to be built using the ample extra space that was available.

In conjunction with the bike infrastructure, the street has been completely repaved, which makes an enormous difference to both cyclists and motorists. The street conditions here had deteriorated to such a degree that it was no longer deemed a safe way to access the Brick Works.

Now, it will be one of the best options to get to this cultural hub, but also to the new super park that'll take shape over the coming years. It's an everybody-wins infrastructure project that Toronto should look to as an example for future projects.