Driving in downtown Toronto has become a particularly cruel experience this week thanks to the shutdown of Richmond between Yonge and Bay streets. TTC track repair and other roadwork will keep this section of street closed for five days, ending on October 11.

There's a full closure of the Richmond and Bay intersection, while westbound traffic is diverted north and south at Yonge St. Given the central location of the shutdown, there's a huge ripple effect that pushes traffic way back on Richmond (east of Jarvis during rush hour) and clogs the streets surrounding the closed area. 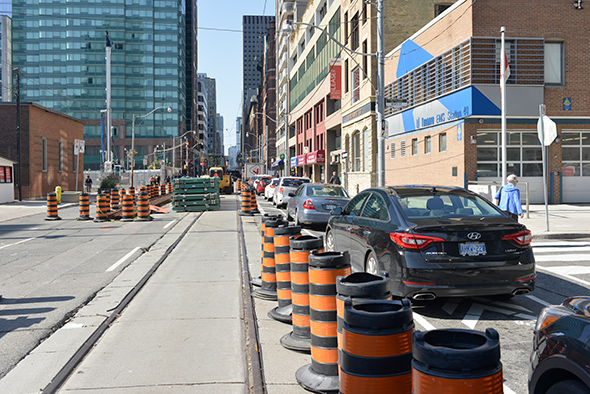 The city recommends diverting at Church, Yonge or University Avenue depending on the direction that you're heading, but having experienced the gridlock this morning, I'd suggest carving out an even wider path if you can.

Just to make matters even worse, there will also be a closure of Bay between Adelaide and King for crane placement starting at 7 p.m. on Friday and lasting until 11:59 p.m. on Monday. That will further complicate the morning rush and make driving down to the Jays game on Sunday a slow affair.

Leave extra time and prepare to be patient until the work wraps up.