Moss Park is about to look a lot different

Like much of the downtown core, the area surrounding Moss Park is booming as people flood into the neighbourhood's incoming condos and rental buildings. And earlier this week, residents got a peek at what their new community centre might look like.

The project, designed by MacLennan Jaunkalns Miller Architects, is still in its early days, as the Toronto Star reports. But it includes a multi-storey facility with two ice pads, a pool, a walking track and a rooftop park. The project also seeks to overhaul the park with splash pads and a playground as well as tennis and basketball courts.

As the Star writes, the first floor of the glass-clad building has been conceived using "trauma-informed" design, which will hopefully make it more welcoming and accessible for those who have experienced homelessness. 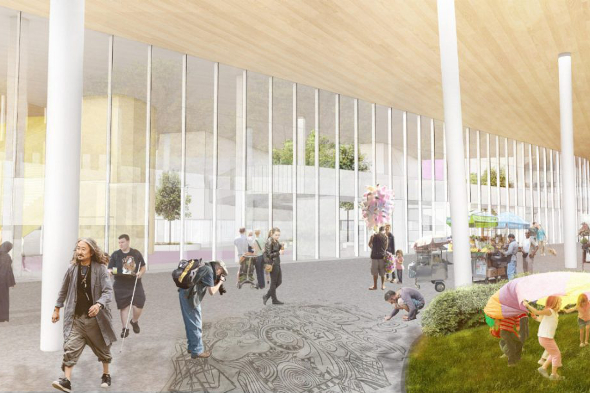 If all goes according to plan, this new, much-needed community centre will sit on the west side of the park beside the armoury. The existing John Innes Community Recreation Centre will remain open throughout the construction process.

While many are praising this plan, the Star reports that some nearby residents aren't happy with it due to a lack of public consultations and the possibility it might lead to increased traffic. There's still, however, a long way to go before it all actually comes to fruition.