One of West Queen West's most iconic landmarks in the late 2000s was Thrush Holmes' neon-adorned gallery and studio space. Located just west of Dovercourt Rd. beside what would become the sales office for the Bohemian Embassy, it was a symbol of a neighbourhood defined by a creative spirit that had emerged from its industrial past.

When Holmes relocated in 2011 after five years, the character of the street and surrounding neighbourhood had changed immensely. The arts hub that was 48 Abell was gone, the Mercer Union moved north to Bloor, and the area had become the city's hallmark of hip living, complete with a roster of new condos and bars.

This isn't a sad story. Or at least it doesn't have to be. Toronto needs place likes the West Queen West we have today, but it also needs areas that will serve as breeding grounds for artistic endeavours, new ideas, and cultural experimentation. For now, the city still has such places in steady supply.

Where did Thrush Holmes go when he left West Queen West? 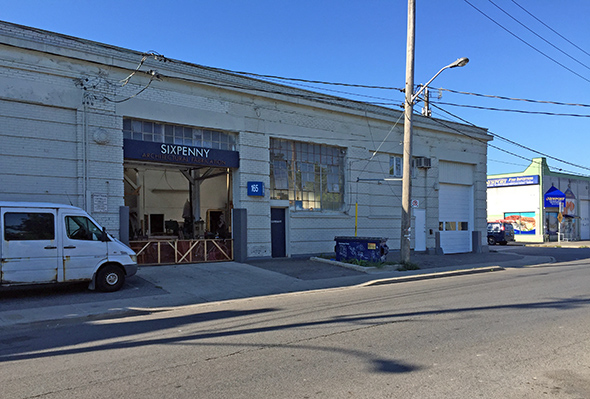 Geary Avenue, of course. That strange hybrid of a street where you're just as likely to find an auto body shop as you are a jam space, a brewery, an architecture firm, or an artist studio. In a city that's growing as rapidly as Toronto, it's places like Geary where you might take our cultural temperature.

Part of the reason for this is the zoning of the street. Geary Avenue is predominantly zoned as Employment Industrial lands, which permits a wide variety of uses but precludes two rather significant ones: residential developments and entertainment facilities, a.k.a. nightclubs and live music venues. 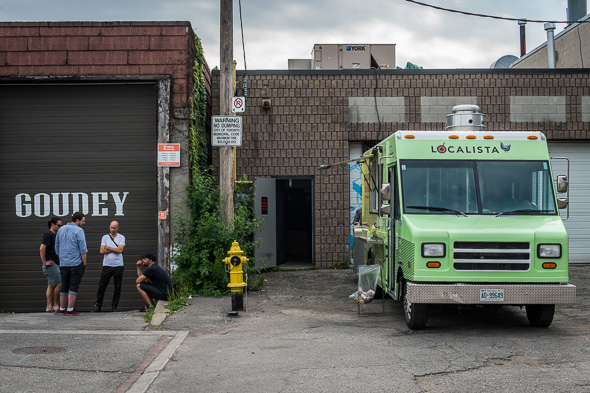 There was considerable disappointment in the music community when DIY venues that had popped up on the street were served with zoning violation notices late last winter, but in the aftermath, it appears that Geary's diverse and highly creative character is protected by its zoning status rather than the other other way around.

Venues like Geary Lane and 76A continue to be successful because they're multifaceted and not merely live music spaces or businesses that might be confused as nightclubs. These places are studios before they're venues. 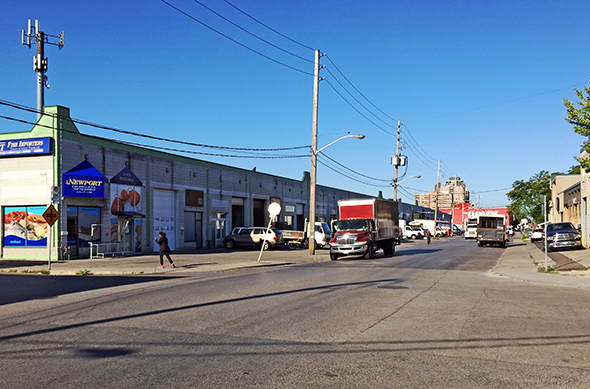 Amidst all the attention the street received last year, there were several misguided attempts to characterize it and the surrounding area as "the next Ossington," a reductive label that fails to grasp the manner in which Geary has developed. The entrepreneurial character here has given rise to a commercial upswing, but it's hardly a shopping or entertainment destination. 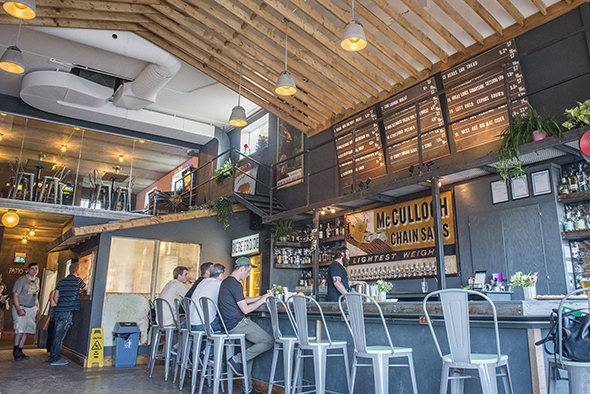 While recently opened bar The Greater Good has proved a popular successor to the rarely populated KITCH, it's the only bit of official and consistent nightlife that Geary currently sustains. On the contrary, most of the action here takes place during the day, from tastings at Blood Brothers Brewing and Yongehurst Distillery to caffeine fixes at Dark Horse Espresso. 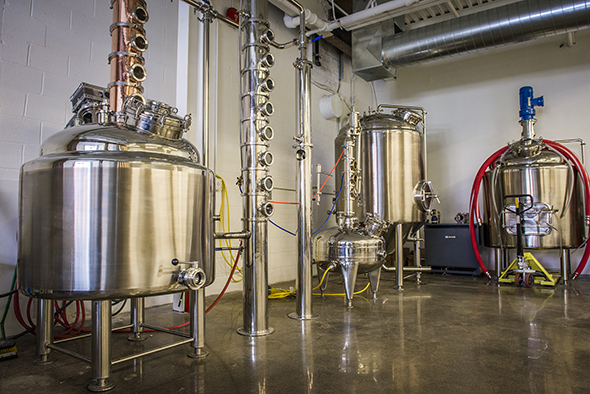 All three of these businesses are good examples of what makes Geary so fascinating. This Dark Horse isn't just a cafe; it's a bakery that supplies all the other locations with their sandwiches and treats. Blood Brothers and Yongehurst, meanwhile, are primarily focused on making beer/booze, and the tasting component naturally follows.

In other words, businesses on Geary aren't looking to capitalize on some distant possibility that the street will boast a party scene, but on the productive vibe that it cultivates right now. Take, for example, the street's newest tenant, an architecture and design firm that's making waves for its innovative approach to both disciplines. 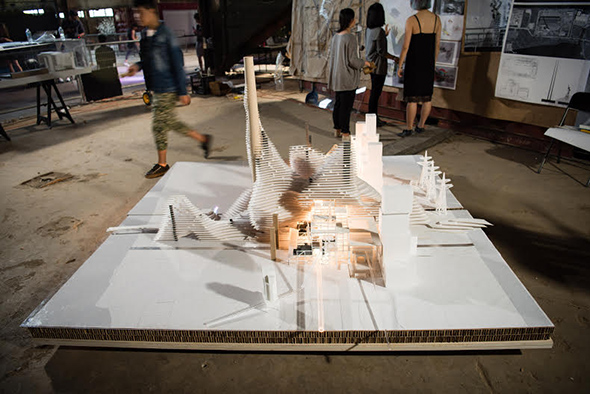 "PARTISANS needed to go big," co-founder Alex Josephson tells me about the firm's recent relocation to Geary Ave. "We scoured the city for interesting locations and looked at this 5,500-square-foot space in The Artisan Factory... Geary is one of the last industrial manufacturing pockets in downtown Toronto. We love to find new synergies, so being close to other makers and fabricators was a priority."

Space isn't an ancillary consideration here. The industrial character of the street is why such studios exist. "The studio is big enough to build and showcase all of the models and prototypes we make," Josephson continues. "It doesn't hurt that some cool breweries and bars have opened up, too. Also, if you replace the "a" in Geary with an 'h,' you've got a great architectural omen!'" 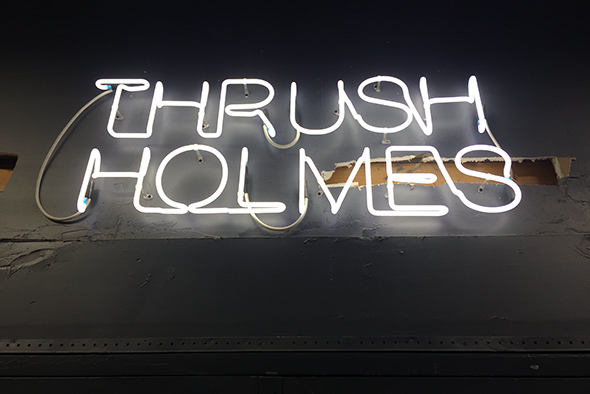 The Artisan Factory itself is a microcosm of the street. The former textile printing factory's brick exterior is as bland as they come, like much of the architecture on Geary. And yet inside you'll find a futuristic condominium concept model at PARTISANS just a door away from the enticing neon that marks Holmes' studio, which is itself just a few paces away from a workshop from which gorgeous guitars derive.

Claudio, the current owner of the building acquired the space in 2004 when the area was, as he says, "very sketchy." The renewal started with wood working studios and other soft industrial uses before more creative and hospitality-oriented businesses moved in. It's been a slow process, but "now's the fun time," he says in regard to the current mix of tenants in the building. 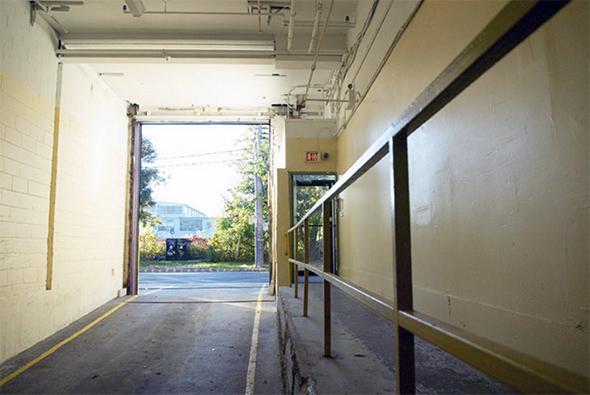 "I think people like how adaptable we are to their needs, but the building is also attractive because it has three loading docks," he says in underscoring the importance that utility plays in drawing people to the building and Geary in general. "It's also a place where collaboration between tenants is commonplace, even if it's just cutting a piece of wood."

Geary remains such a profoundly interesting part of Toronto because it somehow manages to ride the line between an insular work zone and a burgeoning commercial strip where neither of these distinct uses overrides the other.

That's a rare thing in this city.