10 weird statues and sculptures in Toronto

Weird statues in Toronto are everywhere. Just the other day I sat outside to eat lunch beside a large, life-size cow grazing in the grass. This past weekend I staged an outer planetary photoshoot next to a giant floating collection of yellow circle structures in the woods. Many of them are thanks to the Percent for Public Art Program. Others are just because.

Toronto has monumental statues, nothing earth shattering, but we have some goodies. On the other hand, we have some fantastically weird ones. Here are my faves.

The Pasture, TD Centre 77 King Street West
Seven cows laying down in the grass, completely relaxed, watching people in suits stressfully walk to meetings, lunches and pacing smoke breaks. Canadian artist Joe Fafard's bronze cow creations are a beautiful reminder to slow the eff down, take a second, laze in the grass with them, lean on them, interact with these life-sized beasts. 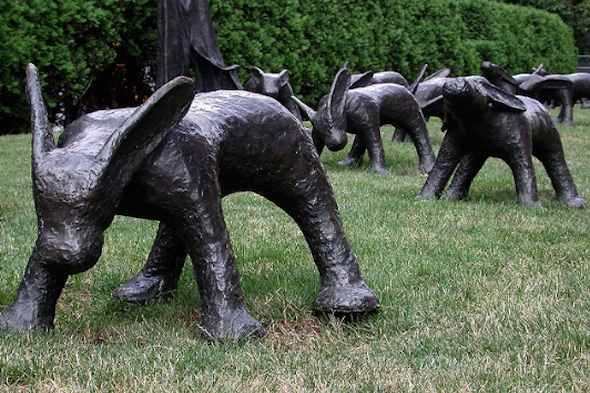 Remembered Sustenance, (near) Metro Hall, 55 John Street.
Cute rabbit-cow dogs hang out like confused miniature reindeer on a small stretch of lawn outside Metro Hall. Created by artist Cynthia Short, these 19 bronze hybrid creatures have been around since 1992. To make things a bit more strange, there's also s curtain drawn by two birds and at the bottom, and a bronze dish with an outline of a ballerina. 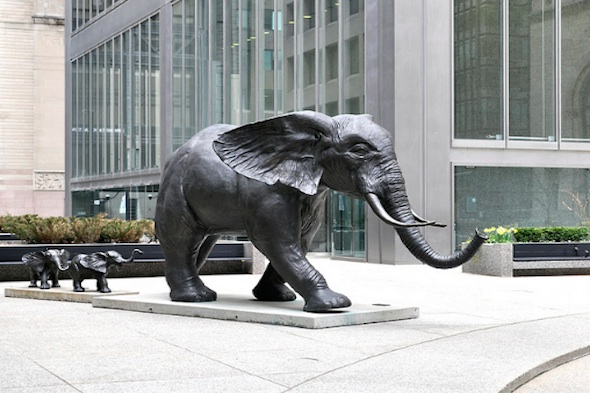 Tembo, Mother of Elephants, Commerce Court Courtyard, 199 Bay Street
This is one of the largest bronze elephant statue in the world and worth finding. Tucked away below King Street inside Commerce Courtyard amongst suits, and skirts-andrunning-shoe-combos is Tembo (Swahili for elephant) and her two babies. Don't try sitting on these bronze babes by Derrick Stephan Hudson during business hours, or security will politely ask you to step off.

Guardians, 85 East Liberty Street
I drove by these five handcrafted figures which measure from three to six metres in height the other day and thought to myself, these look like giant, metallic pieces of poop. (Maybe better placed outside Toronto's new Poop Cafe) The large turd structures welcome you into Liberty Village and each have three pieces. A mirror ball placed in the middle of each. 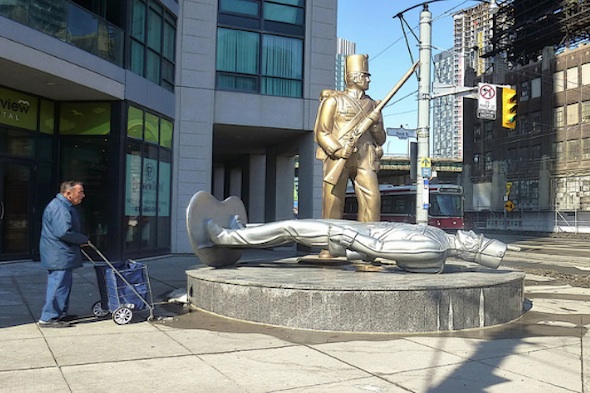 Monument to the war of 1812, 600 Fleet Street (Bathurst and Lakeshore)
This is serious statue from Canadian culture hero Douglas Coupland. The standing solider is Canadian and the defeated soldier on the ground is American, representing the British North America's success in resisting the U.S. invasion during the War of 1812. They just make me think of that fun '80s song Toy Soldiers. 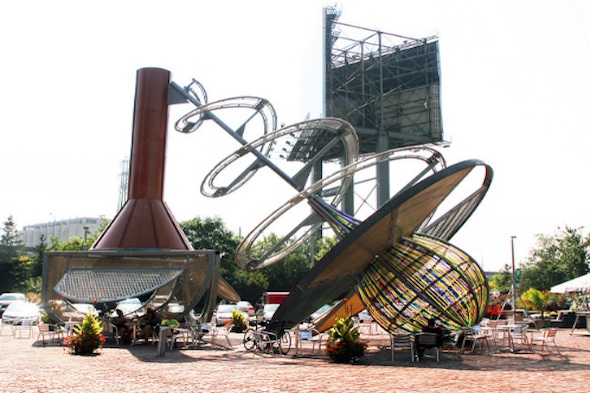 Still Dancing, (in the middle of) Distillery District
The first word that comes to mind when running into American sculpture Dennis Oppenheim's humongous piece in the Distillery District is confusion. Then I read the 38-foot chimney roller coaster thing and 18-foot "frozen tear drop" structure represent the distillery process! It's intrinsically woven into what the neighbourhood is. Super cool, also super ugly. 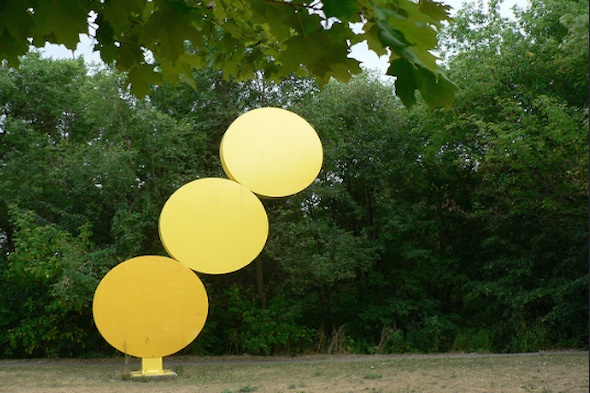 Three Discs, (Sculpture Hill) High Park
Three massive yellow circles mounted together, jotting up into the sky. There's an X-Files, how the hell did this get here vibe to the sculpture by Israeli artist Menashe Kadishman, which sits among a bunch of other oddities commissioned for the area back in 1967. This will totally get you over 20 likes on Instagram. 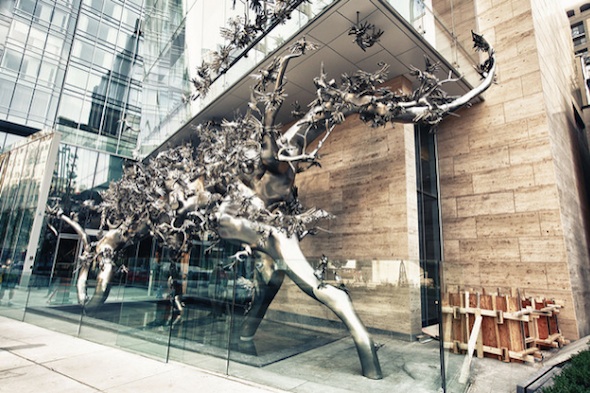 Rising, Shangri La Hotel, 180 University Ave
What kind of looks like a giant whippet being attacked by an evil flock of birds in the shape of human hands, is actually a bunch of doves twisting around a tree branch in the shape of a dragon. I just blew my own mind writing that sentence. Chinese artist Zhang Huan's statue also sits in water. It's one of the city's boldest and most wonderfully confusing structures. 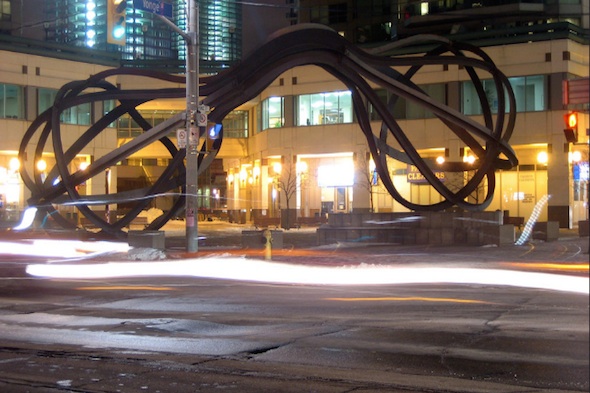 Between the Eyes, 10 Yonge Street
I've always found this sculpture to be one the city's strangest. I'm not extremely well versed on female anatomy, but this one always reminds me of fallopian tubes. Apparently it's a skeletal formation of two semi-deflated balloons. You can very easily climb, hang and sit all over this one with a new of the water. 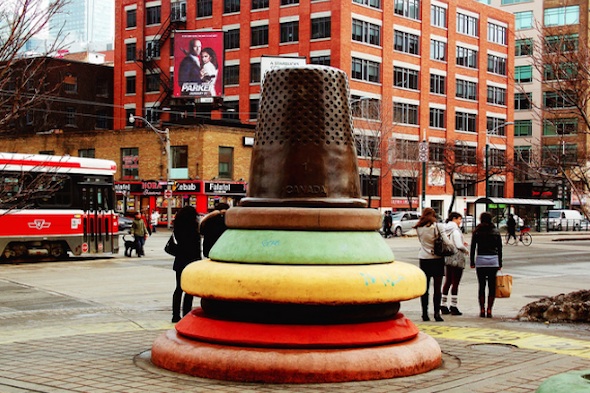 Uniform Measure/Stack, Corner of Richmond and Spadina
An homage to the city's fashion industry and district, this stack of buttons and a thimble is a gentle reminder that we've still got it, despite recent bad news surrounding fashion week. This piece by Stephen Cruise is a controversial one because parts are official and parts are public add ons. Have a seat around it sometime and live your runway fantasy.

Did I miss one of your favourite weird statues in the city? Tell me and the readers in the comments so we can check it out!