The past and the future of the Brunswick House

Known affectionately by many Torontonians as the "Brunny", the Brunswick House had been a staple of student booziness as far back as the early 1950s.

Named after the corner on which it stands, the building originally served as a stagecoach shop built by George T. Davies in 1876. At the time of its construction, the area around Bloor and Brunswick was thinly populated and known simply as the Bush. As the city grew and diversified, so did the patrons of the Brunswick House. 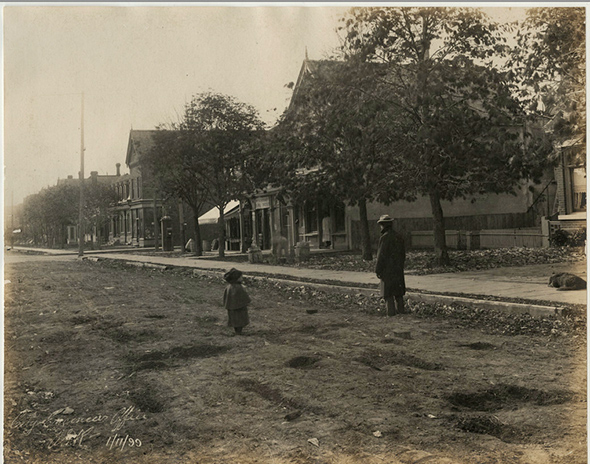 Used mainly as a hotel for 75 years, the building's tavern welcomed not only thirsty travelers, but the soon-to-be local immigrant population. However, the encroachment of the U of T campus in the 1950s would set the stage for a new era in the life of the Brunswick, as a watering hole for the student population.

The purchase of the building in 1961 by Morris and Albert Nightingale brought a vivacious period of jazz and blues to the Brunswick's youthful crowd. The attendance became so large that additions to the building were soon required including "Pickle Alley" and Albert's Hall, the latter of which became a buzzing music venue. 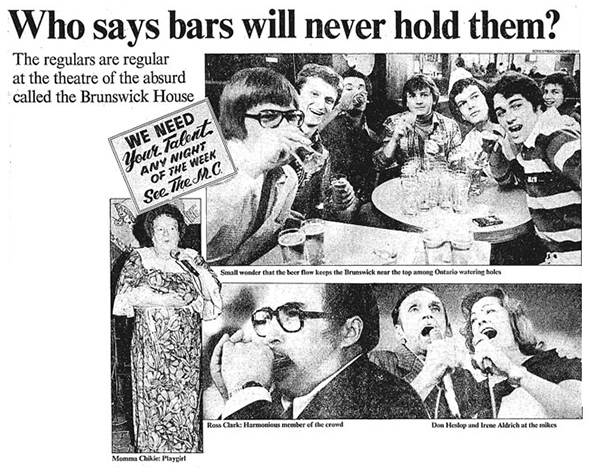 For many, the 1970s and '80s were the bar's heyday. The cast of characters who frequented the place have become local legends: singing waitress Diamond Lil Shephered (who had 13 children), improvised dancer "The Queen of Sweden," Rockin' Irene and Nate the Great, who continued to take the stage well into the 90s with show tunes from another era.

There was also, of course, Donnie Sinclair, the diminutive fellow who ran a shoe shine stand at the front of the Brunswick House. He also doubled as a bouncer and a diehard entertainer with a tendency to belt out "Oklahoma" or perform Elvis impersonations.

These people were the fabric of the bar and encapsulated the vibrant character of the Annex at the time. The affection that many built up for the Brunswick House can be traced back to this era, when the pub attracted and celebrated personalities from all walks of life.

The '80s was an era of renowned live music at the Brunswick house including: Etta James, Buddy Guy and KD Lang. In the early years of the decade, Jeff Healey led the house band. At the Brunny, cheap cover and fantastic music led -- perhaps unsurprisingly -- to the highest recorded beer sales in the province.

Even as the live music moved away, the pub's cult following and its licentious reputation preceded itself as evidenced in the 155 police calls received between 1998-1999. 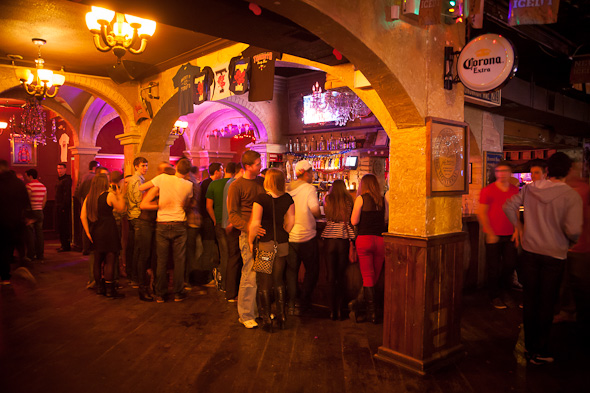 As one of the oldest bars in the city, the Brunny conjures up many nostalgic memories - even if they are foggy - for generations of Torontonians as the place to go for a cheap pint, rowdy crowd, and a wild night.

When the Brunswick wrapped up operations last month, there was an outpouring of memories; not only for the local establishment, but for the neighbourhood it helped to define.

The trend of corporatization has been seeping into the Annex since the '90s and is now rapidly accelerating. Along with other iconic Toronto establishments such as Honest Ed's, Book City and Dooney's, the Brunswick House will suffer the same fate of corporate re-use. 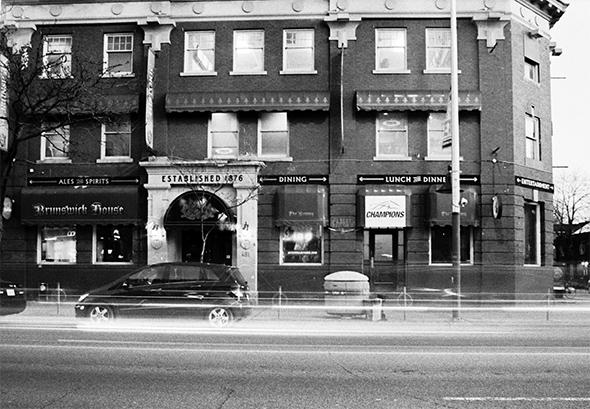 The next chapter of the Brunswick's history will be as the home of Rexall's flagship Toronto store. Occupying the first floor of the building, Rexall will work diligently with construction design experts to "build a store that embraces the heritage of the building and the local neighbourhood," explains company representative Derek Tupling.

The company is still short on details regarding its exact plans for the building. Tupling says that "this is not a project we want to rush. We want to make sure this flagship location gets the attention it deserves. Further to that point, we have retained the services of an expert in construction design to help guide us through this important project and process."

The building that once house the Brunswick House may soon get the royal treatment from its new tenant, but it's sure to be a radically different place than the one misty eyed Brunny patrons remember - one that will surely be beautiful but far more sanitized.