This could soon be the tallest building in Toronto

The crown of tallest building in Toronto could be given to a condo at the foot of Yonge St. should developer Pinnacle International get its way. Right now the title goes to First Canadian Place, but there are a host of other projects in the works that, if approved, would eclipse its 298 metres.

Up until a recently, the tallest building in development was Mizrahi's The One, which was projected to come in at a soaring 340 metres before it was scaled back during the Design Review Panel process. With it now pegged at just over 304 metres, the mega-project at 1-7 Yonge St. would now take the crown with the tallest of its buildings planned at 320 metres. 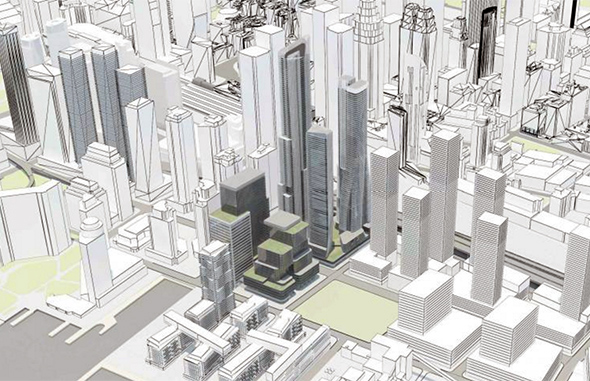 It's worth noting, however, the heights of these developments tend to fluctuate quite a bit during the design process. The One bounced around between 320 and 340 metres before setting at its current height, and the Pinnacle's Yonge St. plans have ranged between 293 and 303 metres before creeping up in this latest proposal.

Will it be approved by the city? This most recent zoning reapplication already responds to objections the city has with the plans for what is one of the biggest redevelopment schemes in the country. Along with the 95 metre tower, the project includes condos that reach 85 and 65 storeys, respectively (the remaining two towers clock in at under 40 storeys).

A preliminary hearing is scheduled with the OMB later this year, which will go some way towards determining if the height of these structures remains as proposed.