Toronto to take a friendlier stance on street murals

It looked like Toronto was living up to its "no fun" moniker when city staff released a report recommending against the pursuit of a street art program that would bring colourful murals to local roadways.

Today, however, Toronto's Public Works and Infrastructure Committee voted unanimously to green light a pilot program that'll bring these murals to up to four different wards this summer.

"I think it was the best outcome we could have hoped for," says David Meslin, a community organizer who helped spearhead Toronto's first street mural project in the Regal Heights neighbourhood back in June.

That piece of art, though technically illegal, is located in the centre of Springmount Avenue. And, it came about thanks to a grassroots process, inspired by other cities around North America, such as Portland, Oregon, who have used these murals take over their local streets, beautify their neighbourhoods and build community. 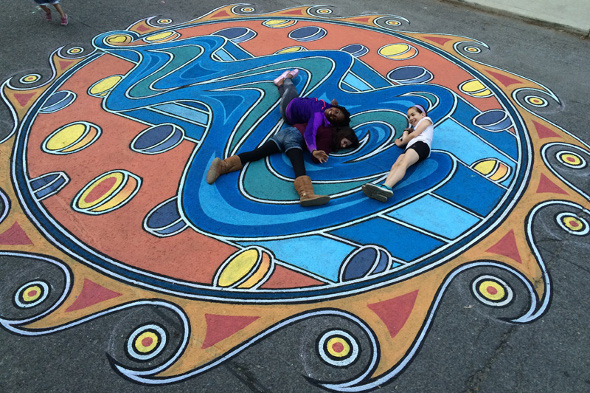 And as Meslin writes in Spacing magazine, "the final product also serves as a traffic-calming measure as cars tend to slow down as they approach the painting."

For the past few months, Meslin has been working with Ward 17 Councillor Cesar Palacio to bring an official Street Mural program to Toronto.

"We're really just playing catch up with other cities. They're already doing this across Canada, from Halifax to Vancouver," Meslin says.

He spoke at today's meeting, along with Riverdale resident Gerry Brown, former art teacher Barbara Mathews, and Melissa Frew, the artist behind the Regal Heights mural.

Afterwards, councillors raised concerns about issues of cost, safety and accessibility, but for the most part, they enthusiastically supported the initiative.

"We have a chance here to create a permanent process for the city if we can make sure that these four murals, as a pilot, go really smoothly and beautifully," says Meslin. And, as he notes, Toronto will hopefully see its first legal street murals later this year.

While the Public Works and Infrastructure Committee approved the pilot program today, this item will now be considered by City Council on February 3.