Navigating the Toronto subway at the height of rush hour is a major headache, but the TTC has a few weapons in its arsenal designed to manage the crowds. Among them: plastic barriers, megaphones, and reversible escalators.

TTC spokesman Brad Ross says many of the escalators from the Bloor-Danforth platforms at Bloor-Yonge station run up to the Yonge platforms during the morning rush and down in the evening.

"Depending on the time and day and the station, escalator direction is changed," he explains. "Bloor-Yonge and St. George are our two busiest stations where you would see that."

The TTC even has a crowd control room at Bloor-Yonge station where staff coordinate their efforts to corral the daily crush of riders.

Part of the reason why additional crowd control is needed at Bloor-Yonge is the T shaped alignment of the platforms, Ross says, with the Bloor-Danforth line intersecting with the Yonge line at the north end of the station. 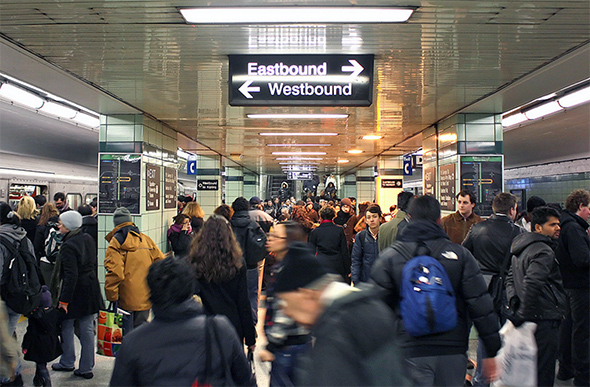 Riders coming up from the Bloor-Danforth line tend to bunch near the north end of the Yonge platform, so workers armed with plastic barriers and loud voices must work to redress the balance.

In future, with ridership projected to keep growing, the TTC might have to resort to more drastic measures in order to keep people moving.

"There's a study we're looking at with respect to Bloor-Yonge station and some engineering type options," Ross says. "A second platform for example ... that requires funding. There are some engineering options available, but nothing in the capital budget at this time."