Massive public space planned for under the Gardiner

The space under the western portion of Gardiner Expressway may look a lot different within the next two years. That's because a huge stretch of rather desolate land, between Strachan and Spadina, will be getting an extreme makeover.

By July 2017, Toronto will be home to a sprawling, 1.75 kilometre public space beneath the West Gardiner. It'll be comprised of, as the Globe & Mail notes, 55 outdoor "rooms," and will include walking and cycling trails as well as a grand staircase and areas suitable for markets and other social gatherings. Eventually it'll connect with the West Toronto Railpath.

Mayor John Tory formally announced this initiative on Tuesday morning. The $25 million dollar Project: Under Gardiner will be privately funded by Judy and Will Matthews. It's designed by Ken Greenberg and the Public WORK firm. The city will own the space and Waterfront Toronto will build it. 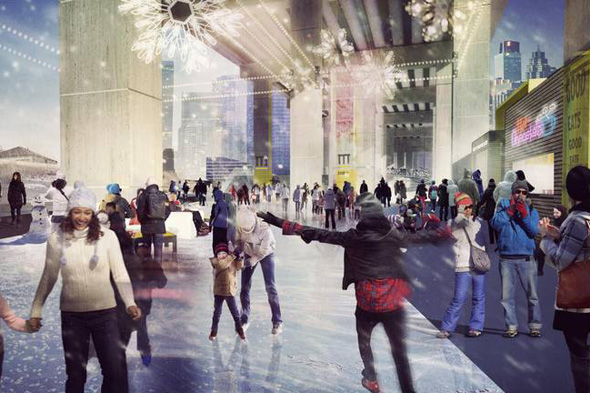 While many were disappointed with plans for the East Gardiner, this visionary new project appears much more forward-thinking.

What do you think of the plans for the public space under the Gardiner? Let us know in the comments.