A snapshot of Toronto's robust river system in 1817

Most people who've lived in Toronto long enough have at least a vague sense of the city's lost waterways. Names like Taddle and Garrison Creek are common enough that those who care to look can still track the passage of these ghost rivers via the built environment that's developed around them.

What's less known outside of urban geography circles is just how robust the river/creek system was in the area we now call Toronto back in the early 1800s when the Town of York was just witnessing the development that would usher in the incorporation of Toronto some 30 years later.

The map above dates back to 1817 and shows an early plan for York. Among the many fascinating things to note about it -- the lack of Lot/Queen St. is a major one -- the most obvious is the presence of waterways cutting all across the city.

You have the Garrison Creek ravine system (far left), but bear in mind that this map doesn't even include the bulk of the Don River, the estuary of which is located at the far right, or the Humber, which is off the map to the left. In other words, what we see here are minor waterways, but ones that clearly defined the geography at the time. 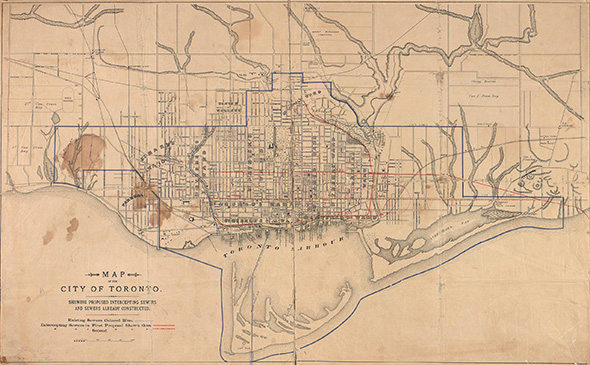 Fast forward to 1888 (click photo for bigger version), and the presence of these waterways hasn't quite been eradicated, but the burgeoning sewer system has mostly buried the creeks that once existed in what we might call the downtown core (note how many there are, however, on the east side of the city).

One would never characterize Toronto as a city of rivers, but if you peel back a few layers of concrete, the statement holds at least some validity.