If you were to stand at the intersection of King and John 55 years ago, chances are you would spot a Canadian Pacific locomotive before you would find gourmet meal. In the early 1960s, the strip was a unglamourous collection of railway sidings and factories that, at its heart, boasted an Esso station with "the world's finest car wash."

The turning point for the neighbourhood came in 1962, when "Honest" Ed Mirvish bought the run down Royal Alexandra Theatre for $215,000 in cash. "My wife, Anne, and son, David, had always loved theatre," he wrote in 1993. "I had always loved a bargain. The Alex looked like something we could go together with."

In total, the family spent more than twice the purchase price of the theatre on renovations, and re-opened in 1963 with a production of Never Too Late, a comedy about a middle aged woman's accidental pregnancy that was later turned into a movie.

During the 60s and 70s, the Mirvish family came to dominate the north side of the street, west of Simcoe, buying up run down factories and warehouses, painting them white, and turning them into cheap and cheerful restaurants to feed the Alex's customers.

The Princess of Wales Theatre arrived in 1993 and, in 2010, the TIFF Lightbox completed King Street's transformation from industrial wasteland to Toronto's ritzy theatre district.

Here's look back at King and John during its formative years. 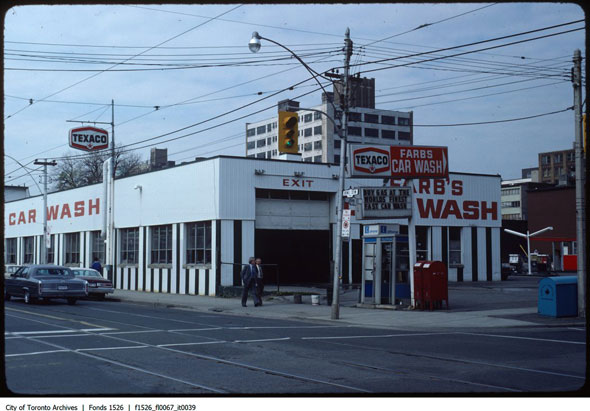 Farb's Car Wash, the future site of the TIFF Lightbox, in October, 1982. Farb's was last owned by Leslie Reitman, father and grandfather to filmmakers Ivan and Jason Reitman. The family and the Daniels Corporation donated the land to TIFF in 2003 and the new building opened in 2010.

"I washed my '63 Chevy at the Farb's Car Wash many times," Dan Aykroyd told Ivan Reitman, who directed Ghostbusters, at a ceremony celebrating the naming of Reitman Square.

The Seaway Restaurant (pictured at the top of the page) was at the southwest corner of King and John in 1973. 10 years later, the building was boarded up. The name clearly caused confusion. "What is the Seaway restaurant doing at King and John?," a confused reader asked the Globe and Mail in 1956. The building has since lost is cyan accents and now hosts a Second Cup coffee shop. 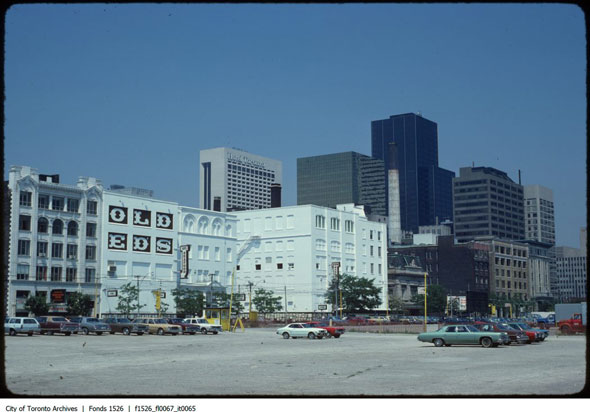 "When we bought the Alex [in 1962,] the area was still dingy," Ed Mirvish recalled in 1993. "I knew it would turn off audiences, unless we tried to clean it up ... fortunately we were able to buy two blocks of factories and warehouses to the immediate west. We painted them white, crammed them with antiques, and turned them into restaurants that are almost always packed."

As historian Jamie Bradburn recalls, Mirvish's restaurant empire peaked in the 1970s with Old Ed's (seen here, which initially employed waiters over 65,) Ed's Folly, Ed's Italian, Ed's Seafood, and Most Honourable Ed's Chinese. The last of the bunch closed in 2000. 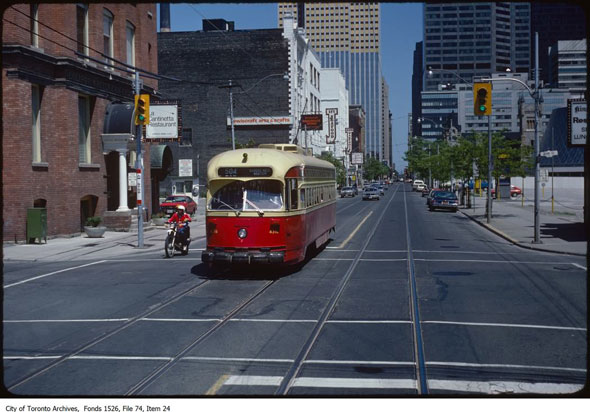 East on King at John in June, 1981. La Cantinetta restaurant in the Eclipse White Wear Building opened in 1973 and was apparently somewhat lacklustre early on. "The nine ... dinners read better than they taste. Service is efficient but lacking in sensitivity," critic Joanne Kates wrote in the Globe and Mail in 1975.

The name, which means "cellar," was borrowed from the name of a first floor restaurant in the Palazzo Antinoni in Firenze. The restaurant space is now home to a sports memorabilia store. 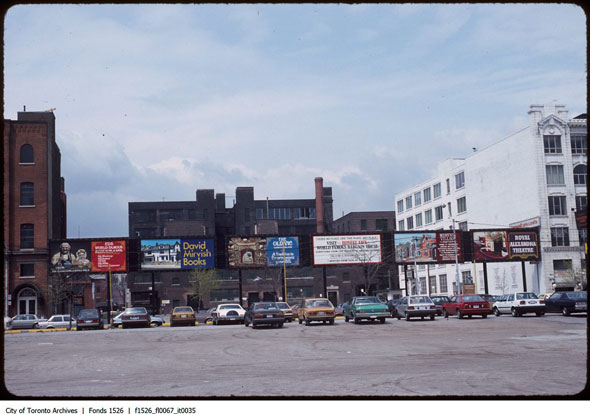 The future site of the Princess of Wales Theatre in May, 1984. The theatre opened with a production of Miss Saigon on May 14, 1993, exactly 30 years after "Honest" Ed Mirvish reopened the Royal Alex and precisely 10 after his restoration of the Old Vic in London.

Initially, Mirvish planned to host the show in the empty lot. "I thought we could put a temporary theatre on it to stage the show, then pull it down when it ended," he wrote in 1993. 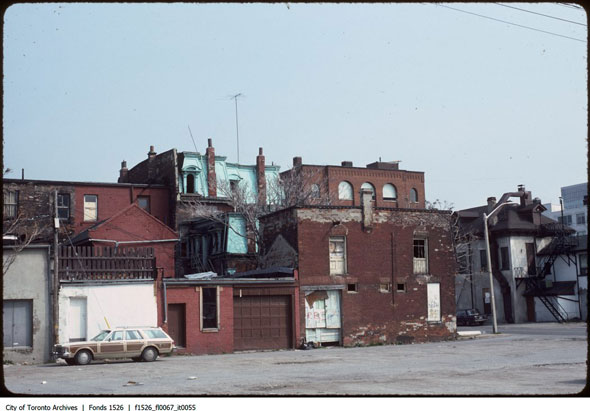 A bleak laneway scene southwest of King and John in 1984. The building on the right of the frame is at the southeast corner of the intersection. It was cleared a short time later for construction of Metro Hall. A condo building at 24 Mercer currently occupies the location where this photo was taken. In '84, it was a parking lot. 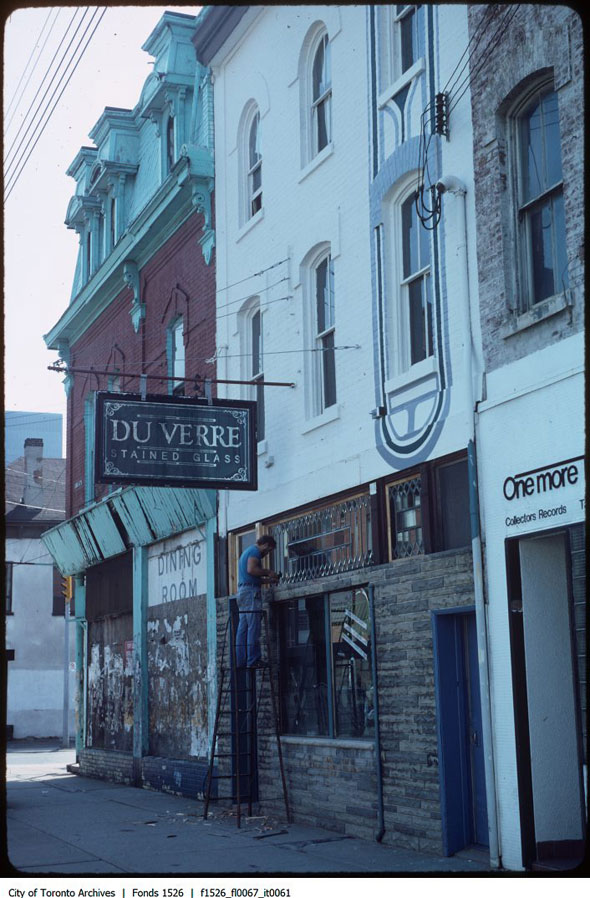 Du Verre Stained Glass stands next to the boarded up Seaway Restaurant in 1983. The former was opened in 1982 by Gina Lubin and it employed several freelance designers who produced original pieces of stained glass. Budding glass artists could also take lessons there. Du Verre had closed by the mid-1990s and the premises is now occupied by Pearl King. 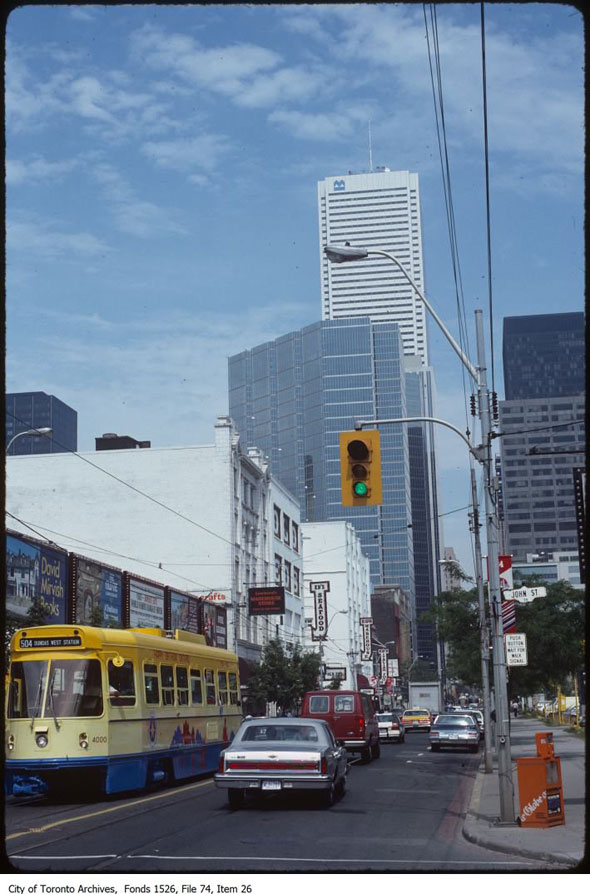 East on King towards downtown. The streetcar in this picture was given a blue and yellow livery in 1984 to celebrate Ontario's bicentennial (never mind that Upper Canada, the precursor to Ontario, wasn't formed until 1791 and the province itself wasn't established until 1867.)

Even the guts around the wheels were painted. The design on the side showed the Ontario parliament building and various figures. It said "Happy Birthday, Ontario" near the top. 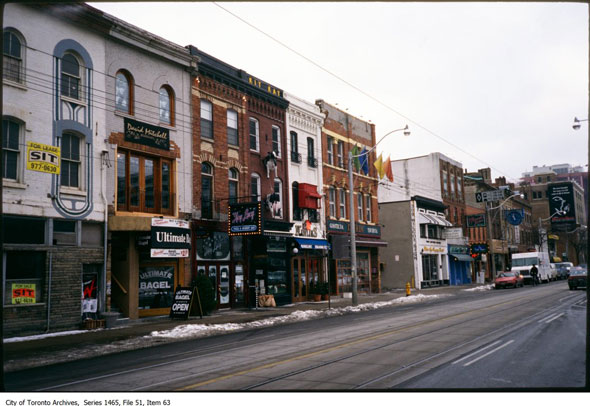 Restaurant row on the south side of King some time between 1995 and 1998. Kit Kat (the one with the cow sticking out of it) opened in 1993 and Hey Lucy followed shortly after in 1995. Kit Kat owner Al Carbone told the Toronto Star he was the "unofficial mayor of the neighbourhood" in 1993 as part of a feature about the newfound popularity of King West.