A snapshot of Danforth and Broadview in the 1910s

Before the Prince Edward Viaduct linked the city's east and west ends in 1918, Broadview and Danforth was far from the major intersection it is today. In 1903, the Danforth marked Toronto's northern city limit. Maps made at the time show just one building at the corner of a quiet rural outpost that was only accessible on unpaved, rutted roads, or by riding the streetcar to the end of the line.

A little less than two decades later, following the arrival of one of Toronto's most famous structures, the east was ready to rise.

Here's a look back at Broadview and Danforth during its formative years. 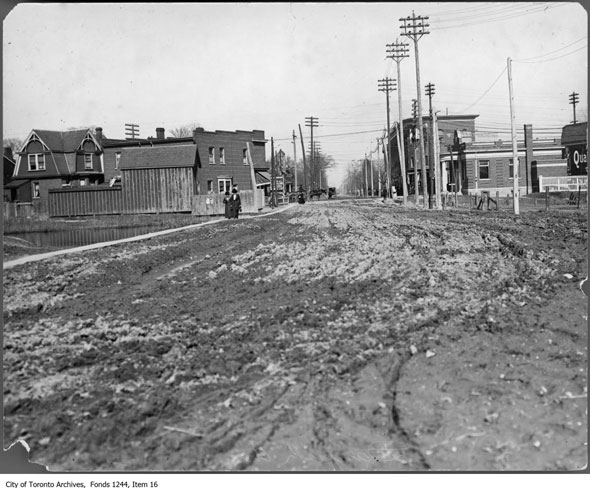 Looking east from the edge of the Don Valley before the beginning of viaduct construction. Playter's Hall with the rounded front at the southeast corner is still standing. The New York Cafe Restaurant and a Tim Hortons currently share the ground floor. 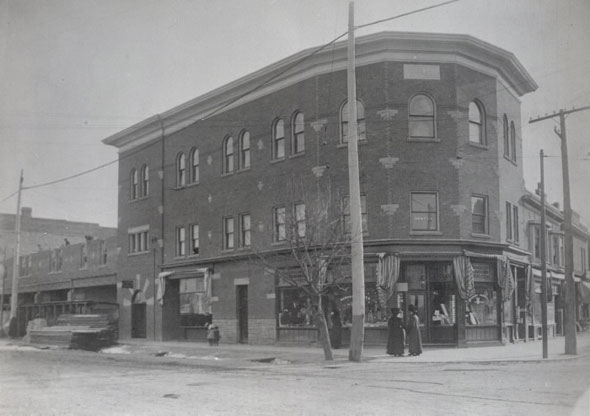 Playter's Hall was the first commercial building at Broadview and Danforth. When it opened in 1911, there was space for stores on the ground floor, a doctor and dentist's office on the second floor, and a meeting space on the upper level. The name of the building came from Albert Edward and William Ellerbeck Playter, members of a prominent local family who co-financed its construction. 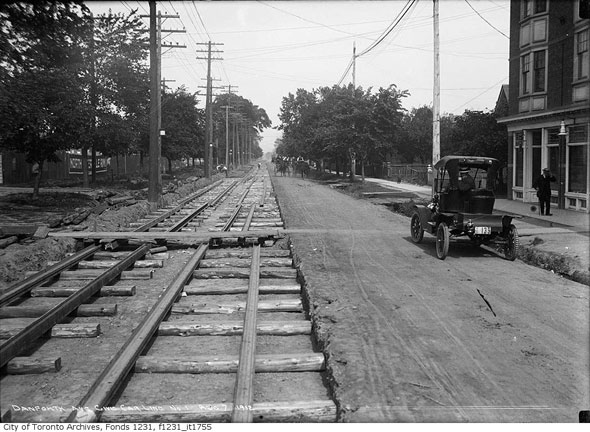 East along the Danforth from Broadview during streetcar track construction in 1912. The road had yet to be widened and it was still lined with trees and homes. 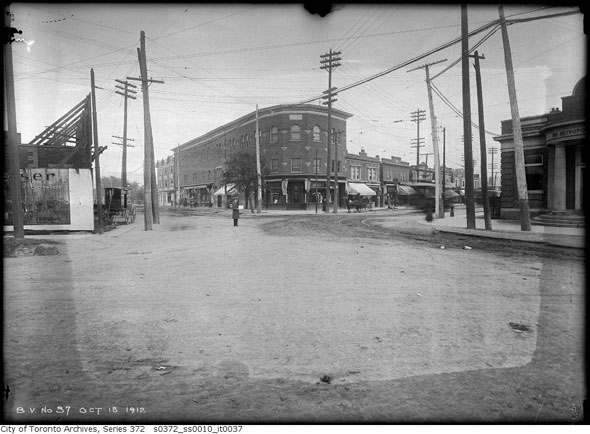 When this photo was taken in October 1912, the northbound streetcar tracks curved west and ended at Danforth Ave. The bank building on the right with the columned entrance has since been replaced by a squat structure housing a Pizza Pizza. 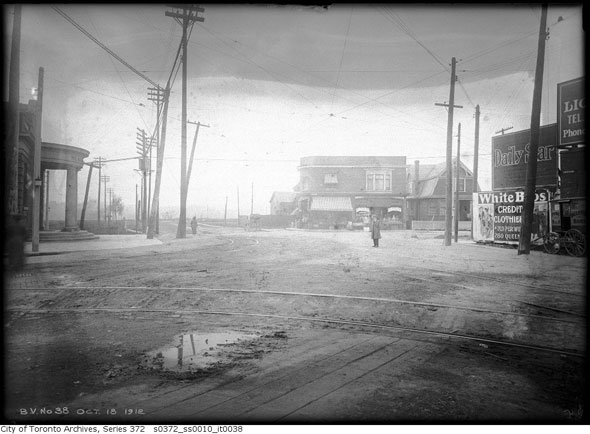 Northwest from the southeast corner in 1912. The wooden advertisement panels on the right of the frame shield the future home of a Canadian Bank of Commerce branch, which is there today. 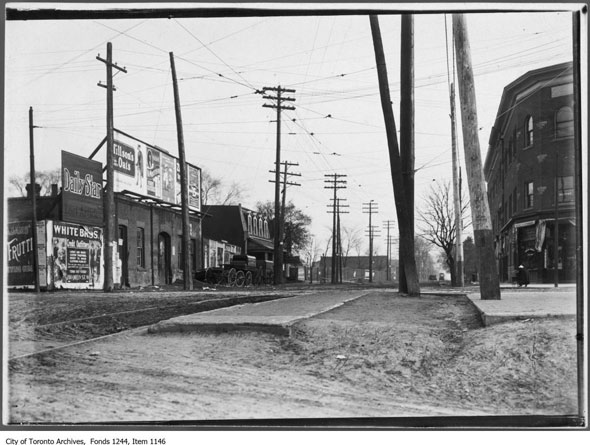 East on the Danforth from Broadview in 1914. In order to cross the Don Valley, vehicles would have used Winchester Dr., which roughly followed the path of the Don Valley Parkway access ramp southwest to the river. A bridge just north of the present day location of the Riverdale Park footbridge connected with Winchester St. in Cabbagetown, completing the crossing. 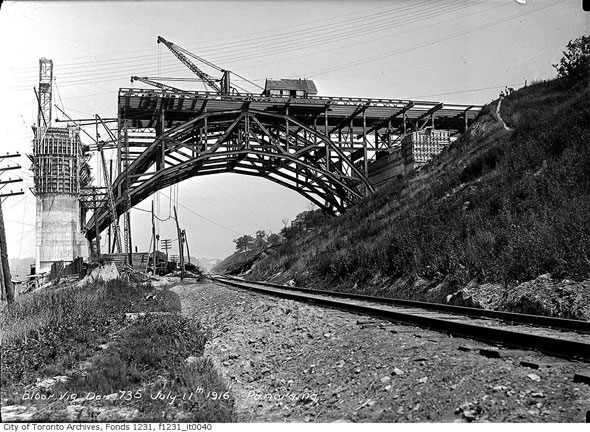 The superstructure of the Don section of the viaduct was built starting at the valley walls and working inwards toward the middle. This section, under construction in 1916, originally spanned the Canadian Pacific main line. Today, the Don Valley Parkway passes underneath. 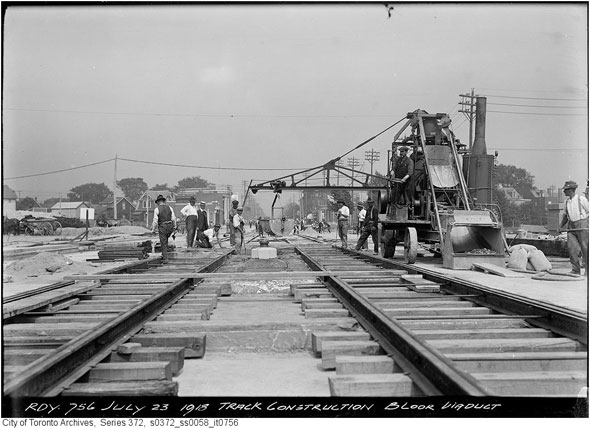 Even though the viaduct was built with a ready-to-use subway deck beneath the roadway, the city still had no way to fund a subterranean rapid transit line. Until the arrival of the Bloor-Danforth line in the 1960s, streetcars shared the centre lanes with autos. 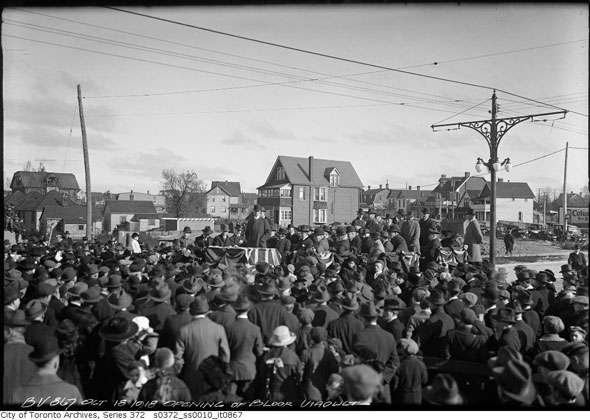 Viaduct opening day on October 18, 1918. The crowd has gathered on the east side of the bridge, just west of Broadview and Danforth. An apartment block now occupies the northwest corner in the background of the photo. 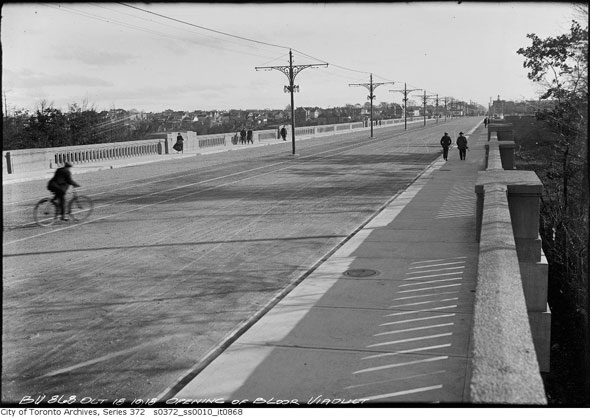 The viaduct has been altered several times over the last 97 years. The streetcar tracks are gone, so too are the pretty light standards. In 1965 the dormant subway deck saw its first train and in 2003 the Luminous Veil, minus its signature lights, was added to the concrete balustrades on both sides.