Toronto getting a new island in the Port Lands

A naturalized Don River and revitalized Port Lands are a step closer to reality today, as all three governments announced $5 million in funding for the due diligence required to proceed with a project that will ultimately cost in the neighbourhood of a billion dollars.

The idea is that by naturalizing the mouth of the Don River and providing flood plain protection to the vulnerable Port Lands, the city will finally able to proceed with development of these former industrial lands, which spans 400 hectares. Of that vast space, Waterfront Toronto claims that 290 hectares are a flood risk.

Truth be told, today's plans don't differ much from the last time the project was in the spotlight, save for some clever marketing that picks up on the fact that the re-routing of the Don will fashion a new island out of the northeast section of the Port Lands. In previous renderings, the island was nameless, but it's now being referred to as Villiers Island. 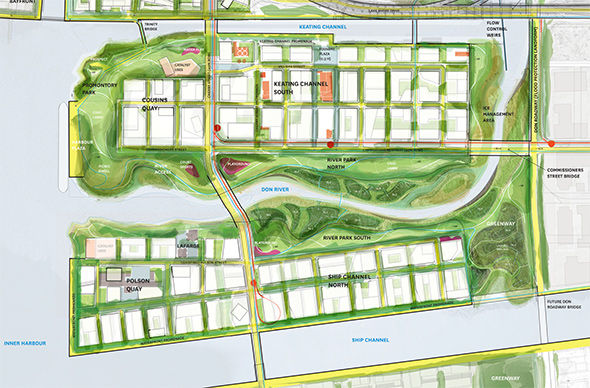 A new island is a decent way to generate some interest in a project that's actually quite pragmatic in nature. Flood plain protection isn't exactly sexy, but when you see what comes along with it -- namely ample green space and a dramatically beautified Port Lands -- it gets a whole lot more exciting.

Preliminary work is set to wrap up this year, which will be submitted along with an implementation strategy. It's a seven year project, so if it started in 2017, the earliest we would see a naturalized Don is 2024. That's a long time to wait, but at least the wheels are turning.