How Toronto almost landed the 2008 Olympics

When former champion gymnast Li Ning lit the Olympic torch at the Bird's Nest stadium in Beijing in 2008, it heralded the beginning of 16 days of high profile (and high cost) international sporting competition. Had things been just a little different, however, it might have been Toronto hosting the Games.

The bidding process for the 2008 Olympics started in 1998, the same year Vancouver began courting the winter event. In March of that year, Toronto city council overwhelmingly voted to form a committee that would be responsible for delivering the Games by a vote of 54-1.

The lone dissenting voice came from North York councillor Michael Walker, who said the Games would hurt the city financially and socially.

Others outside council had similar concerns. A group of activists called Bread Not Circuses were opposed to the cost of the event when the money could be spent on social programs. In 1989, the group were a thorn in the side of the unsuccessful Toronto pitch for the 1996 Olympics.

"If Toronto could develop a bid for a socially responsible Olympics, I think, God bless it, let's go ahead with the Games," Bread Not Circuses spokesman Michael Shapcott told city council in 1998.

Mayor Mel Lastman was more optimistic about the bid. "Toronto can definitely do it," he said. "We'll do the best job anywhere. We'll put on the best games anywhere in the world."

By April, the Toronto bid had won the enthusiastic approval of the Canadian Olympic Association. (It wasn't that hard: no other Canadian city submitted a bid for the 2008 Games, and the final vote was 58-2 in favour.) The province and federal government were likewise convinced of the idea's merits, and both agreed to cover some of the costs in 1999 and 2000. 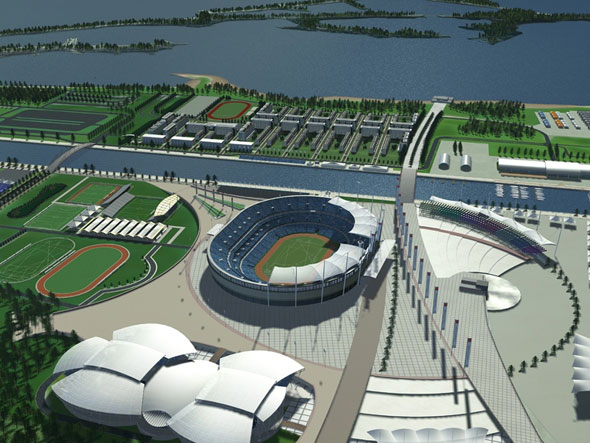 Toronto planned to build its Olympic stadium, aquatic centre, and athletes' village in the west Port Lands, just north of the Shipping Channel. The velodrome and tennis facilities would be at Exhibition Place and a new plaza covering Lake Shore Blvd. would provide a direct link to Ontario Place.

The Air Canada Centre would host basketball and volleyball and baseball would be played in the SkyDome. A central meeting place at the base of the CN Tower called the Olympic Ring Central Plaza was also included on the plans that were unveiled in November, 1999.

As with Toronto's other attempts at winning the Games, waterfront renewal was the carrot on the end of the stick for residents of the city. The provincial and federal governments pledged $12 billion in upgrades, which included new parks, naturalization of the Don River mouth, a complete overhaul of Union Station, and an airport rail link.

"There's no better time than now," said former mayor, MP, and head of the Toronto bid, David Crombie. "This is about city building for me."

Promoters also promised thousands of new jobs and $6 billion in other economic benefits. Abroad, Toronto was touted as a haven of multiculturalism--a stark contrast to arch rival Beijing.

In February 2001, as the final announcement drew near, an evaluation team from the International Olympic Committee visited Toronto for a round of final inspections. Desperate to make a good impression, the city cleaned up pollution-blackened snowbanks along the tour route and hurriedly swept the streets.

Still, the visit didn't exactly go smoothly. 11 of the 17 IOC inspectors became trapped in a lift for more than an hour at the Park Hyatt hotel moments before they were due to deliver their findings.

"I guarantee that this will have absolutely no consequences for Toronto's bid," promised the visibly weary chairman of the group when the press conference finally began.

And then there was Mel Lastman's cannibal remark. In 2001, less than a month before the final vote, Lastman explained to reporters why he wasn't keen to make a visit to Kenya to drum up support from African IOC delegates.

"What the hell do I want to go to a place like Mombasa," he said. "I just see myself in a pot of boiling water with all these natives dancing around me."

In Moscow with the rest of the Toronto 2008 team for the final announcement, Lastman formally apologized to Keba Mbaye, a Senegalese IOC vice president and the person in charge of tallying the final votes. Mbaye had earlier said he was offended by Lastman's crass remarks.

Beijing, of course, emerged winners that night. Toronto placed a distant second after two rounds of balloting, garnering only 22 votes to Beijing's 56. There would be no back-to-back winter and summer Olympics in Canada and the Toronto bid committee's $20 million budget proved to be money down the drain.

Still, Toronto did get one thing out of its failure: the sweeping waterfront renewal plans that were a cornerstone of the bid lived on, eventually becoming the responsibility of the Toronto Waterfront Revitalization Corp., which is now Waterfront Toronto.

People band together to rescue raccoon stuck in roof near Toronto