What the Queensway used to look like in Toronto

The Queensway started out as an east-west trail in southern Etobicoke, west of the Humber River, called Stock's Sideroad. Reflecting its position as a rough continuation of Toronto's Queen St., the road was renamed to match its eastern relative before 1900. The biggest change in the history of the Queensway came in the 1950s, around the the same time the Gardiner Expressway was carved out a short distance to the south.

Intending for the street to serve as a highway bypass for local traffic, engineers widened the road and pushed it through High Park to the intersection of King, Queen, and Roncesvalles, filling in the southern end of Grenadier Pond in the process. Streetcar tracks were added to the central reservation as far as the Humber Loop and the road beefed up to accommodate six lanes of traffic.

In the years that followed, the Queensway became home to a mix of residential properties, stores, and auto-related businesses, like taxi dispatch offices and gas stations. It was also where the first Toronto Tim Hortons opened in on June 1, 1970 between Royal York and Islington.

Here's a look back at what the Queensway used to look like. 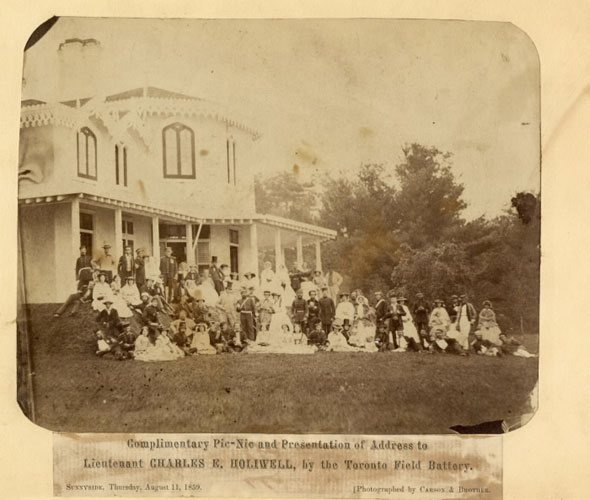 Sunnyside house between Sunnyside and Glendale in 1859. This photo shows a picnic that was given in honour of Charles E. Holiwell by the Toronto Volunteer Field Battery. 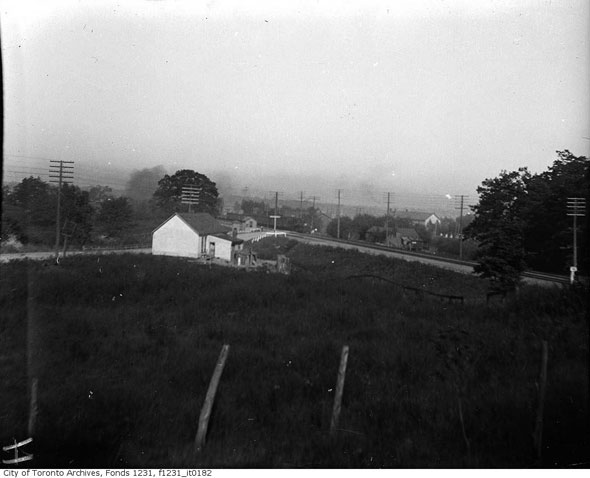 A rare early photo of the Queensway, showing the railway level crossing west of the Humber River, north of Lake Shore Rd. The view today, near where the streetcar tracks peel off beneath the Gardiner, is somewhat different. 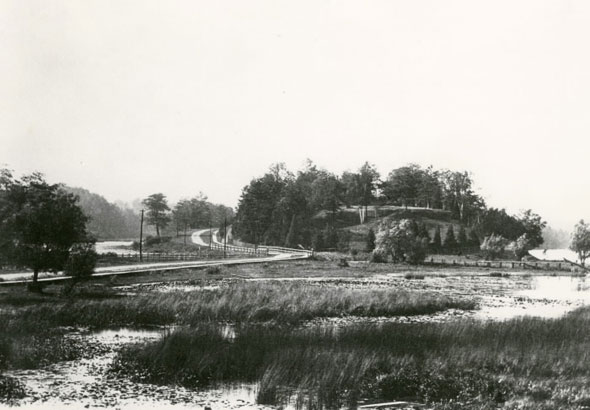 Looking north up Ellis Ave., west of Grenadier Pond, in 1900 before the area had been significantly altered from its natural state. 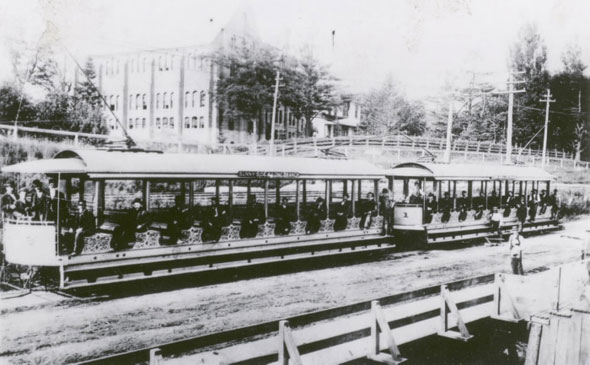 A Toronto and York Radial Railway streetcar outside Sacred Heart Orphanage (now St. Joseph's Health Centre) in 1900. The transit operator serviced suburban areas of the city until 1927, when it was absorbed by the newly-formed Toronto Transportation Commission. 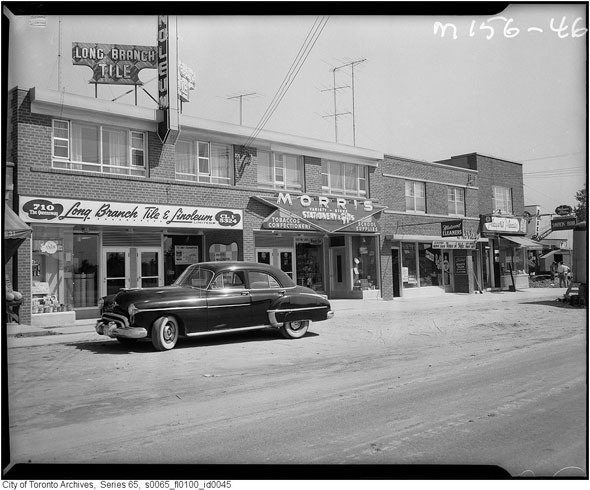 Pre-widening Queensway east of Royal York Rd. in Long Branch in 1957. These buildings are still standing, though the businesses have long since changed. Long Branch Tile and Linoleum and Morris variety store is now a used book store and an embroidery outlet. 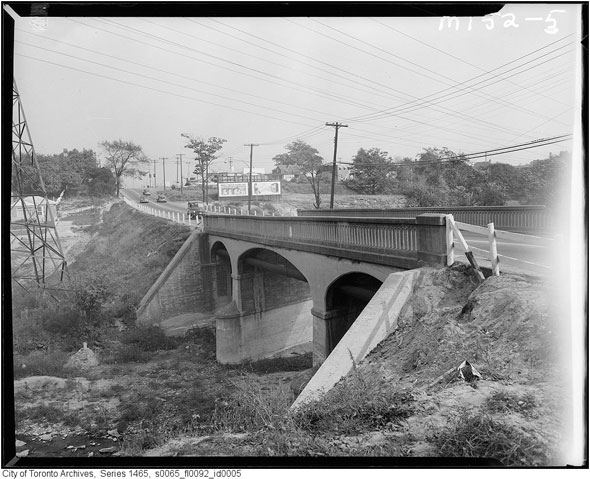 Pre-widening bridge over Mimico Creek in 1955. The current structure has room for four lanes of traffic. 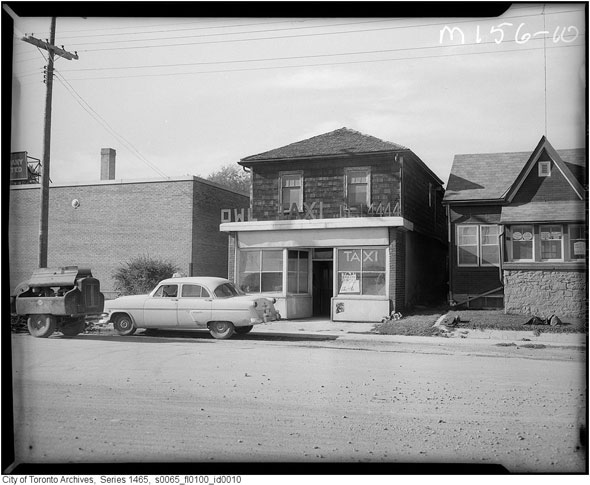 The dispatch office of Owl Taxi in 1957. 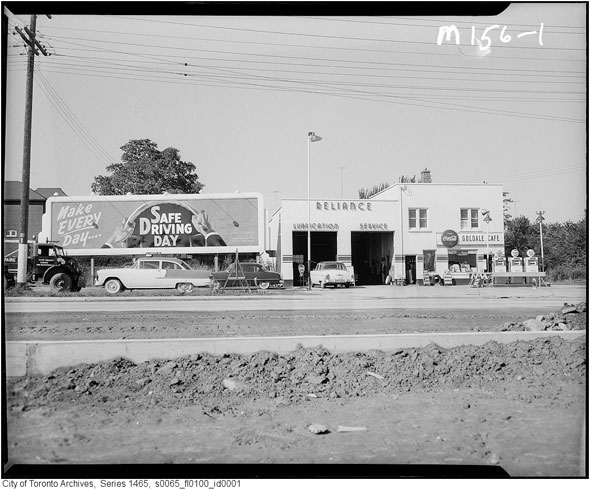 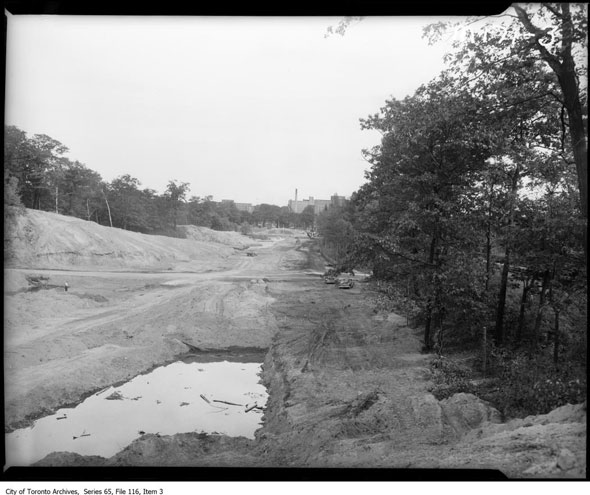 The landscaping for the Queensway near High Park. 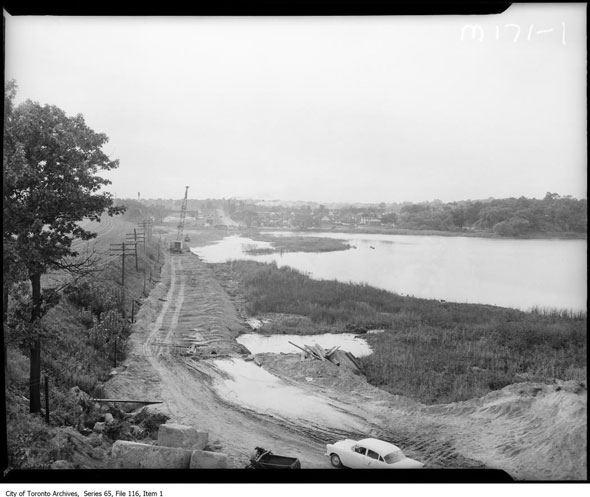 Handing over a portion of High Park and Grenadier Pond for the Queensway was a controversial move. In his will, John G. Howard, the landowner, explicitly stated that no portion of his former estate was to be used for anything other than parkland. 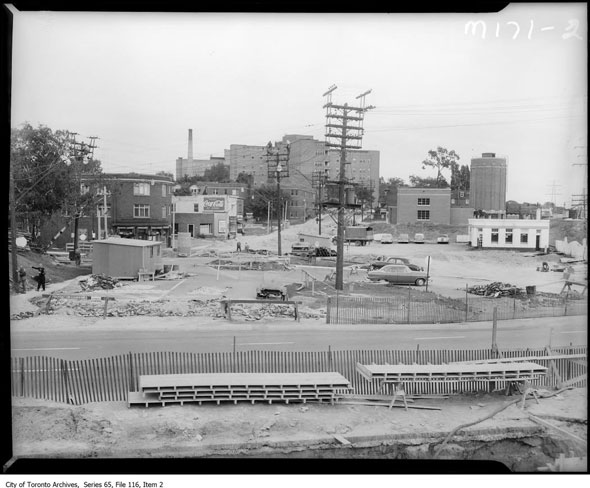 Demolition for construction of the Queensway west of King, Queen, and Roncesvalles. This picture was taken near Parkside Dr., looking east to present-day St. Joseph's Health Centre, in 1956. 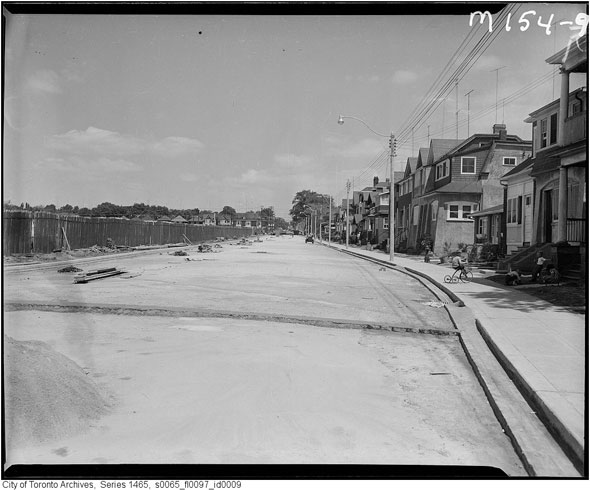 Parts of the Queensway have always been residential. Here, a child plays outside his home while work to expand the road continues close by. 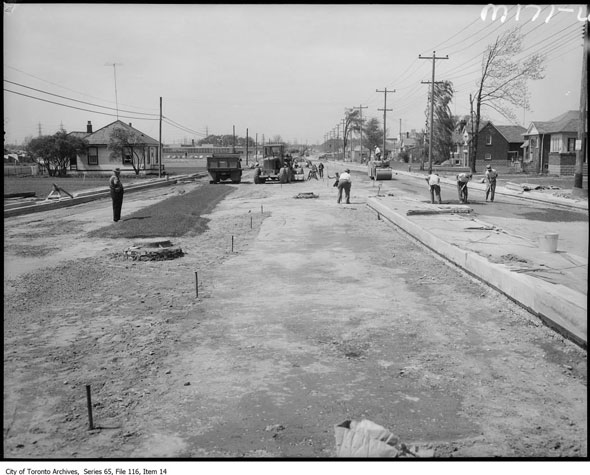 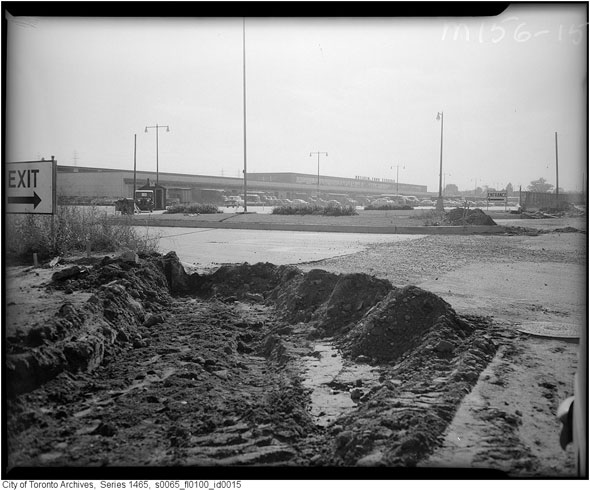 The Ontario Food Terminal, east of Park Lawn Rd., in 1957. 56 firms moved to the massive, $4 million wholesale facility from the St. Lawrence Market in 1954. Today, it's the third busiest produce distribution centre on the continent and the largest of its kind in Canada. 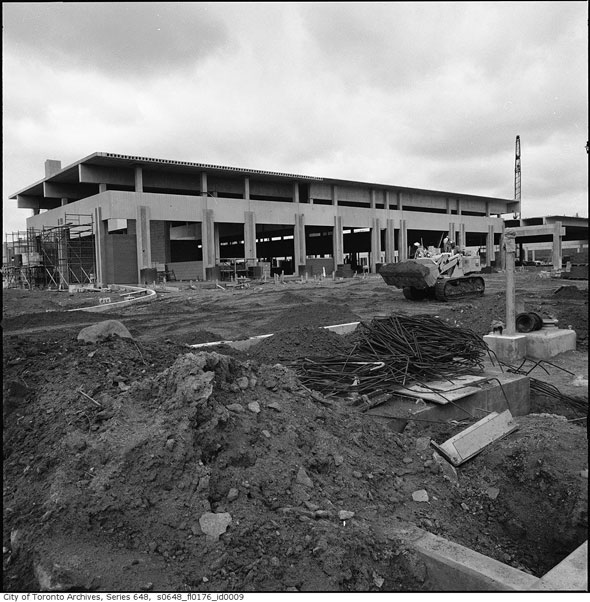 The Queensway bus garage near Evans Ave. under construction in 1965. The building is still in use today, servicing more than 20 routes in the west end of the city. According to Transit Toronto, the facility opened in 1966, replacing an ageing facility in Parkdale. 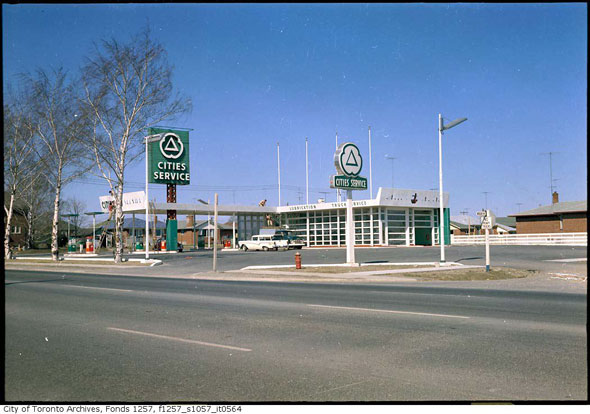 Cities Service Station at the northwest corner of the Queensway and Woolgar Ave. in the 1960s. Today, the property is home to a Mercedes dealership. 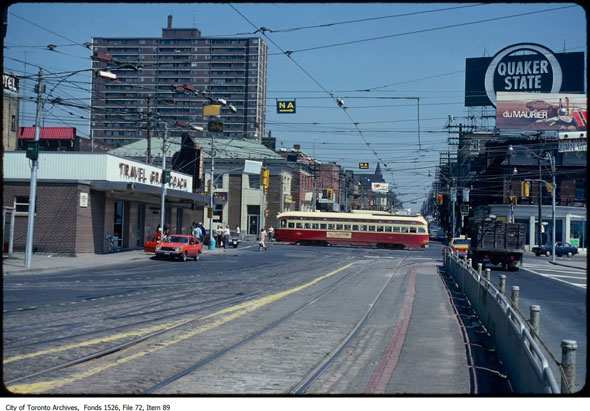 The eastern terminus of the Queensway at King, Queen, and Roncesvalles in 1973. The Grey Coach building on the left is now a McDonalds. 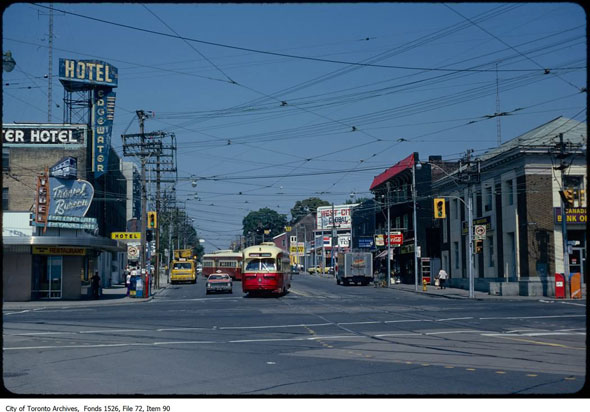 Up Roncesvalles from the east end of the Queensway in 1979. The Edgewater Hotel is a Howard Johnson. 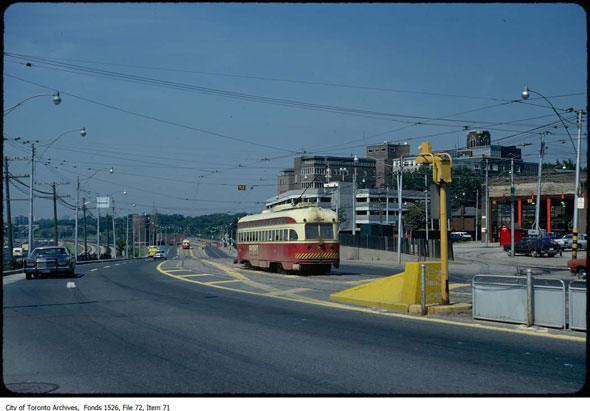 A PCC streetcar heads west past the Roncesvalles car house in 1979. The first CLRV streetcars entered revenue service on the Long Branch route the year this photo was taken.

Images: City of Toronto Archives (as marked). All others Toronto Public Library.