What the TTC's Spadina extension looks like right now

Every day more than 800 construction workers disappear underground to work on the six-stop, $2.63 billion extension of the Spadina line into York Region. Since 2009, the project has been hit by delays and complications. Opening day has been pushed back more than two years to late 2017 and a new management company has been brought in to ensure the finishing touches are completed as planned.

Right now, the physical structure of the line is largely complete: the tunnels are in place and most of the line has been fitted with track and power rails. The stations, however, are still mostly shells lacking wiring, tiling, lifts, escalators and other important fittings, and much of the next two years will be spent preparing the subway for use.

This is what the Spadina line extension looks like right now. 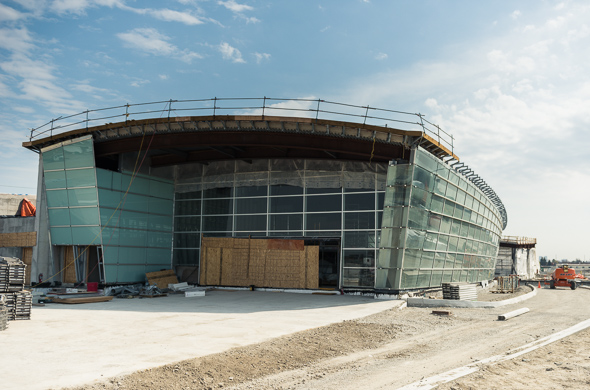 Downsview Park--not to be confused with the current Downsview station, which will soon be renamed Sheppard West--is located where the Barrie GO line crosses Sheppard Ave. When it's finished, GO trains will deposit passengers in the middle of the station. Track space has been reserved for a regional express rail line, too (should it be built.) 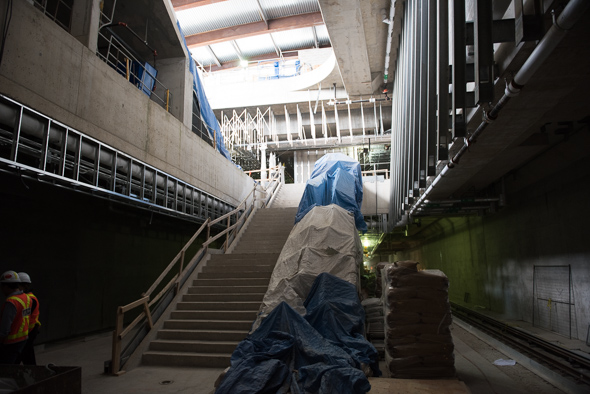 Many of the six stations on the Spadina line extension are designed to allow natural light to reach track level, which is often three storeys underground. At Downsview Park, special bird-safe glass panels will allow shafts of sunlight to travel down through the core of the building. The TTC says the station is 85 percent complete. 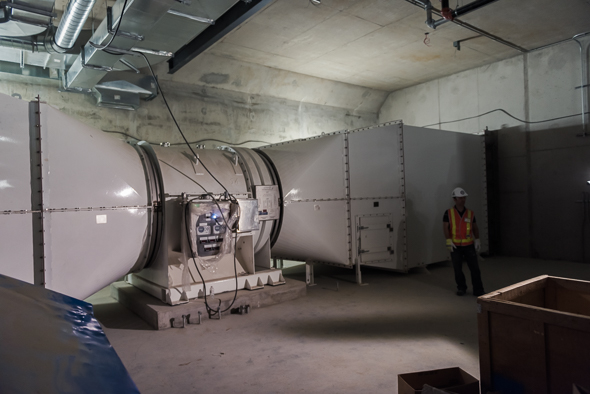 These massive ventilation fans are an important safety feature of the Spadina line extension. In the event of a fire, workers at the TTC transit control room more than 12 kilometres away will be able to suck air out of the station and tunnel with the press of a button, reducing the chances of a blaze spreading. 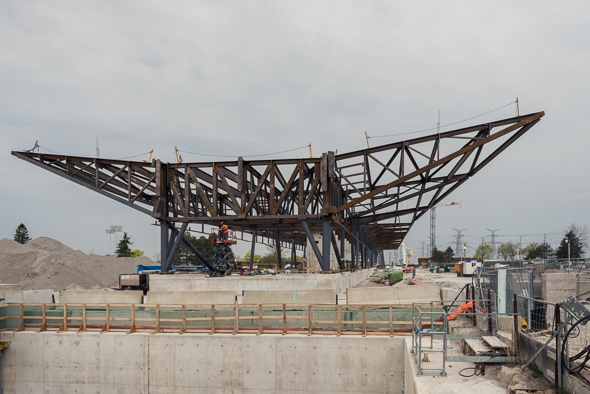 Heading north, quirky Pioneer Village station is the last of the stations located inside the City of Toronto. Right now, the massive winged roof of the bus terminal is still a steel skeleton. By the end of 2017, when the line is due to open, it will shelter passengers arriving and departing on TTC and York Region buses. 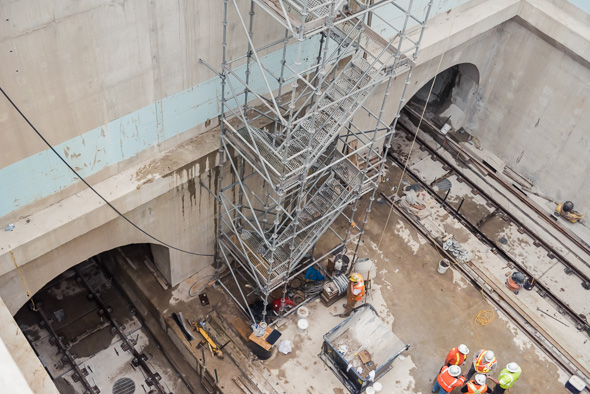 This access point south of Pioneer Village station will covered over in the next two years. At the bottom, a small platform area will allow workers to access a special crossover section of track. 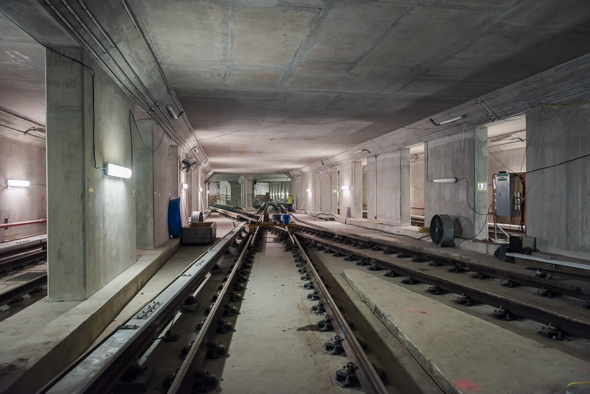 Just south of Pioneer Village station platforms is a special section of track that allows trains to cross between the north and southbound tracks. "If we had an emergency somewhere we could make [Pioneer Village] a terminal," says TTC spokesman Brad Ross. "We may use it for service adjustments in the morning. Right now at St. Clair West station we turn every second train. We may do that in this case as well, depending on in the early going how the service is going to operate." 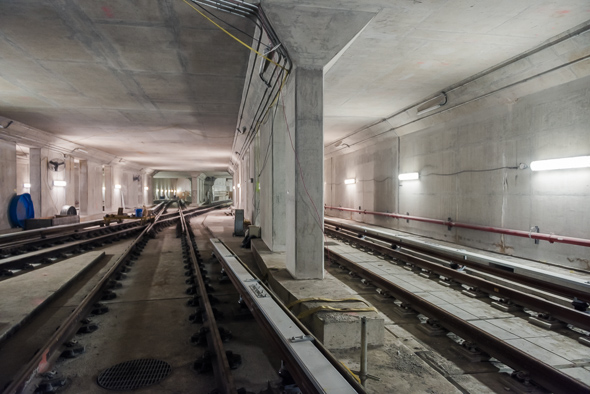 There are other crossovers like this in the TTC system: at St. Clair, College, and King stations. "They're expensive to build so you don't put them at every station. You put them in strategic locations for service adjustments, but as well for emergencies," says Ross. The crossovers at St. Clair, College, and King will be activated when Automatic Train Control is up and running on Line 1 line by 2020, Ross says. 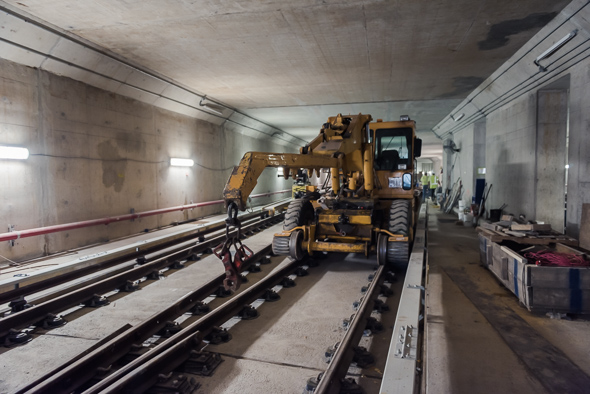 Though the tracks are 70 percent installed, not even the TTC's own works trains can travel north of Downsview yet. Vehicles like this gasoline-powered crane with built-in train wheels do the heavy lifting underground. 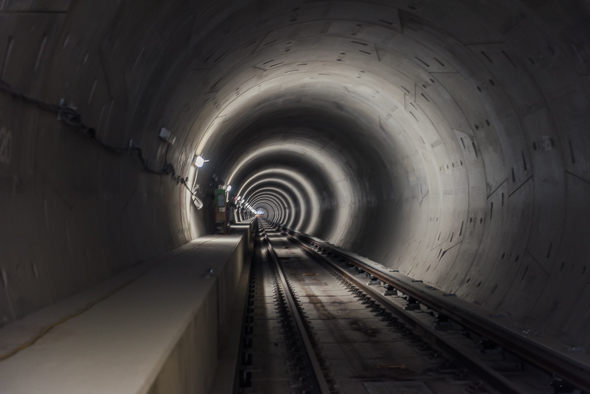 The tunnel between Pioneer Village and York University station is dead straight. So far just the running and electrical rails have been installed. Workers are still connecting up the permanent lighting, signals, and other critical infrastructure. 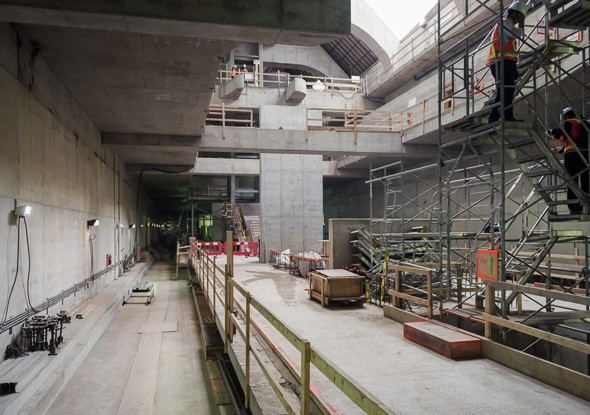 Boomerang shaped Highway 407 station will have an 18-bay bus terminal for GO, TTC, and York Region services, a 550-vehicle parking lot, and a direct connection to the toll road near the interchange with Highway 400. The TTC says the station is about 90 percent complete. Escalators still need to be installed on the large concrete piers visible in this photo, however. 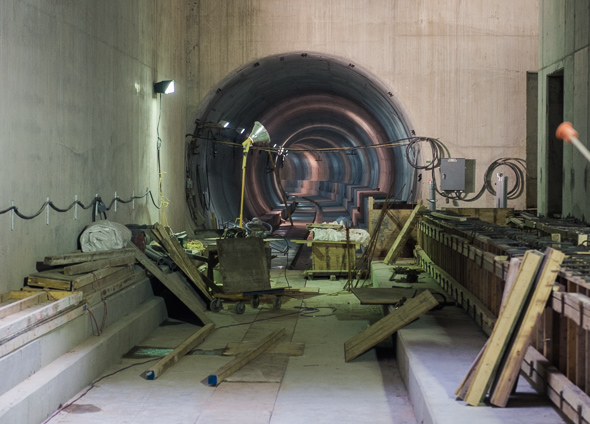 Construction of the Highway 407 station box required Black Creek to be diverted and channeled underground, a project that was completed in 2010. Like other stations on the line, it too will feature a large central atrium designed to channel natural light down to the platform level. The next stop is the end of the line at Vaughan Metropolitan Centre. 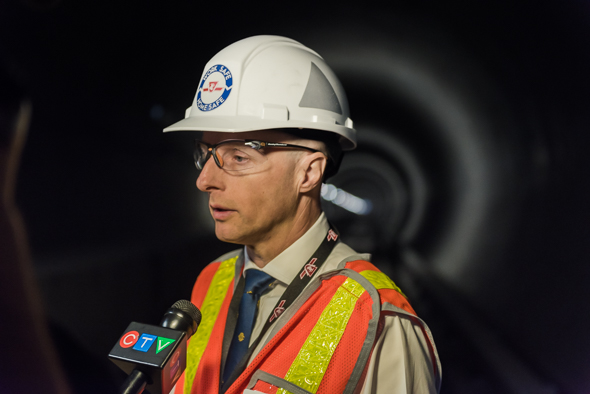 TTC CEO Andy Byford says he's confident the troubled project can be completed by the end of 2017.