Everything to know about the skunks of Toronto

You might be hard pressed to see a skunk in Toronto, but chances are you will smell one some time this spring and summer. The acrid burnt-rubber stench of freshly deployed skunk spray is often the only lingering clue that one of these retiring members of the weasel, otter, and marten family have been on your street.

"You don't see them as much or as often as raccoons because there aren't as many," says David Sugarman from the Ontario Science Centre. "Skunks continue to be very shy, even though they've got tremendous weaponry in their smell production, they really are quite retiring. They really would much rather just find something to eat and go back to their dens."

Typically skunks live in small burrows, underneath sheds, porches, or decks, sometimes in the hollow of a woodpile. They don't like to climb, and unlike raccoons, they won't make a home in your attic crawlspace or roof of your shed. What keeps skunks hanging around in cities like Toronto, like many critters, is the abundant availability of food.

As devoted omnivores, urban skunks are happy to pick through food scraps discarded by humans. In the wild, however, a typical menu consists of grubs, slugs, nuts, insects, bird eggs, and other small mammals, like mice. Because of their fearsome defence mechanism, few animals like to eat skunk.

Great Horned Owls, which have a dull sense of smell and razor sharp talons, are the only animals that regularly prey on the malodorous mammals, Sugarman says. 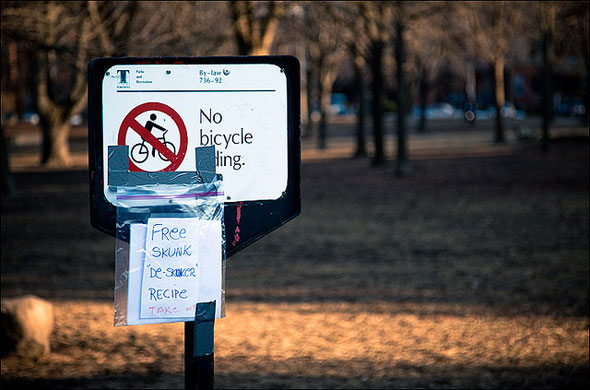 And what a defence mechanism that spray is. A pair of glands near the skunk's anus secrete about 28 ml of sulphurous alcohol so potent it can cause temporary blindness. Still, given a choice, skunks would rather not use it, especially as they have a good sense of smell themselves and are not immune to its powers. In disputes over mates or food, males wisely tend to use their teeth and claws instead.

"They only have enough to spray about five or six times, and then it takes 10 days to replenish their supply," Sugarman says. "It takes a fair amount of metabolic energy to make these fancy chemicals that come out in the spray."

Skunks also have killer aim. Tests have shown they are able to accurately target their defensive ejections up to five metres away, a fact made all the more remarkable considering the creatures must turn around prior to release.

Sugarman says a mix of baking soda, peroxide, and dish soap is scientifically proven way of removing the smell, should you or a pet get hit. (Tomato juice and other popular home remedies tend to mask the sulphurous stench rather than break it down.)

Typically skunks only live about five years, about the same as a mouse. The males are solitary, polygamous creatures that play no role in the raising of the young. Females usually give birth to a litter of four to seven "kits" in the spring, which may explain why there's an uptick in skunk-related stenches this time of year.