A brief history of the King Edward Hotel in Toronto

George Gooderham had his fingers in many pies. As a son of the co-founder of the Gooderham & Worts distilling company and later a partner in the internationally renowned business, the English-born amateur yachtsman had the financial backing to pursue all manner of additional projects.

His offices were located inside the famous Gooderham Building (nicknamed "flatiron" for its resemblance to a clothes iron,) but it's the King Edward Hotel, which turns 112 this week, that perhaps best encapsulates the prolific businessman's legacy.

During the latter decades of the 19th century, every major city in North America aspired to become home to a "palace hotel"--a luxury residence capable of hosting royalty. New York had the Waldorf, Quebec City had the Ch창teau Frontenac, and Montreal the Windsor. Toronto had the Queen's Hotel, but "it wasn't a place where you'd be proud to have the actual Queen stay," writes Mark Osbaldeston in Unbuilt Toronto 2. 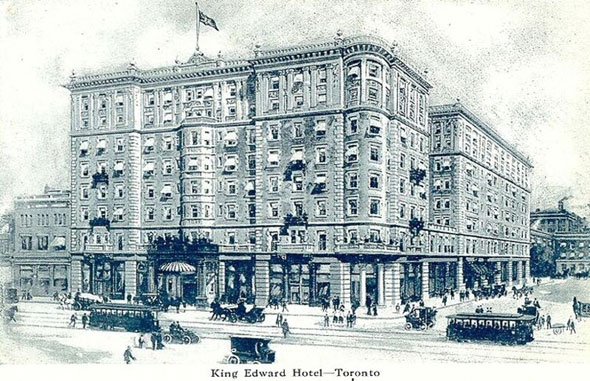 With a view to rectifying the situation, the board of the Toronto Hotel Company held their first meeting on May 1, 1899. The group of 17 prominent businessmen had appointed themselves the task of getting an as-yet unnamed luxury hotel venture off the ground. An earlier proposal to build a grand hotel at the northwest corner of King and Simcoe by the same group had fallen through, and the parcel of land at King and Leader Lane represented a chance to start fresh.

The company initially approached New York architecture firm Harding and Gooch, which dutifully produced a design for a seven-storey, 325-room structure with a grand entrance on Leader Lane flanked by a pair of grand towers, a retail arcade facing Victoria St., and a luxurious rooftop garden

Instead of proceeding, the Hotel Company directors opted to hire Chicago architect Henry Ives Cobb, the creator of the Fisheries Building at the World's Columbian Exposition in 1893 and several other important buildings in the U.S.

Cobb set up a branch office in Toronto and hired E. J. Lennox, the designer of Old City Hall and Casa Loma, to work alongside him. Lennox's most conspicuous contribution, Osbaldeston notes in Unbuilt Toronto 2, was the addition of two terra cotta-clad floors to the blueprint after construction had begun. According to historian Sally Gibson, Gooderham chipped in elements of the design, too. His signature is on a 1901 plan for the rotunda. 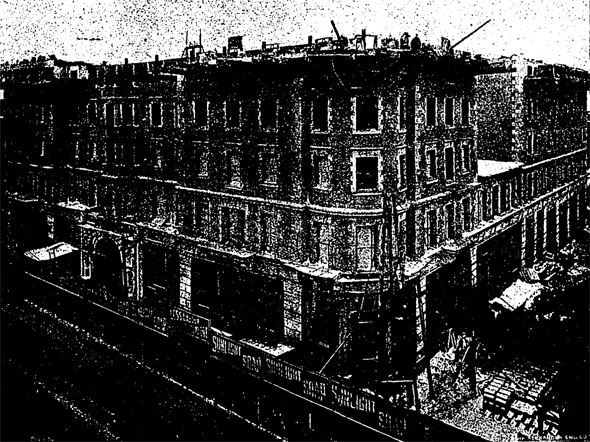 Construction began in earnest in September, 1901 under the supervision of Illsley & Horn, general contractors. Original estimates pegged the total cost at $800,000, but that would soon prove insufficient. As the building began to rise, so too did expenses. Compounding the worsening financial situation, only $500,000 of the bonds issued by the hotel company had been sold--$100,000 of them to George Gooderham personally.

Fearing the project might fail entirely, Gooderham bought the entire remaining $1 million of bonds in 1902. Cobb left and E. J. Lennox became the principal architect soon after the Antwerp-sourced steel frame of the building began to rise. By the end of 1901, the ground floors had been clad in brick and the structure was beginning to take shape. 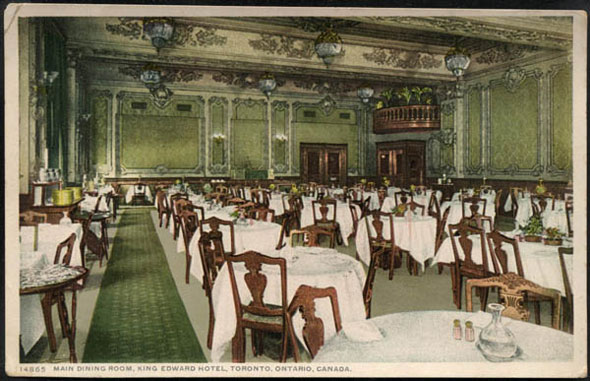 Work progressed through the winter and in the late summer of 1902 a mock-up of one of the hotel suites and the main dining room was presented to the public at the CNE. The bedroom had mahogany-panelled walls, and English Wilton carpets. Wedgwood china was arranged on a dining table with Rogers steel cutlery and cut glass drinking vessels. The dinner, oyster, and bread and butter plates each carried the hotel's coat of arms, which was created by the winner of a public design competition.

Each room was to be fitted with a mahogany dresser, mirror, and writing desk, and the chairs were upholstered in flowered velour. Long distance and inter-room telephones and adjustable radiators were also expected to be standard.

"This King Edward Hotel is going to be a delightful and most complete place," gushed the Globe. 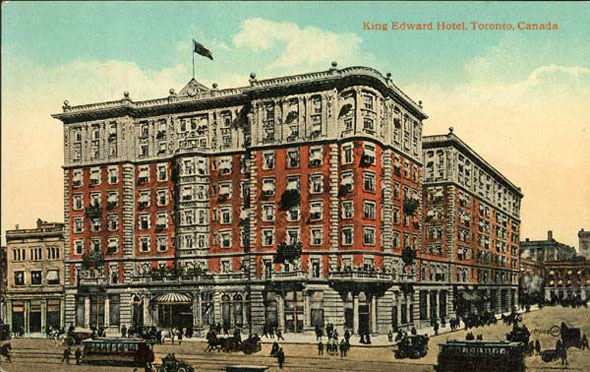 The King Edward Hotel opened to little fanfare on May 11, 1903 (the grand opening ceremony was scheduled for a week later to coincide with the Royal Canadian Yacht Club's lavish annual ball.)

George Gooderham was the first name in the register, followed by the directors of the company who had seen the project to fruition. John A. Davidson, who supplied the marble work for the main entrance hall, was given the honour of being the first member of the public to sign in. The Chicago-based superintendent of construction, J. E. Graham, joined Davidson in handing over the first payment--a U.S. bill that was kept and framed. 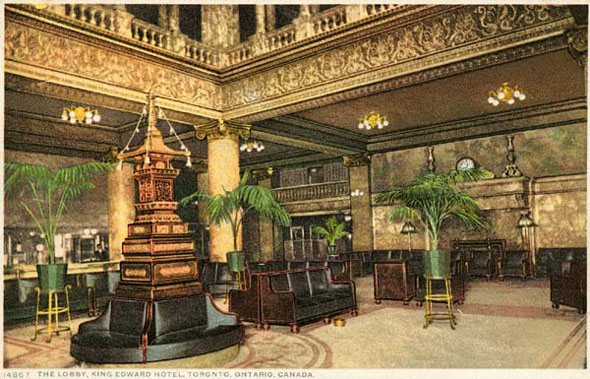 "All day long the procession [of visitors] continued in and out, up and down, through the corridors," the Globe wrote on opening day. "On every side were heard expressions of wonder and admiration for the beauty of the building and the appointments ... the bar was well patronized, in fact so well that at one time in the afternoon it was necessary to close it until the staff could overtake their work."

Of all the King Eddy's features, the lush Palm Room attracted the most attention. Up a set of stairs from the rotunda, the lush, plant-filled room was furnished with comfortable chairs and couches on which the society ladies of Toronto could drape themselves. An English woman, "Mrs. Cornish," was imported from London especially to oversee the luxurious surroundings.

For men, there was a combined cigar shop and newsstand, a luxury barber shop, and billiard room. The Bar and Gentlemen's Cafe on the main floor had antique oak panels, writes Sally Gibson, oil paintings of hunters pursuing their prey, deep leather chairs, and, of course, a stock of Gooderham &Worts whisky. 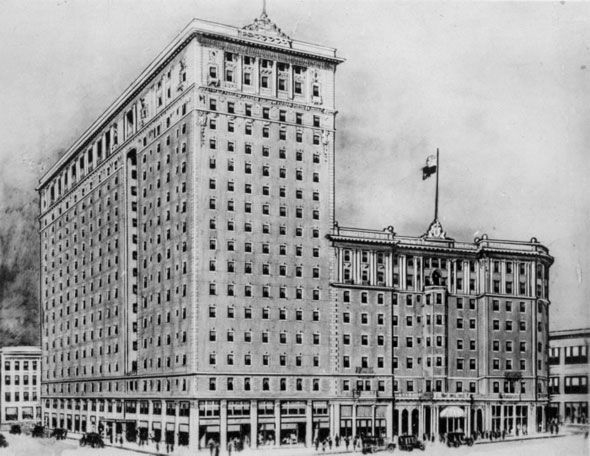 The popularity of the hotel in its early years necessitated the construction of a 500-room extension to the east end of the building. Completed in 1921 at a cost of around $2 million, the new 18-storey wing included a top-floor banquet and convention hall--later known as the crystal ballroom (and now unfortunately derelict.)

Gooderham wouldn't live to see it his hotel expanded, however. He died in 1905 of pneumonia.

Happily for Toronto, the King Edward was listed as a historic structure in 1973, 23 years after becoming a Sheraton hotel. A plan to demolish the building for a 30-storey office tower was successfully seen off in 1974, saving the "grand old lady of hotels" from an ignominious end.

A $40 million restoration of the lobby is due to wrap up later this summer, the hotel's 112th year.

Note: An earlier version of this post misattributed the source of the Gooderham Building's "flatiron" nickname to the New York skyscraper of the same name. As was correctly point out in the comments, the Toronto structure is 12 years older than Daniel Burnham's famous tower.