With Spring weather supposedly right around the corner (forget the official date), now seems like a good time to remember that the outdoors isn't always a grey and forbidding frozen wasteland.

In fact, it's quite nice out there when the sun is shining and the grass of city parks is soft and green. The amateur boxing matches (above) might have been replaced by drum circles and off-leash dog parks, but Toronto's parks still serve the same vital role they did 100 years ago. In short, they are our communal back yards.

This is what Toronto parks used to look like. 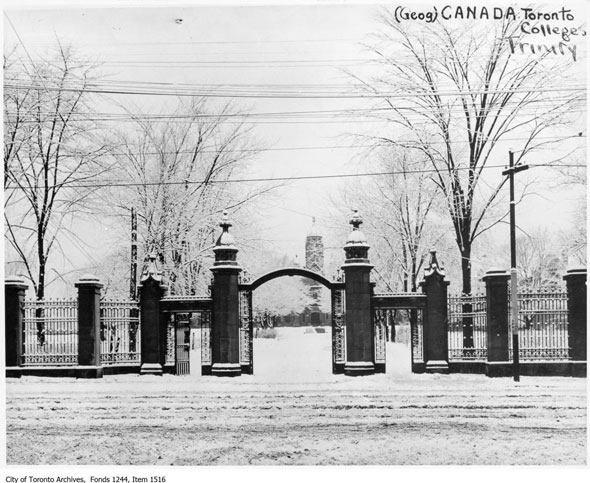 The gates of Trinity-Bellwoods Park on Queen St. W. The park was originally the grounds of Trinity College, an Anglican educational institution founded in 1851 by Bishop John Strachan, the first bishop of Toronto (think Strachan Ave.) The college was merged into the University of Toronto and the original Gothic Revival building closed in 1925. It was eventually demolished in 1956.

The view of Trinity College and Gore Vale (right,) a three-storey red brick home owned by Francis Gore, who was Lieutenant-Governor from 1806 to 1817. After a brief period as a hospital, the home was knocked down in the 1920s. 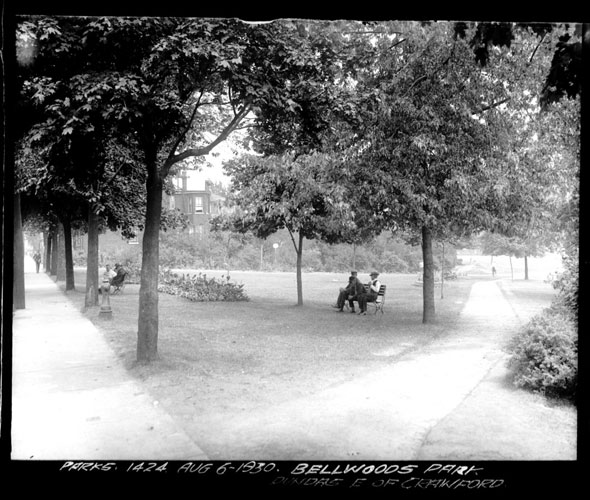 After Trinity College moved to its current location on Hoskin Ave., the old grounds were turned into a public park by the City of Toronto. 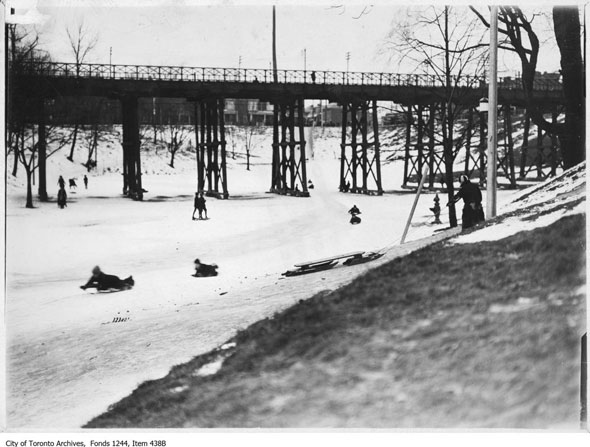 Though there are still some hills in Trinity-Bellwoods, much of the original geography has been erased. Garrison Creek, a quite substantial river despite the name, used to run through the grounds from north to south. Its steep-sided ravine was popular with tobogganers. 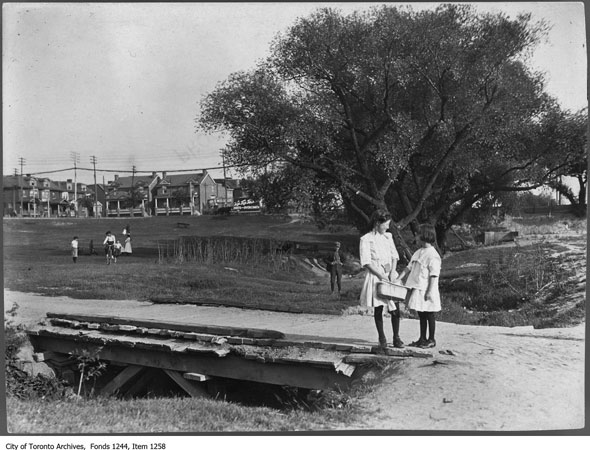 Girls in Christie Pits Park near a makeshift bridge over a small stream. The green space on Bloor St. W. was once the site of a gravel pit (hence "pits") and was originally called Willowvale Park. 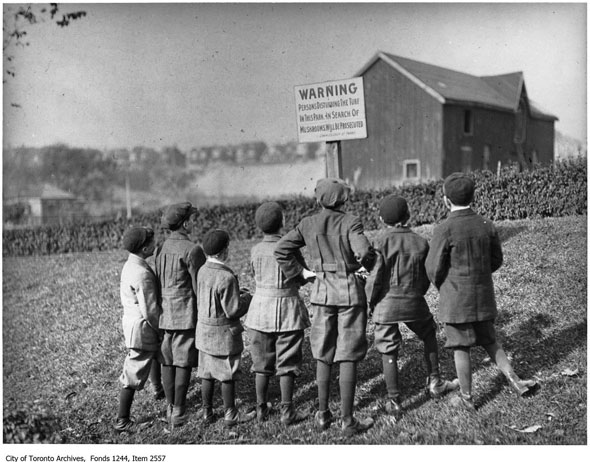 Boys pose for a staged photo in front of sign warning against "disturbing the turf in search of mushrooms." Truffles perhaps? 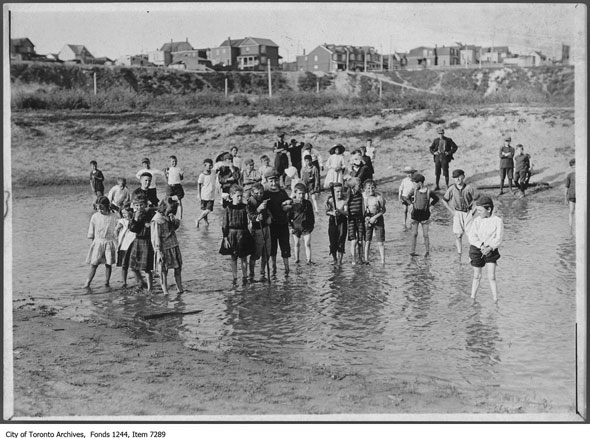 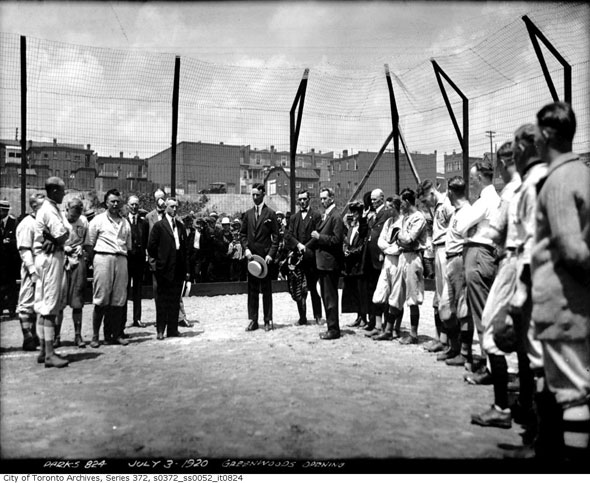 Baseball in Greenwood Park on opening day, July 3, 1920. Like Christie Pits, Greenwood was also built on top of a former quarry. 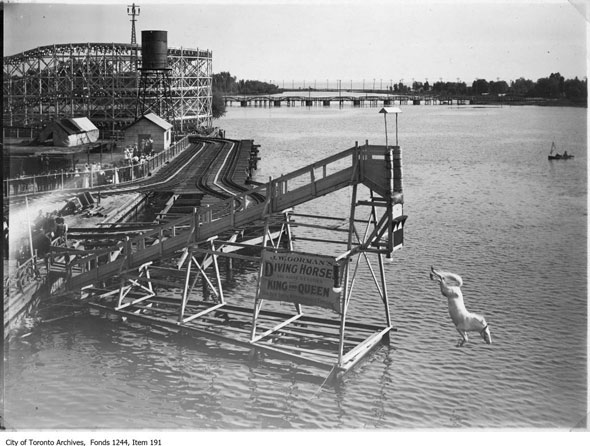 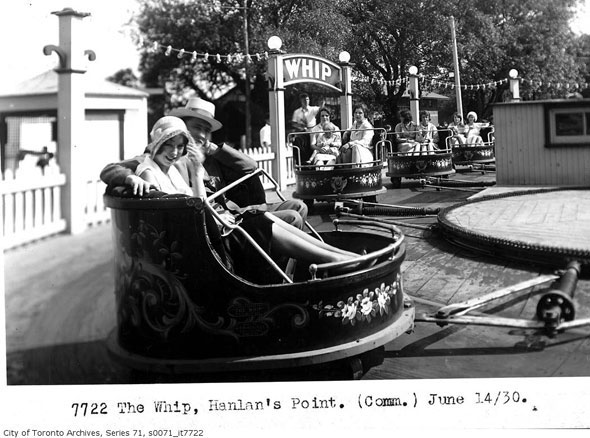 Hanlan's Point was also home to the ball park where a young Babe Ruth hit his first professional home run. After a period of decline in the late 1920s, the last amusements, including the Whip, closed for good in the early 1930s. 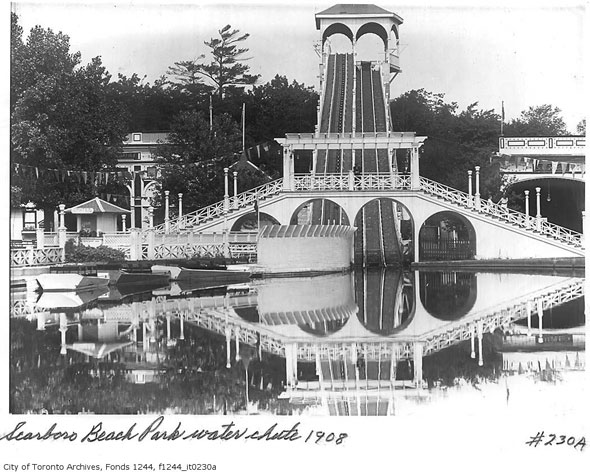 Located on Queen St. E., ScarboroBeach Park was another popular summer amusement park. Central to the waterfront attraction was a massive log flume. Today, the portions of Hammersmith Ave., Scarboro Beach Blvd., and Glen Manor Dr. south of Queen St. E. cut through the former site of the park. 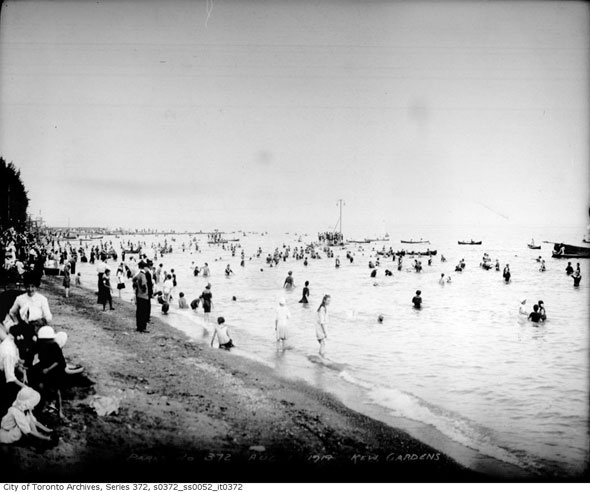 Just to the west of Scarboro Beach Park was "The Canadian Kew Gardens." Promising "innocent amusements" such as tennis (below,) camping, swimming, and sledding in winter, the park was a stark contrast to the in-your-face pleasures available just down the street. Founder Joseph Williams named the park after Kew in London, England. He must have really liked the name because he called his son Kew, too. 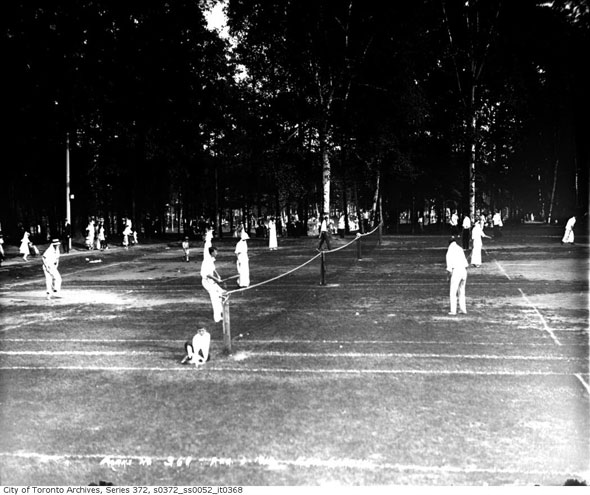 Kew Gardens was sold to the City of Toronto in 1907 and cleared of many of its buildings. A stone, city-owned structure on the waterfront used to rent bathing suits and towels to swimmers, but has since also been razed. 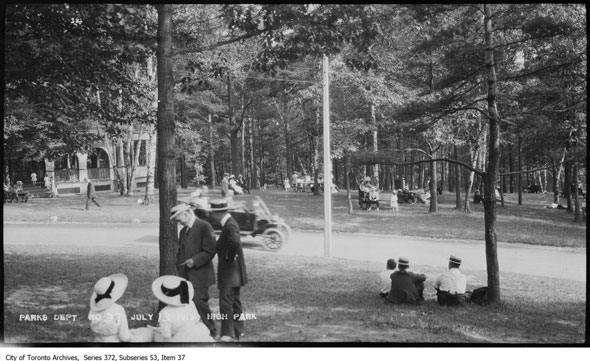 Straw hats and cars on Half Mile Rd. in High Park during the summer of 1912. 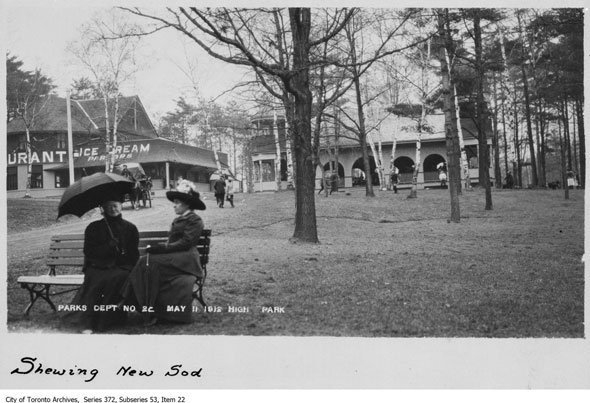 A restaurant and ice cream parlour in central High Park, 1912. 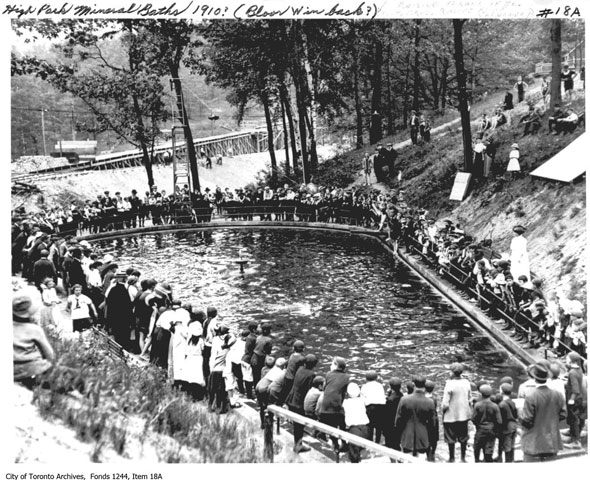 The High Park Mineral Baths were located in a natural swimming hole at Bloor St. W. and Clendenan Ave. As David Wencer writes at Torontoist, the business was operated out of a house on nearby Gothic Ave. and directly associated with a U.S. sanitarium run by anti-masturbation advocate and Corn Flake magnate Dr. John Harvey Kellogg. The spring-fed pools, nicknamed "The Minnies," closed and were filled in in the 1960s during construction of the Bloor-Danforth line. 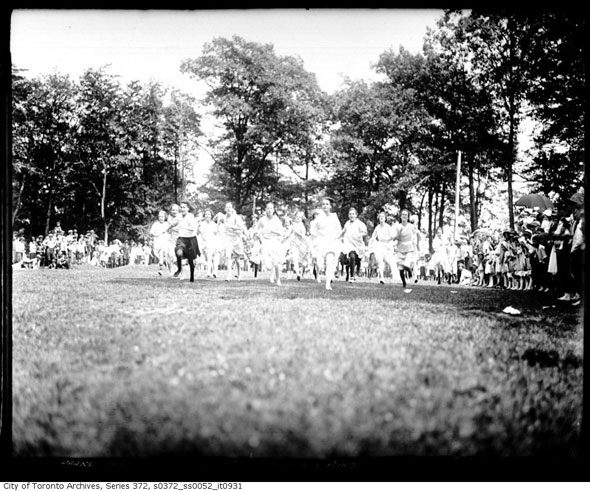 A group of women during a race in Monarch Park, near Danforth and Coxwell avenues. 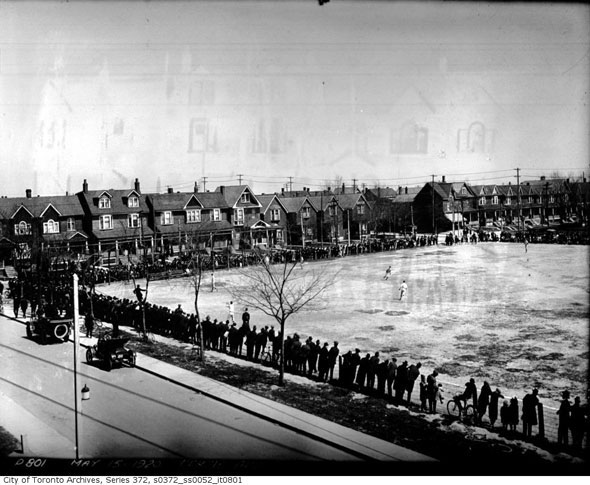 Aerial view of the Perth St. Playground in the Junction Triangle, 1920. 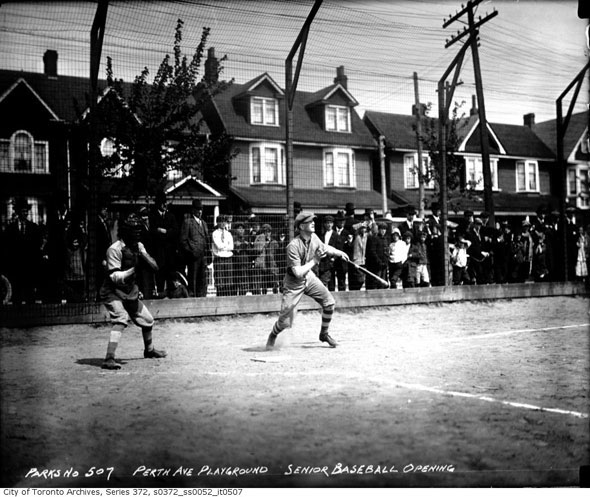 The Perth Ave. Playground was a popular baseball venue. Several junior and senior teams used the diamond during the 1920s. 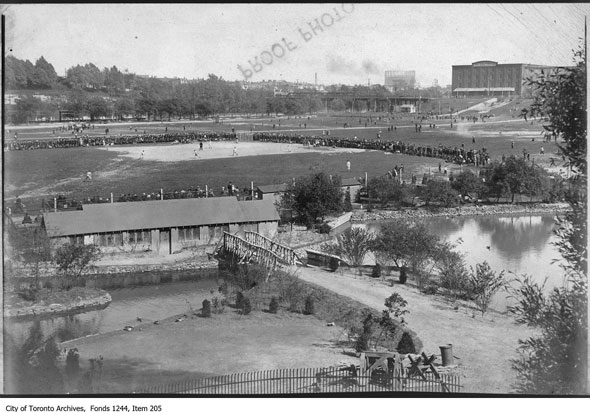 Looking south over Riverdale Park circa 1914. The factory building in the background is likely the Kemp Manufacturing Co. Ltd., a maker of stoves, ranges, and other metal products which used to be located at the southeast corner of Gerrard and River streets. The circular building in the distance is one of the storage tanks belonging to the Consumers Gas Company on Eastern Ave. 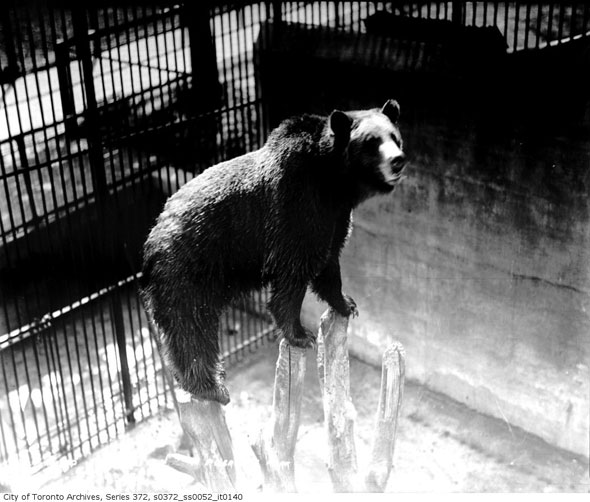 A black bear in a tree at Riverdale Zoo. During its 75-year history, the east end menagerie was home to camels, hippos, monkeys, sea lions, an elephant named "Princess Rita," and many other animals patently too large for the tiny property. The zoo closed in 1975 and was replaced by the Metropolitan Toronto Zoo. Riverdale Farm, which specializes in rare animal breeds, opened on the site in 1978. 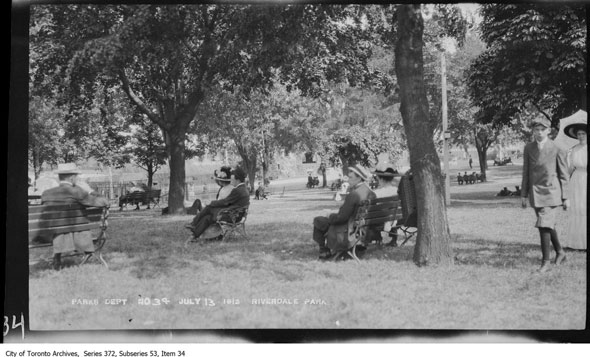 More straw hats on display in Riverdale Park in July 1912.

Looking over the rail corridor in a pre-Don Valley Parkway Riverdale Park. Look closely at the top of the hill: there's a wooden structure belonging to the massive winter toboggan runs that used to be set up in the park. 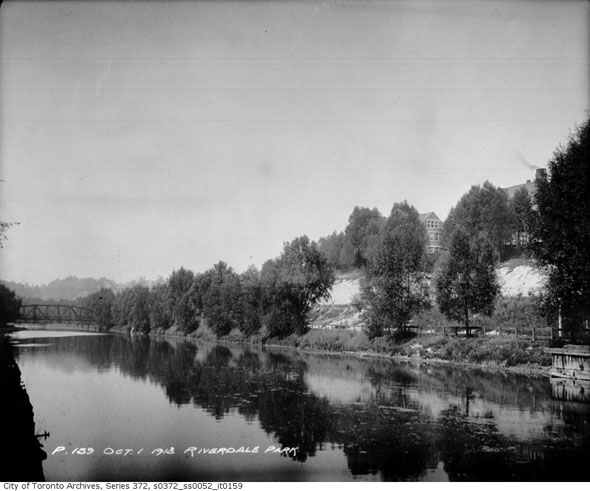 A lush Don River just south of Riverdale Park in October 1913. The buildings at the top of the bank were part of the Isolation Hospital, which treated people suffering from contagious illnesses such as diphtheria, scarlet fever, measles and polio in a controlled environment away from the crowded city centre. Today, Bridgepoint Health occupies the site.