This is what it's like on board a Redpath sugar ship

Winter is officially over, at least according to the Toronto Port Authority. The first ocean vessel of the 2015 shipping season, the M/V Tundra out of Limassol, Cyprus, arrived in the harbour Monday, carrying with it roughly 19,500 tonnes of raw sugar from Santos, Brazil.

For being in charge of the first ship to call in Toronto since the melting of the winter ice, Captain Volodymyr Ovidiyenko was presented with an 154-year-old felted beaver skin top hat, a bizarre tradition that dates back centuries. 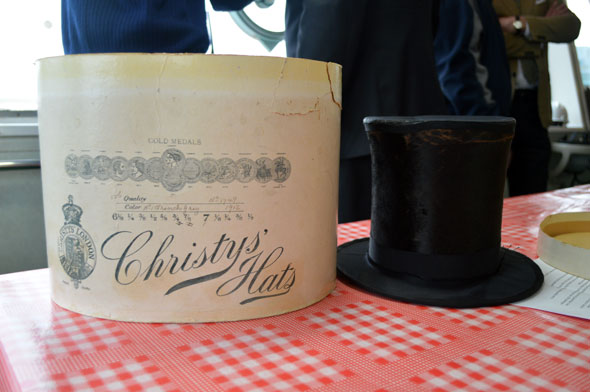 Crafted by Christys' Hats of London some time before 1860, the hat was brought to Toronto by British-born captain John Hooper Meade at a time when the city relied heavily on the harbour for food and other vital commodities.

What lured sea captains more than the chance to don a slightly iridescent head covering, however, was the cash prize that used to accompany it. By offering a financial reward, the Toronto Port Authority hoped to lure ships to the city sooner, thereby lengthening the shipping season.

As a bonus, the lucky (and suddenly flush) winner was allowed to keep the hat for 24 hours. But after years of abuse by rowdy sailors, and numerous repairs of varying quality, that part of the tradition was halted and the hat was transferred to the PortsToronto archives. Today, it only comes out on special occasions.

"For me, it's the first time, so thank you," said the Ukrainian Ovidiyenko. "It's [my] first time and I'm so pleased."

Here's a look at what the M/V Tundra and all that sugar looks like up close. 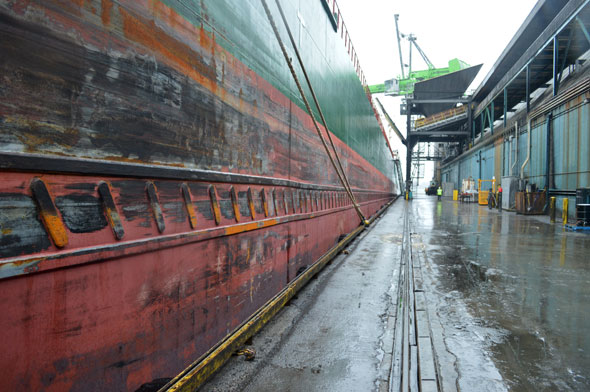 The M/V Tundra was built by Weihai Shipyard in Shandong Province, China, in 2009. It's 185 metres from front to back and 23.7 metres wide. During normal service it travels at 13 knots, about 25 km/h. The Tundra's six holds have a combined 15,632.89 cubic metres of bulk cargo space, which today is occupied by lots and lots of sugar, but sometimes it holds corn, wheat, or soya beans. 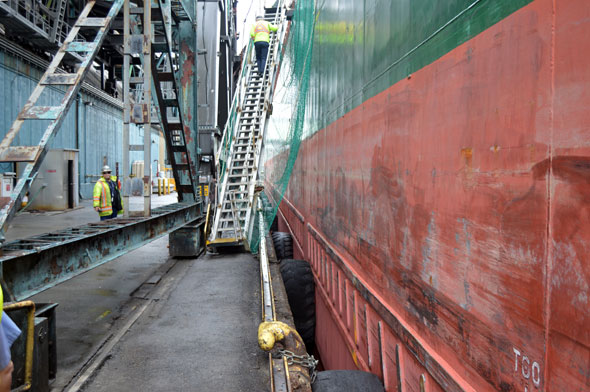 The temporary steps up to the ship's deck are tippy and soaking wet. Only three people are allowed on a time. "I've seen some shit with these stairs," says one of the workers at the bottom. 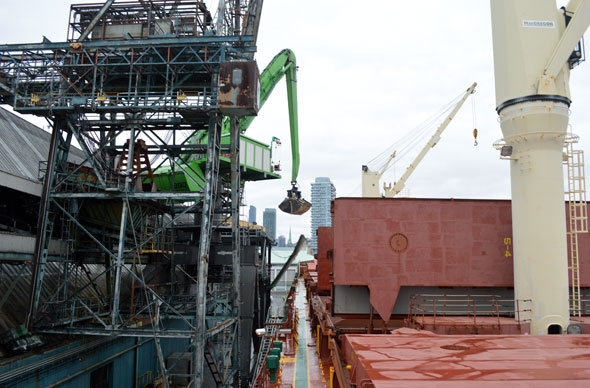 Although the Tundra has cranes of its own, Redpath performs the unloading in Toronto. It will take about three days to completely empty the ship of its cargo. The last of the sugar should be in the factory by midnight tonight. 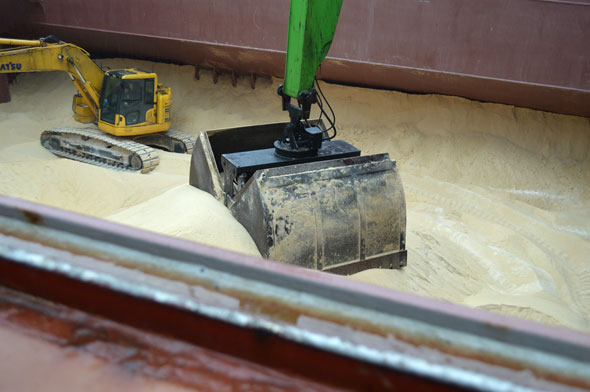 The raw, unprocessed sugar is shipped inside covered containers during the ocean voyage. In port, the Redpath cranes reach inside and scoop it out with the help of a smaller digger. The gigantic proportions inside the hold play tricks on your eyes. 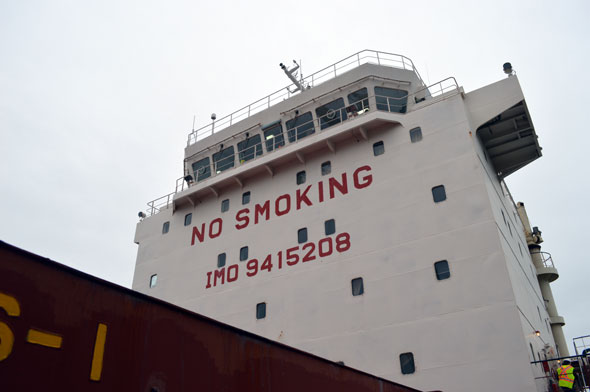 Despite the massive "no smoking" sign painted on the outside of the ship, the Tundra actually has a smoking room for its mostly Ukrainian crew. When I poke my head inside, a chef is sitting with a cup of coffee watching DVDs. 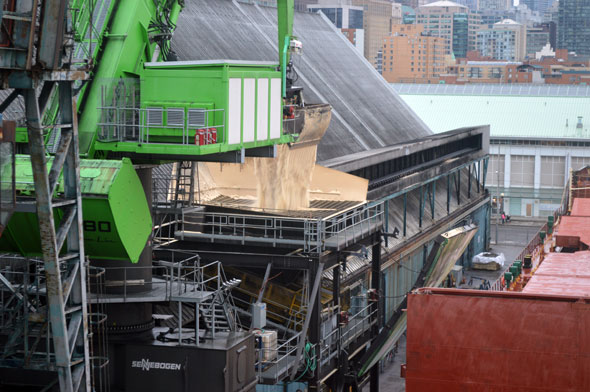 The bright green Redpath crane deposits the sweet cane sugar into a massive hopper. Conveyor belts move the product around the facility prior to the refining process. 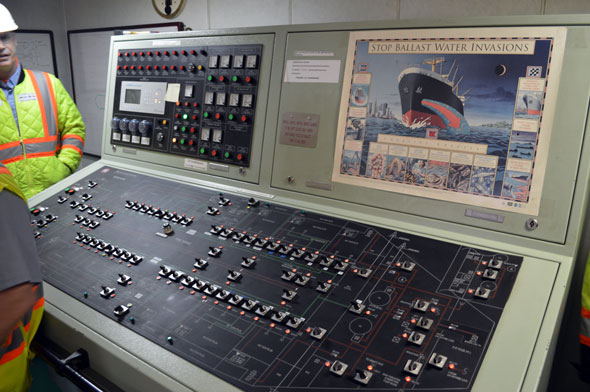 Immediately inside the Tundra there's a control room dedicated to managing ballast. Storing ocean water in tanks deep within the bowels of the ship ensures the propellor and rudder stay submerged, even when the hold is empty and the Tundra is more buoyant. The poster warns against discharging potentially invasive foreign organisms when emptying ballast. 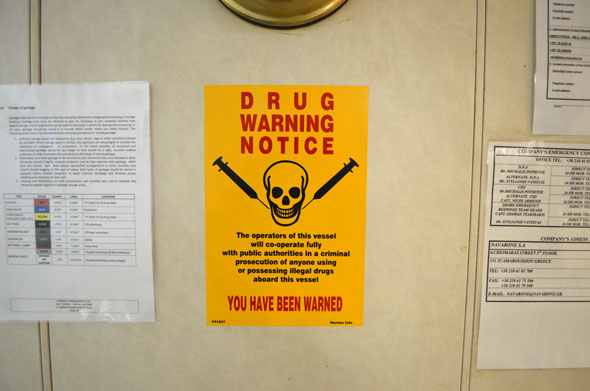 Like Pearson, the Toronto waterfront is a port of entry into Canada. Drugs are not tolerated. 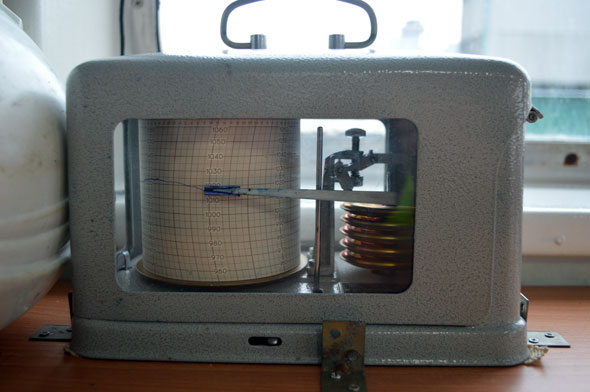 This barometer keeps track of atmospheric pressure. Sudden changes indicate wild weather ahead. "During this voyage I had to change course to avoid some storms. I lost maybe 50 miles, but I avoided the storm," says Captain Ovidiyenko. This, of course, is an antique. Ovidiyenko uses sophisticated satellite and radar information on the control deck when making navigation decisions. 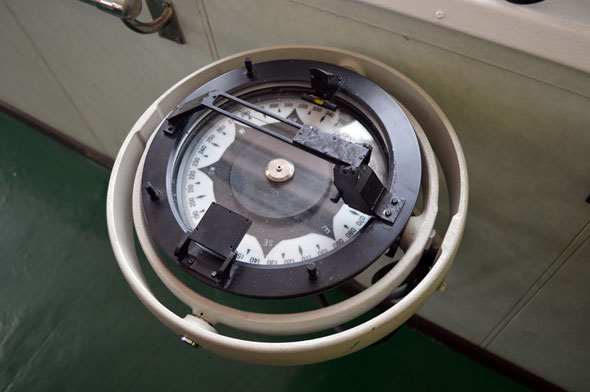 The ship might only be six years old, but it has plenty of analogue technology on board in case of a technical failure. This is the Tundra's compass. 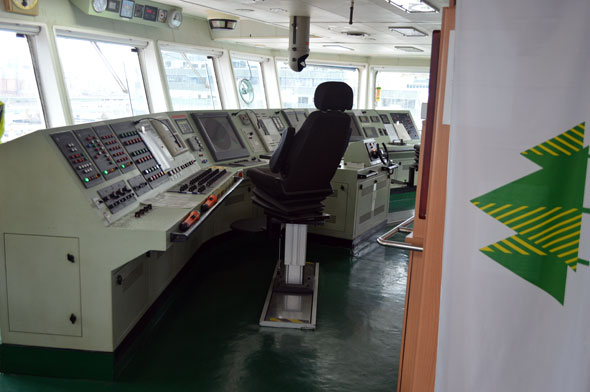 There are two seats on the bridge and a dizzying array of screens and buttons. It took about 20 days to make the journey up from Brazil, Captain Ovidiyenko says. "It was a different temperature. 40 degrees in Santos and here at the entrance to the St. Lawrence was -10." After unloading in Toronto, Ovidiyenko will return to Ukraine, but the ship will continue to Thunder Bay and Hamilton to fill up with wheat. After that, it's on to San Juan in Costa Rica. 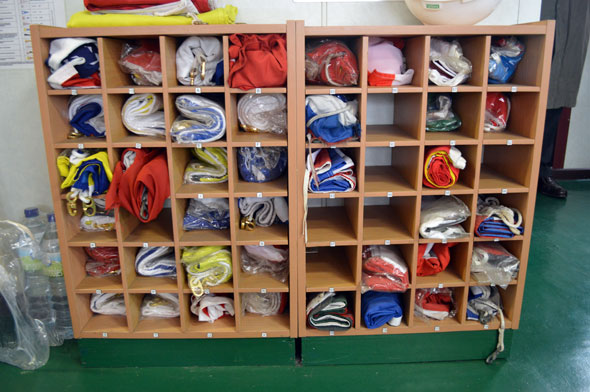 In total, there are 93 flags in the Tundra's inventory, covering 92 countries. Today, the flag of Canfornav, the Tundra's chartering company, is flying on the main deck. 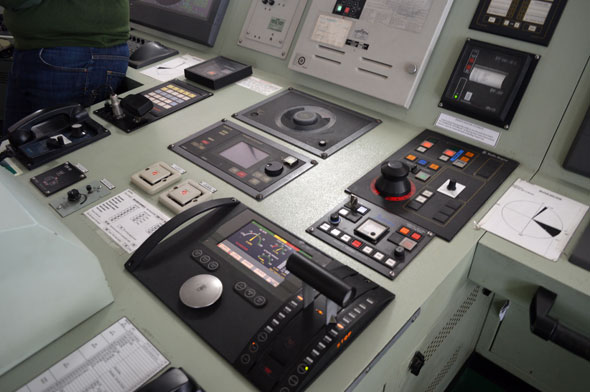 This lever controls the main engine, a Korean-made STX Man B&W. The giant power unit produces about 9,655 brake horsepower. A typical car engine generates less than 200 BHP, for comparison. The fuel tanks aboard the Tundra hold 1,633.7 cubic metres of diesel. 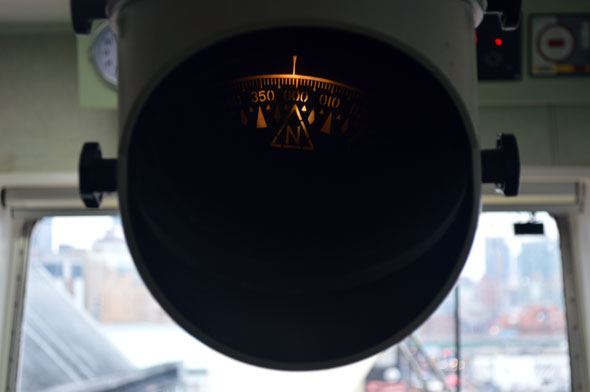 Though the control deck has large forward windows with panoramic views of the deck, visibility in other directions is limited. A periscope with built in compass helps Captain Ovidiyenko keep track of his surroundings. 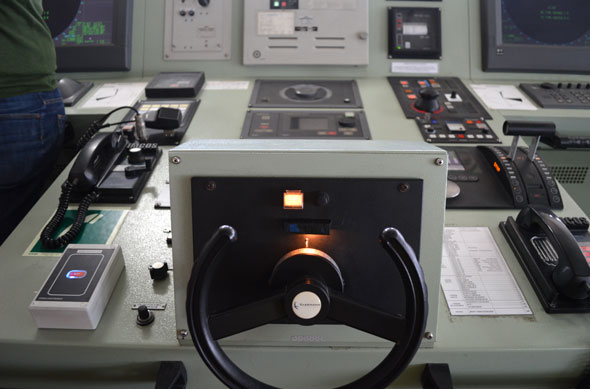 This wheel steers the M/V Tundra when it's at sea. At low speeds and in the tight confines of the Toronto harbour, tugs controlled by skilled pilots take over, guiding the ship safely into its waterfront slip.

The M/V Tundra is due to be towed out of the Redpath refinery and onto the lake in the early hours of tomorrow morning. It probably won't return for several months.