2,000 cherry trees is a big present - even for a city the size of Tokyo. In fact, High Park's forest of sakura, which was shipped from Japan to Toronto and planted during the early months of 1959, was the biggest gift of its kind in the years following the second world war.

It was to be, in the words of Robert Kadoguchi, a man central to arranging the shipment, "a tangible expression of [Japan's] gratitude to [Toronto] for accepting us warmly during the distressing period of the Second World War and the years immediately following the termination of hostilities."

The roots of the gift lie in the plans for the Japanese Canadian Cultural Centre, which in 1959 was still in the planning phase.

29-year-old architect Raymond Moriyama, who would later design the Toronto Reference Library, Ontario Science Centre, and Bata Shoe Museum, was in charge of the a blueprint for the intricately detailed complex to be built near the Don Valley Parkway at Eglinton Ave. 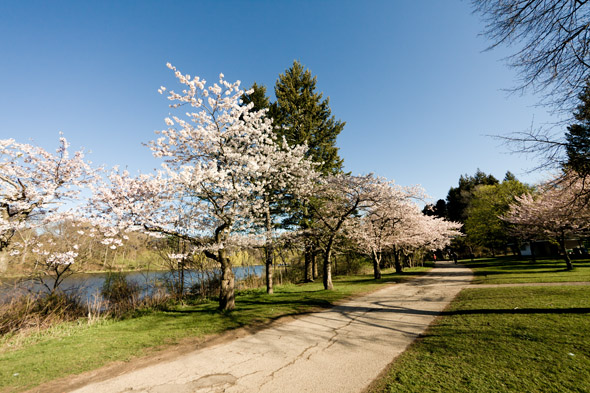 Part of Moriyama's design was to be a peaceful grove of 2,0000 cherry trees the JCCC organizing committee had secured as a gift from the city government of Tokyo.

Long a symbol of Japan, the trees with their fleeting pink blooms were frequently given as gifts to foreign nations following the second world war. The University of British Columbia received 1,000 for its Japanese garden in 1958. Port Dover, Ontario, was sent 20 saplings the same year as thanks for a bale of clothing sent by the local Lions club after the conflict had ended.

It was decided after Tokyo had agreed to ship the trees that they would be best placed in a public space, like a city park. 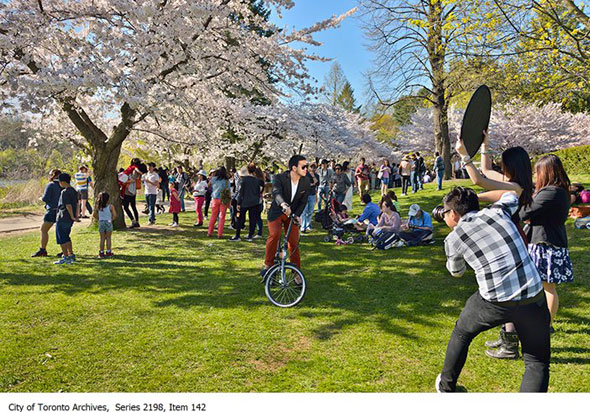 Still, Toronto initially didn't know what to do with Tokyo's gift--the largest of its kind in the world since the end of the war. Even as the trees were crossing the ocean from the port of Yokohama, city fathers were still puzzled about where to plant the orchard.

"I think we'll probably make representative plantings in all the parks around the city," city parks commissioner George Bell told the Globe and Mail. "We're not contemplating any special project with the trees." 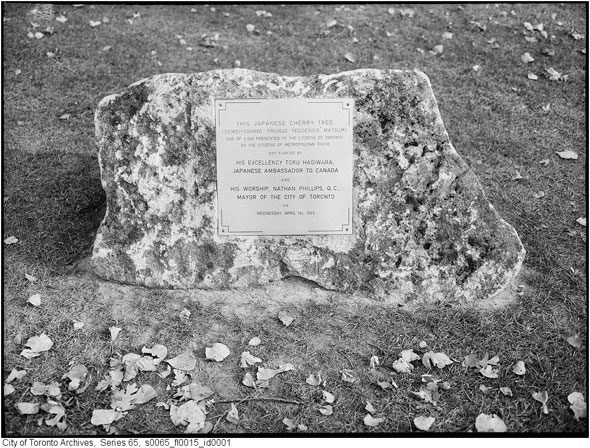 High Park was selected as the location for all 2,000 trees in March 1959, despite opinions from some city aldermen that the saplings be shared around the city. Bell said his staff had considered locations on the waterfront and North Toronto, but that High Park was the location preferred by Tokyo--"to give a mass effect much as they have in Washington."

Perhaps concerned Toronto wouldn't do a good job installing the delicate forest, the technical chief of Tokyo parks division was sent to personally supervise the planting.

A month later, the cherry trees were officially presented to the city by Japanese Ambassador to Canada Toru Hagiwara during a special luncheon at the Grenadier Restaurant on April 1, 1959. In exchange for the trees, Mayor Nathan Phillips presented Hagiwara with a pair of City of Toronto cufflinks. "I hope you will feel honoured to wear them," he said.

"The flowering cherry trees have long been cherished by the people of Japan as their national flower, and this gift is meant as a gesture of friendship and goodwill," said Hagiwara. "My wish is that the trees will grow as a symbol of lasting cordiality between Canada and Japan."