Toronto has long fancied itself as an underground city. Since the early 1900s, when Boston and New York were excavating their first underground rail lines, this city has dreamed of building subterranean streetcar "tubes."

By heading beneath the earth, the citizens of Toronto could commute, move between downtown buildings, visit the Toronto Island, even drive through the core without being troubled by the unpredictable elements.

Unfortunately, for all its ambition, Toronto has a long history of finding ways to kill or indefinitely delay its tunnel projects, sometimes after construction has already begun. It hasn't always been the city's fault, but the fact remains, Toronto's tunnel building record is less than perfect. 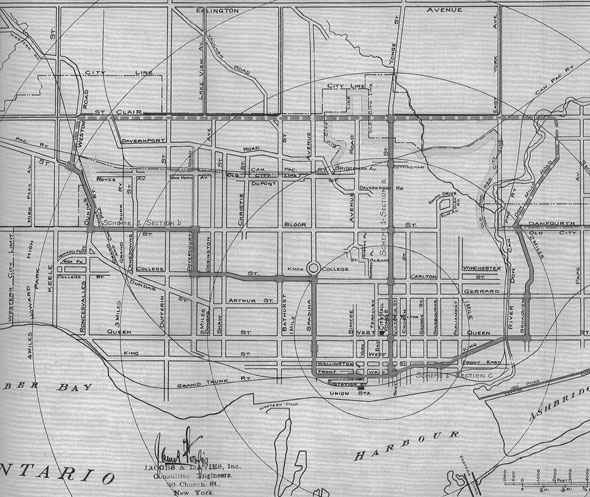 Toronto's subway dreams go back a long way. Long before the Yonge, University, Spadina, Bloor-Danforth or ill-fated Queen line were envisioned, controller and later mayor Horatio Hocken planned a network of transit "tubes" beneath our streets.

At the time, the city was locked in a legal battle with a private, pre-TTC streetcar operator, the Toronto Railway Company, over service to suburban areas. In response, Hocken conceived a transit system running beneath downtown streets that would circumvent the TRC's contract for "street" transportation.

At the request of the city, New York engineering firm Jacobs and Davies designed a three-line system centred on old Union Station. One line would run east to Broadview and Danforth. Another would terminate in the Junction, traveling via Front, Spadina, College, Dovercourt, and Bloor. The idea was thrown out in 1912 when voters rejected the $5.2 million cost of the initial phase of construction.

Traffic congestion has been a pressing issue in downtown Toronto for almost 100 years. In an effort to improve the flow of people through the city, we've built highways, subways, and streetcar lines. Trouble is, the various users of the road are often forced to battle it out for a finite amount of space.

In 1962, in an effort to improve the quality of downtown streets, the Toronto planning board briefly recommended making Bay and Yonge two-tier streets with pedestrian areas on the surface and roads underneath. The scheme mirrored one that has been in place in Chicago since the early 1900s, but was ultimately dropped in favour of the downtown PATH network for pedestrians. 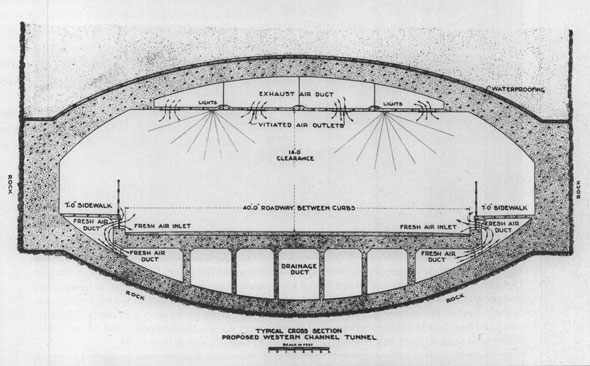 The Western Gap between the Toronto Island and the mainland is laughably small. The ferry ride between the airport and the foot of Bathurst St. covers just 121 metres and only takes 90 seconds. So really, it's not surprising that since the 1930s the city has seriously considered building a bridge or digging a tunnel to close the gap once and for all.

The 1935 proposal would have accommodated pedestrian and auto traffic (a controversial inclusion as the Islands were supposed to be a car-free retreat) and roughly followed the route of the present day ferry.

Construction started in October of that year, but $1 million in federal funding was revoked just two weeks later when the incumbent Liberals were ousted in a general election. It would take 77 years for work to start on the airport pedestrian tunnel.

Toronto came very close to building the Eglinton subway. A groundbreaking ceremony was held in August 1994 at Eglinton and Black Creek Dr., the western end of the five-station line (Allen, Dufferin, Caledonia, Keele North, and York Centre,) but not even putting shovels in the ground could save the doomed project, which was first proposed in April 1990 as an LRT line.

Premier Bob Rae's NDP were crushed in the 1995 election and the new Progressive Conservative government under Mike Harris indefinitely deferred the $750-million project.

A pit excavated at Eglinton West station for the line's tail track, the area where trains would turn around, was filled in. 25 years later, the tunnel boring machines and construction workers of the Eglinton LRT are currently hard at work.

Continuing a storied local tradition of dreaming up tunnels, 2010 mayoral candidate Rocco Rossi promised that, if elected, he would build an underground road beneath Spadina Ave. from Allen Rd. to the downtown core.

The attention-grabbing idea harked back to the infamous Spadina Expressway of the early 1970s. That highway, which was nixed by the provincial government following a lengthy campaign by activists, would have continued today's Allen Rd. south to the intersection of Spadina and College.

In the end, Rossi finished a distant fourth behind Pantalone, George Smitherman, and Rob Ford, and the tunnel was forgotten.