The Canada Malting and Victory Mills silos are like two great concrete bookends on the downtown waterfront. Located at the bottoms of Bathurst and Parliament streets, the former soya and grain storage facilities are relics of a time when the port of Toronto was a place of heavy industry, not entertainment.

But while Lake Shore Blvd. and latterly Queens Quay E. have been the focus of extensive improvements since the 1980s, the silos have remained derelict.

The Canada Malting silos at Bathurst were built in 1928 as a place to store barley before being transformed into malt, which is used in beer and other products. Canada Malting Co. shut down in November 1987 and the City of Toronto has been looking for an "adaptive reuse" project to take over the designated heritage buildings since 1993. Ideas ranged from a hotel complex to a new storage facility for the Archives of Ontario to a giant mausoleum with space for 6,500 coffin crypts and 5,000 niches for urns. 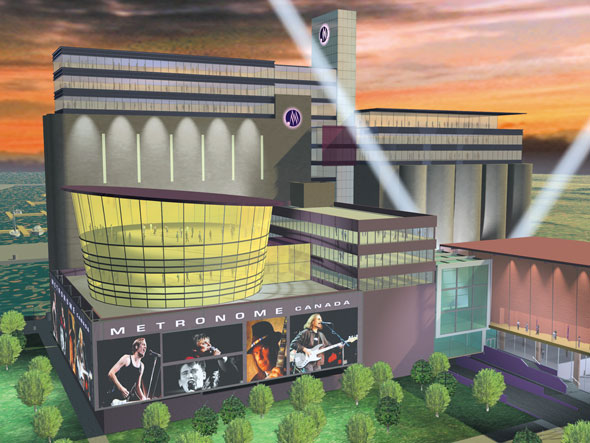 Several potentially viable plans have surfaced since then, most recently the 1996 Metronome plan that would have turned the concrete building and surrounding area into a music themed cultural centre, complete with an 800-seat auditorium, museum, retail, and restaurants.

According to Lynda Macdonald with community planning at the City of Toronto, that plan fell apart when the project's backers couldn't produce the necessary funding (the website is still up, if you feel like exploring a little.)

Macdonald says the city is developing a plan for the Bathurst Quay neighbourhood with a view to once again finding a purpose for the silos, among other things. Build Toronto, the city's real estate arm, is seeking expressions of interest that will play well with the nearby school and Ireland Park. "Creative ideas" for "quite extraordinary" buildings, she says. The process is due to wrap up next month. 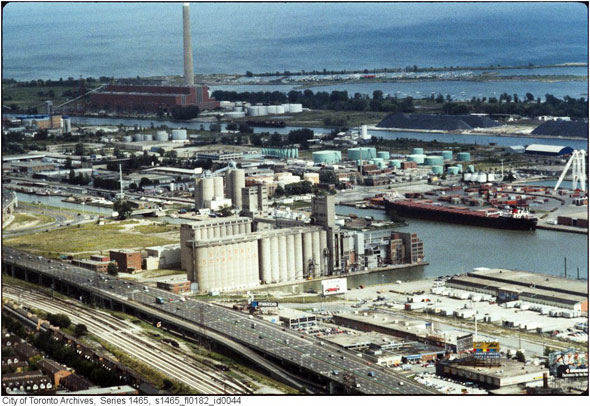 Things are happening at the Victory Mills site, albeit much more slowly. The privately owned, heritage listed silos, built between 1944 and 1948 as part of a larger complex by Sunsoy Products Limited, were the subject of a pair of development proposals in 2007. Two options were presented to the city: one that incorporated the silos, another that cleared them out the way.

City council decided both ideas were premature considering the ongoing plans to improve the Port Lands and Don River mouth, and the project went no further.

In 2011, the silos were selected as the future site of the Pan Am Games Award Pavilion. The winning design, created by students in Switzerland, envisioned covering the silo and surrounding lands with hundreds of illuminated PVC helium balloons, but it appears the idea has since been dropped.

Still the site refuses to stay quiet. Insurance company Manulife acquired the property earlier this year, according to the city. 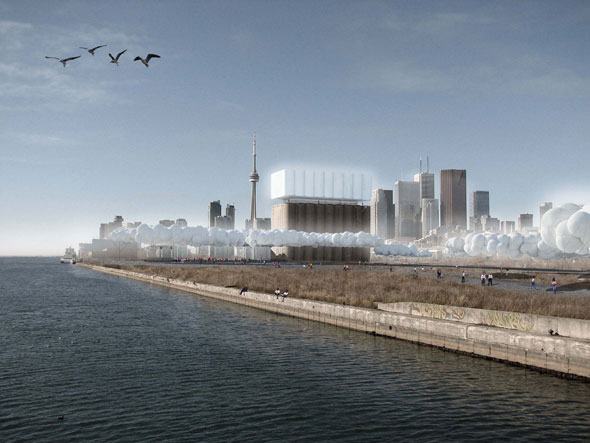