A brief history of the women's movement in Toronto

Sunday March 8 is International Women's Day, a global day of recognition and celebration of women. While many in Toronto celebrated with a massive march and rally yesterday, the rest of us might consider the role that women played decades ago in fighting for women's rights in this city.

Toronto has a long history of feminism and activism going back over a hundred years, and in celebration of International Women's Day, here is a look back at how this city was central to the women's movement in Canada, and how early feminists worked to improve the lives of Torontonians.

In the late nineteenth century, in the decades following Confederation, Canada, and Toronto, underwent many changes, including rapid industrialization, increased immigration and urbanization. The growth of cities resulted in more women living closer together, and allowed for women to easily meet and organize for social causes as well as for women's issues, especially suffrage, or the right to vote.

As the largest city in English Canada, Toronto was often the centre of reform efforts and suffrage movements. The prohibition of alcohol was an important part of this history. The Women's Christian Temperance Union was Canada's first national women's organization and it became a forum for middle-class women to become active participants in their own communities long before they were given the right to vote.

Toronto was home to the local union, but also home of the provincial and dominion offices of the WCTU. In 1895, the Toronto union set up it's office on Elm Street and later, Willard Hall was built at 20 Gerrard Street, opening in 1911. The building is now the home of Covenant House. The WCTU was concerned with the prohibition of alcohol, but all sorts of other issues that affected families, especially women and children.

They were also concerned with protecting the Sabbath, and were responsible for preventing streetcars from running on Sundays. They were also the first organization to demand equal political rights for women, but the vote was seen as a means to an end - so that they could improve society by legislating prohibition. In 1891, they the WCTU formally endorsed woman suffrage at all levels of government.

Their repeated petitions, delegations to provincial and federal governments, and demands for plebiscites kept the question of votes for women before the public. Historians now agree that their work was crucial in bringing Canadians to accept the notion of political rights for women.

The first organization formed explicitly to address women's lack of access to the political process was the falsely named Toronto Women's Literary Club, founded in 1876. Members met to discuss educational, social, political, and economic issues, but they generally believed that little could be done to advance women's status until the acquired the vote.

In 1883, the Literary Club was disbanded, and in its place the Canadian Women's Suffrage Association was formed to encourage public sentiment in favour of women's suffrage. They also formed a local branch, the Toronto Women's Suffrage Association, and both worked to endorse equal rights to vote for men and women, as at the time, the only people who could vote in federal elections were men.

The previous year, in 1882, a new law had given widows and single women over a certain age, if they had the right property qualifications, the right to vote on municipal by-laws, but not the full municipal franchise of the right to hold office. And of course, this only applied to white women. 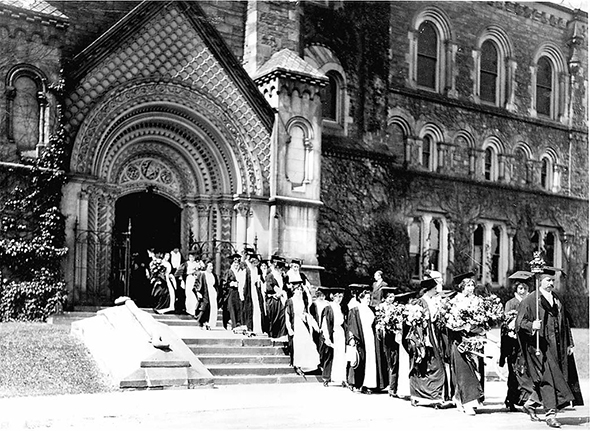 Women did make some small gains throughout the 1880s. They were finally admitted to the University of Toronto for the first time in 1884, and medical colleges for women were established in both Toronto and Kingston in 1883. The next year, the full municipal franchise was extended to unmarried women with the appropriate property qualifications, although they did not get the right to hold public office. Married women were excluded from this right (because it was assumed, problematically of course, that their husband would vote for them). 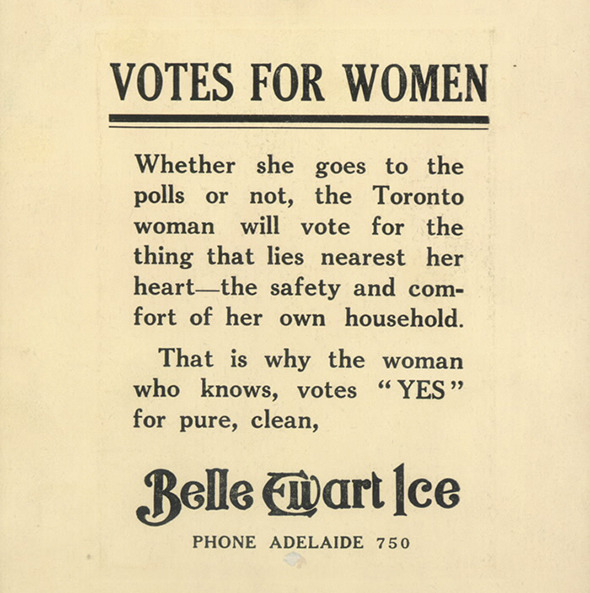 During this period, Toronto women were inspired by the efforts of American feminists. The Toronto-based Canadian Women's Suffrage Association invited the well-known American suffragist Dr. Anna Shaw to speak at a meeting held in Dr. Emily Stowe's home. Much enthusiasm was generated and this led to the creation of a new, more effective suffrage organization, the Dominion Women's Enfranchisement Association, with Stowe elected as the first president.

The Association immediately took action and organized a lecture series to educate and arouse public sympathy for its causes. They also brought in Susan B. Anthony to speak. They held their first convention in 1890 in Toronto. Their aspirations, however, remained elusive. Like other suffrage organizations, it was Toronto-based, directed and dominated by local members, and never fully succeeded in the difficult task of organizing a nationwide rights group.

One of the most important organizations in the history of the women's movement in Canada was the National Council of Women, established in 1893. Two thousand women attended their first meeting was held in the Horticultural Pavilion in the old Allan Gardens in Toronto, before it was destroyed by fire in 1902.

Their objective was to encourage and support the extension of women's domestic roles into wider Canadian society. They formed Local Councils across the country, and affiliated numerous other societies. Toronto's Local Council of Women met in the fall of 1893, with over 200 women who represented 49 different organizations in the city.

Over time, they created a bureau at City Hall for the unemployed to register in order to get work, and they visited the city jail, interviewing the Police Matron on treatment of female prisoners. They also investigated the working conditions of girls working in factories, and concluded that conditions needed improvement.

They pushed for the hiring of a female factory inspector by the province, which they got, and an amendment was passed in city council to always provide for one. With Mary Agnes Fitzgibbon as their president in the early 1900s, they established the Women's Welcome Hostel for immigrant women, located at 52 St. Alban's Street.

The suffrage movement continued to grow in the first decade of the twentieth century. In 1907, the Dominion Women's Enfranchisement Association changed its name to the Canadian Suffrage Association. Two years later, they collaborated with the WCTU and staged a massive demonstration at the Ontario legislature. A vigorous new group of progressive and professional members were attracted to the cause, along with members of the Toronto Local Council of Women.

The second decade of the twentieth century proved to be fruitful for the Toronto Local Council of Women, and their affiliates. By way of example, legally, milk had to be pasteurized, inexperienced mothers were advised on how to feed and care for their children, widows and deserted wives received the Mothers' Allowances, public school pupils received better medical care, and could get free eye-glasses. Free dental clinics existed for children, and the city's water system was purified. 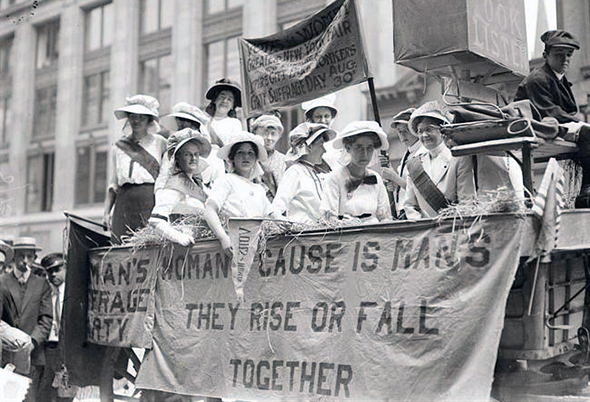 With the outbreak of the First World War, Canadian women had organized around a large number of social, political, cultural, and economic issues. They were spurred by economic need and patriotic fervour to enter the paid workforce, filling jobs vacated by enlisted men.

During the war, some suffragists persisted in their campaigns, but they also established Suffragists' War Auxiliaries which became involved in local recruitment drives and organized women to fill available jobs vacated by male service volunteers. Some suffrage activists planned future suffrage campaigns while they assembled soldiers comforts and bandages for the Red Cross.

The Toronto Council of Women also continued to maintain an active interest in civic and community affairs, while also contributing to the voluntary war efforts. Several victories for women did come out of the First World War. Women had continued to campaign for the vote, and the turning point in the battle came in 1916 when women in Manitoba, Saskatchewan, and Alberta won the provincial franchise.

Ontario and British Columbia followed suit in 1917. Ontario women, however, did not achieve the right to hold public office until 1919. At the federal level, women's franchise was achieved in three stages. First, the Military Voters Act in 1917 gave the right to vote to women nurses serving in the war.

Later that year, the Wartime Elections Act extended the franchise to women who were wives, widows, mothers, sisters and daughters of those alive or deceased, who had served or were serving in the Canadian or British military or navy.

In 1918, the passage of the federal Women's Franchise Act gave the right to vote to every woman who was over the age of twenty-one and a British subject, and who possessed the same qualifications as men required for the provincial franchise.

British Canadian women achieved the vote before women in Great Britain, and (as far as the federal franchise goes) before women in the United States. The following year, the federal government enacted legislation enabling women to be elected to the House of Commons.

Toronto continued to be a centre of action during the second wave of feminism in Canada, and today, the city remains an important hub of feminist activity. While women in this city have worked for women's rights for decades, there is much work to be done. 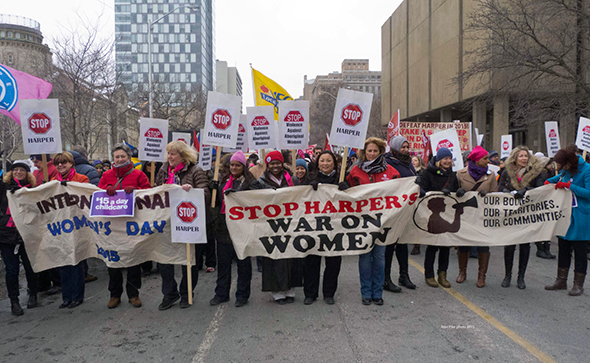 If you're looking for a way to celebrate International Women's Day with a focus on Toronto, take a look at Pat Staton's excellent book Toronto Women: A Walk Through History. Published in 2012 by Green Dragon Press, the small book features eight different walks through neighbourhoods like Yorkville, the Annex, and Kensington Market.

Each walk features a map with 10-14 stops each, and information about such locations as homes of well-known and lesser known women who made their mark in Canadian history, architecturally important buildings, homes, monuments, and parks. With the temperature finally breaking the freezing point, after brunch, learn more about the history of women in this city!

One thing to note in conclusion: this article is a look at the history of first wave feminism. It was a very Anglo-Canadian movement, with white women founding and running these organizations. They were not concerned with the rights of non-white women, and scholars of the movement have noted this in several studies. Stay turned for a post next week on the history of the second wave in Toronto, wherein Indigenous women and women of colour make their mark on the activist history of this city.

Alison Norman is a historian who lives in Toronto. She teaches in Canadian and Indigenous Studies at Trent University.

Photos from Queen's University, the Toronto Archives, and Alan Pike