Yonge and Bloor could be about to become even more densely clustered with high-rise residential towers now that a 61 storey building is on the cards at Yonge and Cumberland streets.

Hot on the heels of Sam Mizrahi and Foster Partners' plan for what could become the tallest building in the country, a developer is proposing a mixed-use building opposite the Toronto Reference Library that would include 531 residential units and a large, two-storey retail space on Yonge St. 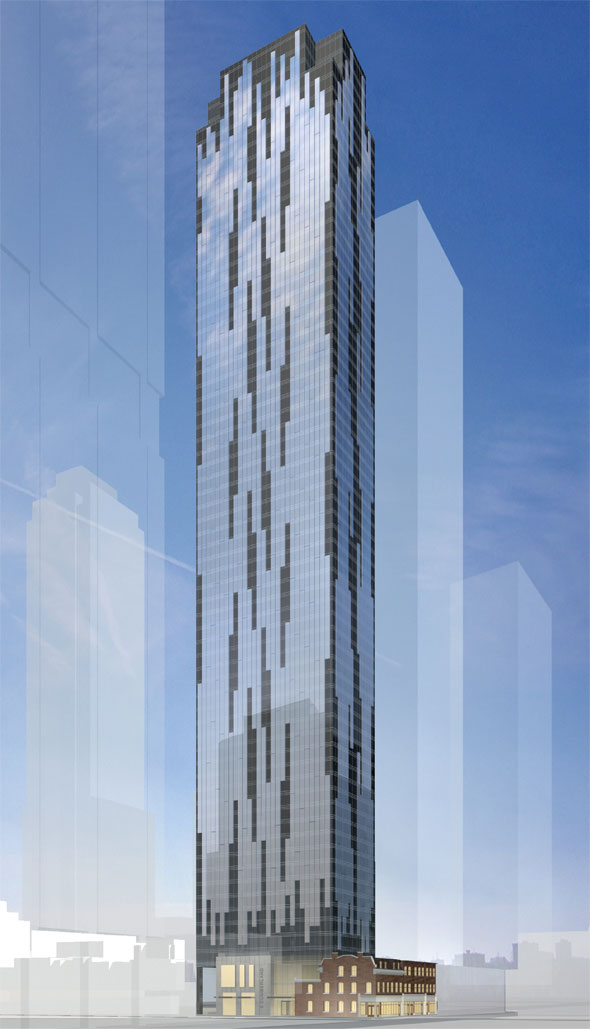 "8 Cumberland" by Phantom Developments, a company behind the proposed Jade Waterfront building on Lake Shore Blvd. W., would require the demolition of several stores on Cumberland St., including Thomas Hinds Tobacconist. The retail portion of the tower would be created by knocking together several stores on Yonge St. built between 1867 and 1874, resulting in a single retail space suitable for a major retailer.

(Say goodbye to the Pizza Pizza, Quiznos Sub, Big Smoke Burger, and other restaurants on that strip.) 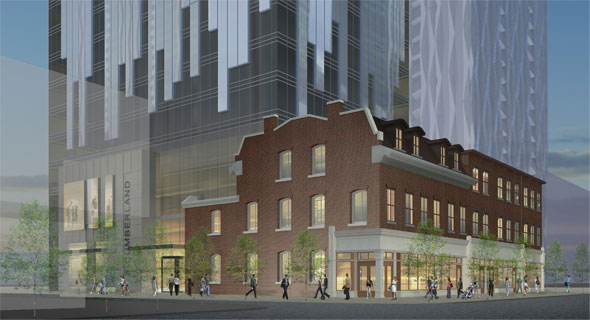 Phantom estimates the tower will top out at 193.55 metres, a little below the roof of the nearby Four Seasons Hotel, and contain 413 one-bedroom and 118 two-bedroom units. The developer is asking the city to alter the zoning by-law for the site, which currently limits the height of buildings on the block to a maximum of 18 metres.

The blueprint was produced by Page + Steele IBI Group Architects, the designers of the downtown Delta hotel tower and Yorkville's Prince Arthur Complex, and proposes heavy use of glass and stone cladding. Judging from renderings, the exterior will be distinguished by dark vertical lines that look like falling Tetris pieces.

The re-zoning application is currently under review and must be approved by city council before any work can go ahead. 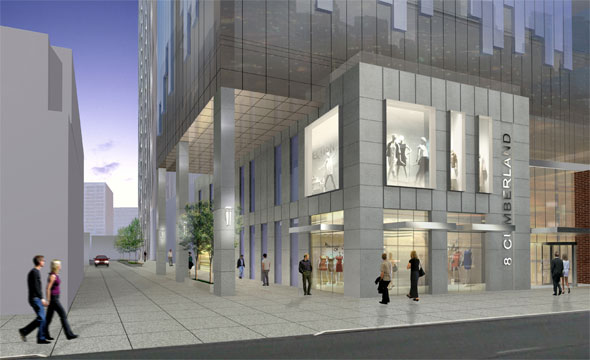 Name: 8 Cumberland
Height: 61 floors (193.55 metres)
Units: 531 (413 one-bedroom, 118 two-bedroom.)
Retail/non-residential space: 1,414 square metres
What's hot: Setting the tower back 10 metres from Yonge St. will give the historic stores a little breathing room, though it should be back further (20 metres,) according to the planning guidelines.
What's not: That cladding.

What do you think of the proposal?