10 key Toronto intersections as they were 50 years ago

50 years is a long time in the life of a city. For Toronto, the decades since 1965 (ish) have delivered immeasurable change: the development of the suburbs turned farmland into tracts of housing, the transit entered one of the biggest periods of expansion it is history, and downtown saw the first of many modernist skyscrapers appear at key intersections.

In many of these photos, the changes are astonishing (it took me several minutes to identify a point of reference, the Crown Life building, in the picture of Yonge and Bloor below.) Dundas and Spadina, now the heart of Chinatown, shows now sign of Asian influence. Instead, a Jewish deli and a raunchy burlesque theatre mark the intersection.

This is what 10 major Toronto intersections looked like 50 years ago.

Yonge & St. Clair (top photo)
Yonge and St. Clair looking towards the subway station loop. Like many of the intersections in this series, intensification has heavily altered the view. The buildings at the north and southeast corners have been replaced by new structures: The St. Clair Centre and One St. Clair East. When this photo was taken, streetcars could continue east along St. Clair and up Mt. Pleasant Rd. to Eglinton. 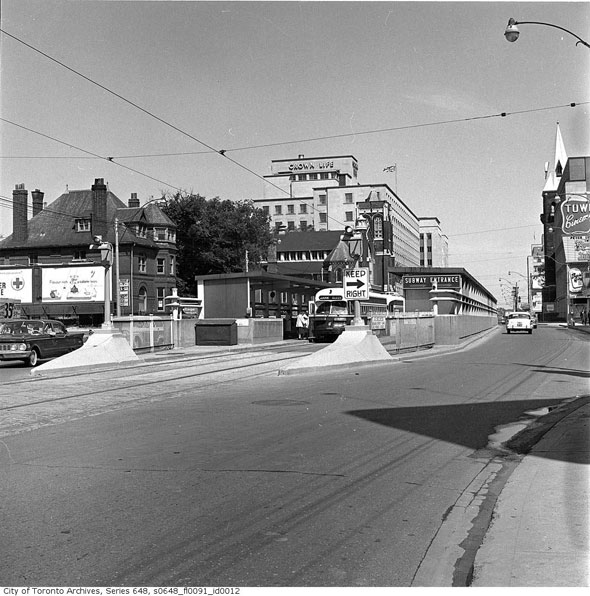 Yonge and Bloor looking east before the completion of the Bloor-Danforth subway line and the heavy intensification that followed. When this photo was taken, Bloor-Danforth streetcars connected with the Yonge line via a pair of bays in the middle of the street. Steps on each side led down to the ticket hall and platform area. The Crown Life building is one of the few structures that remain. 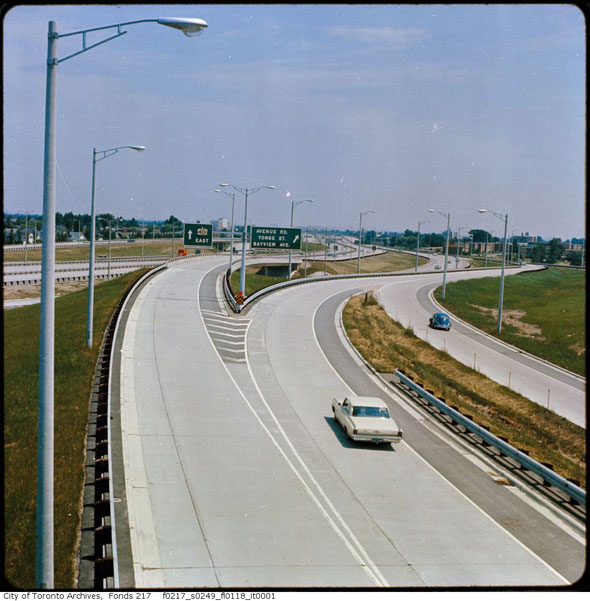 The 401 and Allen Rd. interchange in 1967. Construction of the "Toronto Bypass" began in 1946 and the road opened in phases starting around a decade later. "Provincial highway bypasses may end to traffic tie-ups," the Globe and Mail wrote in 1952. The site today has been heavily altered. 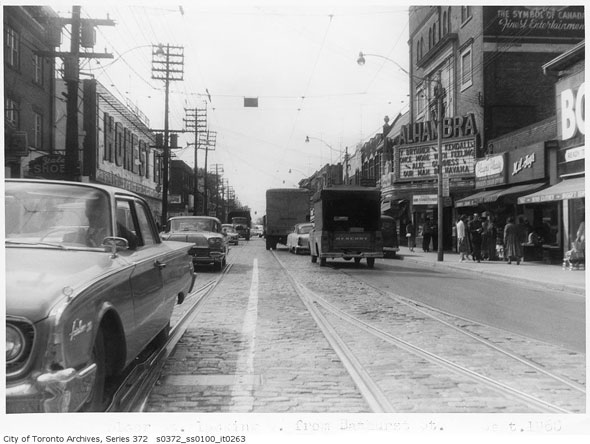 Bloor and Bathurst in 1960 looking west towards the Alhambra theatre and Honest Ed's before the discount store took over the remainder of the buildings at the corner of Bathurst. Our Man in Havana starring Alec Guinness and Once More, with Feeling! are playing at the now-demolished theatre. 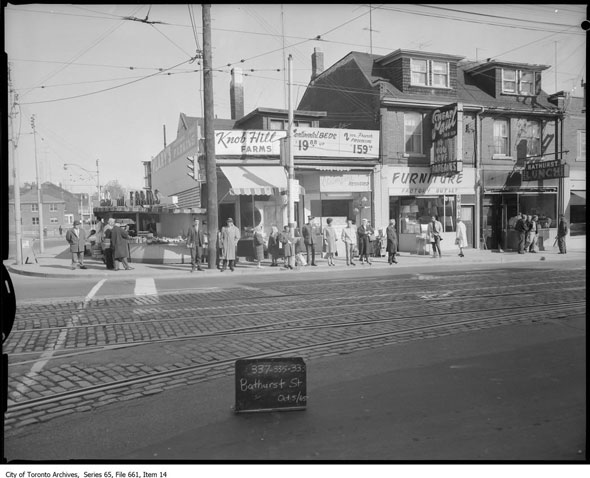 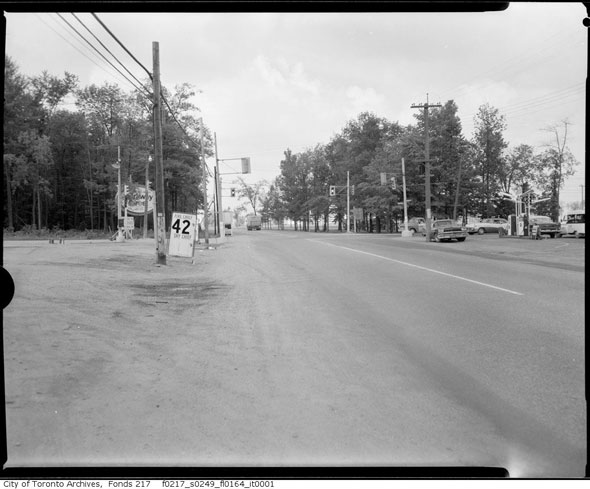 Sheppard and Woodbine in 1965, prior to the construction of the Don Valley Parkway. Today, this location is part of the Sheppard and Highway 404 interchange. 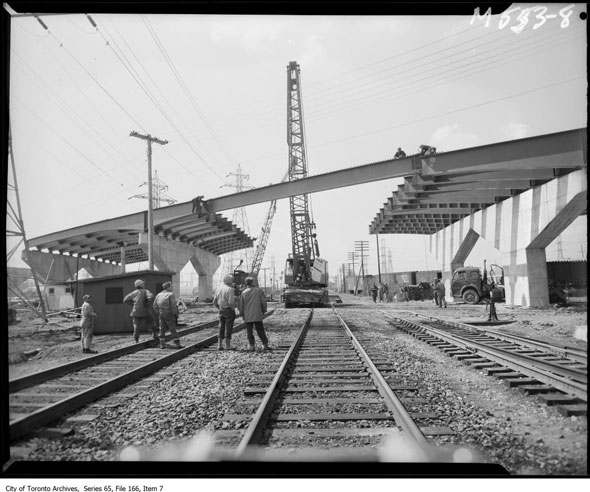 Construction of the Six Points Interchange at Bloor, Dundas, and Kipling in 1961. This photo is taken from the rail tracks south of the main intersection, looking west. Revitalization work in the Six Points area that will see the tangle of over and underpasses heavily altered began in October 2014. 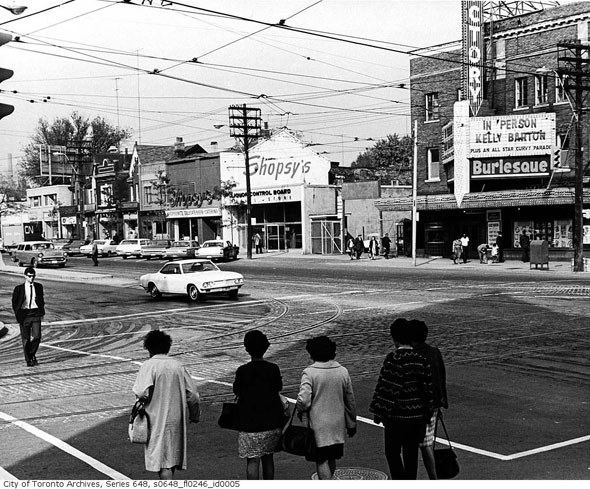 Spadina and Dundas looking northeast in 1968. The Victory Burlesque, located in the former home of the Standard cinema, is advertising Kelly Barton "plus an all star curvy parade." Shopsy's deli and an old LCBO are visible just up the street. The view today is much different: the streetcar has its own right of way and the bawdy old Victory is an RBC branch. 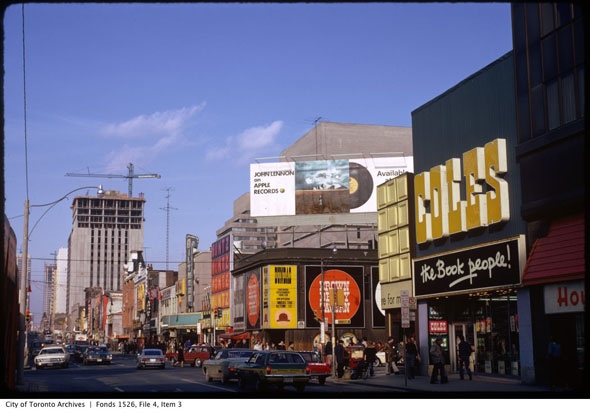 Yonge and Dundas before the square circa 1973. John Lennon's Mind Games album is being advertised atop the Brown Derby Tavern, a popular music venue that closed and was demolished shortly after this photo was taken. All of the buildings on the right side of the image were cleared to create Yonge Dundas Square in 1998. Today, the view is somehow more intense than it was 42 years ago. 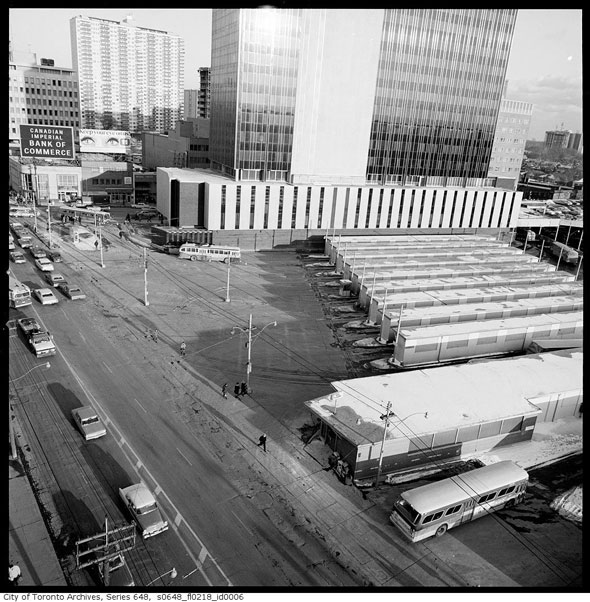 Yonge and Eglinton in the heyday of the bus bays in 1967. The once bustling surface connection area is now boarded up in anticipation development after the completion of the Eglinton-Crosstown LRT. When the Yonge line opened in 1954 this was its northern terminus.