Wrigley to leave Toronto with plenty of memories

Wrigley chewing gum might be most commonly associated with America (in particular Chicago--think Wrigley Field), but the company has deep roots in Toronto. This city was the first place its founder William Wrigley Jr. opened a factory outside the U.S., and for the last 108 years, this city has been producing several of the company's most recognizable brands.

That will all come to an end in a year from now when the company closes its Toronto plant. Given the longstanding relationship, here's a look at the local history of Wrigley's, one of the city's surprising manufacturing players for over a century.

William Wrigley Jr. was born in Philadelphia in 1861. A natural if initially wayward salesman, he ran away at age 11 and briefly sold newspapers in New York City before returning home and being expelled from school for pulling pranks. As a teenager he worked as a travelling salesman for his father's soap company. 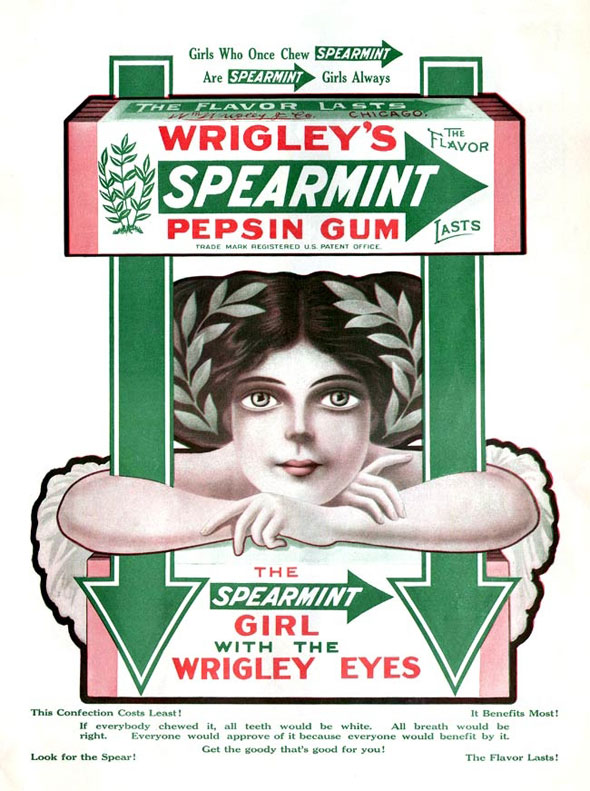 The William Wrigley Jr. Company was founded in Chicago in 1891 a few years after an unsuccessful attempt at selling rubber stamps. At first Wrigley sold soap and baking soda, offering incentive gifts to customers who bought in bulk.

As Daniel J. Robinson wrote in his essay Marketing Gum, Making Meanings: Wrigley in North America, 1890-1930, giving away free prizes occasionally backfired. "A batch of umbrellas oozed red dye when exposed to rain [and] a silver-plated cologne bottle tarnished quickly and confused consumers, with some mistaking it for a handle-less syrup jug." Giving away free packs of chewing gum proved to be much more successful. 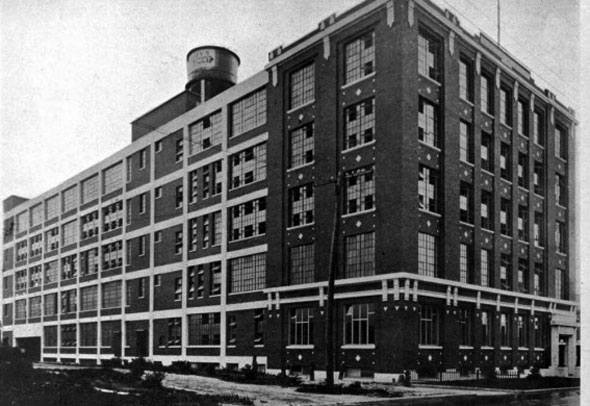 In 1907, Wrigley made his first foray outside the U.S., opening a small factory at 7 Scott St. in Toronto--now the site of the St. Lawrence Centre for the Arts--with $50,000 of his own money. The 5-storey building was in the heart of the city's manufacturing district, but the location was only temporary. By 1917, the company was operating out of a purpose built 11,892 square metre plant on Carlaw Ave., between Dundas and Queen.

The products made in Toronto for the Canadian market during the 1910s included Doublemint, Spearmint, and Juicy Fruit. As he had when he was selling soap and baking soda, Wrigley offered wholesale customers a dizzying array of free gifts, including a 16-inch talking doll, watches, electric irons, Kodak cameras, even filing cabinets and oak tables. The more gum they bought, the better the gifts. 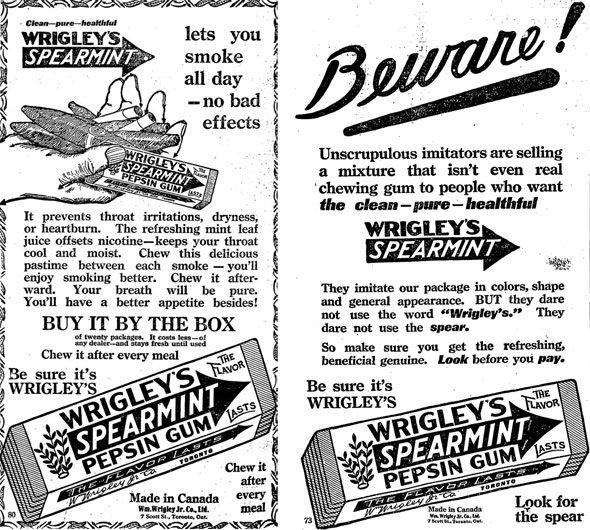 The company was also a prolific advertiser on both sides of the board. Most ads printed in the Toronto papers centred on gum's purported health benefits. Chewers could expect more energy, better digestion, even reduced thirst. "Wrigley's Spearmint lets you smoke all day - no bad effects," said one print ad that ran in the Toronto Star. 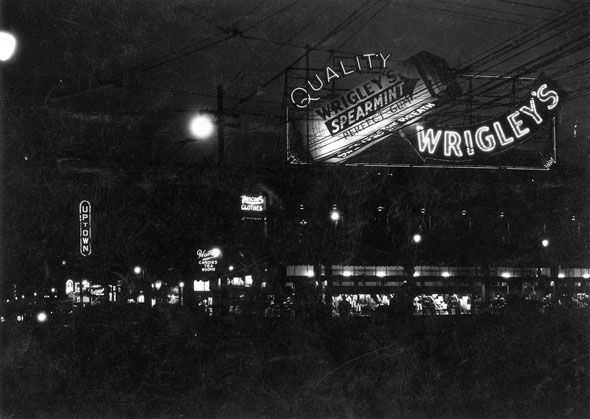 Wrigley Jr. was also an early adopter of electronic billboard advertising. Times Square in New York glowed from the light of a massive 1,337.8 square metre neon sign, and 117 contiguous billboards lined the tracks of the rail line between Atlantic City and Trenton, New Jersey, making one giant, multi-state ad.

In addition, Wrigley bought a stake in the Chicago Cubs (later claiming the naming rights to their ball park) and the entire Californian island of Catalina, which he developed into a resort, in 1919. Daniel J. Robinson writes that the company signed a multi-year contract in 1922 for billboard, poster, subway, and street car advertising that was among the most valuable in the world at the time.

In the 1930s, a giant neon Spearmint sign was located on the roof of the Stollery's building at Yonge and Bloor and there were ads across the TTC. "Spearman," a sort of half-man, half-arrow creature, became the company mascot, appearing in countless promotional situations--even a version of the Mother Goose fairy tales that was handed out in schools in Toronto. 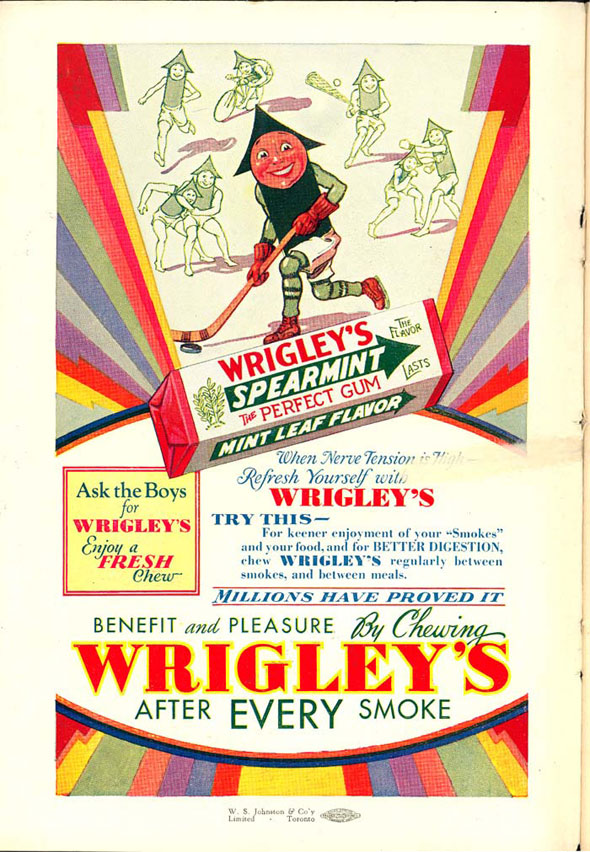 Wrigley moved from its Carlaw Ave. plant in 1963, eventually landing on Leslie St. north of Eglinton Ave. The old building was converted into lofts in 1998.

Wrigley Jr. died in 1932 and the company was passed to his son, Philip K. Wrigley.

When the Leslie St. plant closes next year, it will be the first time in more than a century that Wrigley chewing gum has been absent from the city. And that's a real shame. 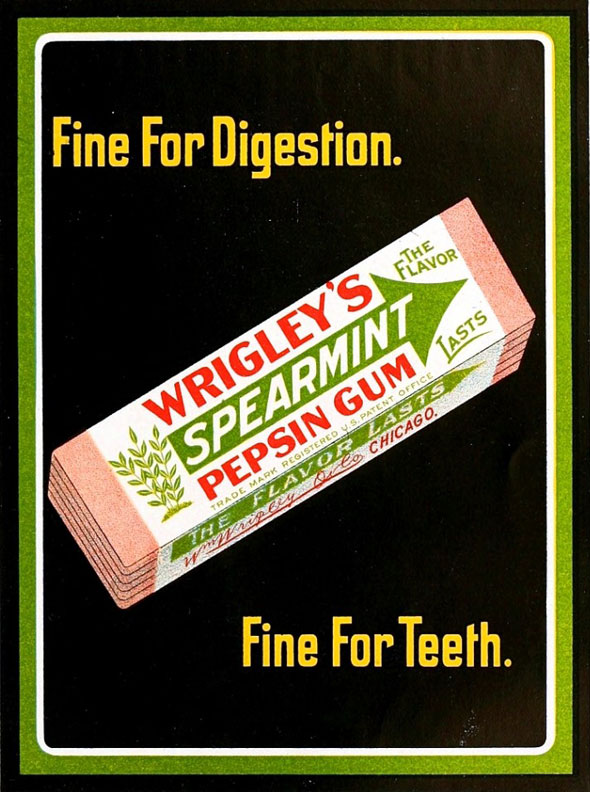 "Fine for digestion, fine for teeth." A U.S. poster for Spearmint. 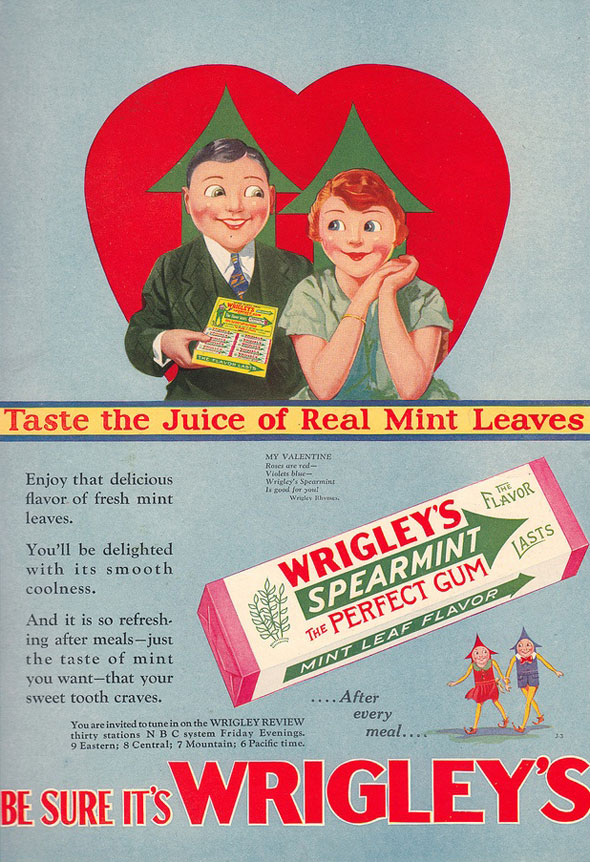 Don't forget to tune into the Wrigley Review on NBC nationwide. 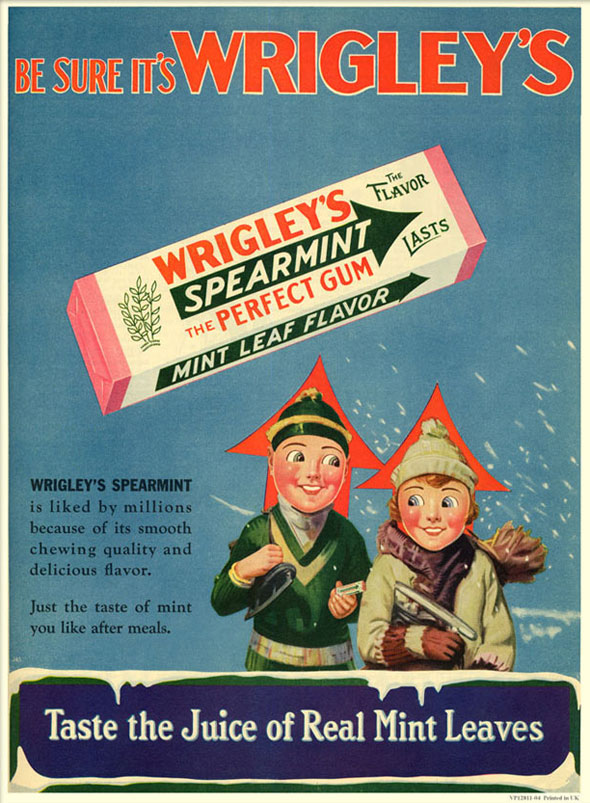 The packaging for Spearmint, Doublemint, and Juicy Fruit have remained relatively unchanged for more than a century.

The sugar-coated P.K. gum appears not to have survived to the modern day.