The past and the future of the Inn on the Park

As the last remains of the tower portion of the Inn on the Park succumbs to demolition efforts, Tridel has released preliminary renderings of the development that's set to replace what was once Toronto's premier suburban hotel destination. The initial design work was completed by Peter Dickinson before his death in 1961, which resulted in resort complex that leaned heavily on the triangular forms popularized by Frank Lloyd Wright in the previous decades.

For decades, the Inn on the Park was a beacon of luxury that rose up above the Don Valley at Eglinton and Leslie. Opened in 1963, the company added a 23-storey tower in 1971 bringing the total number of rooms on offer to over 500. Not your average hotel, the Inn on the Park boasted innovations like a nightclub, fitness centre, and massive convention centre long before such things were commonplace. 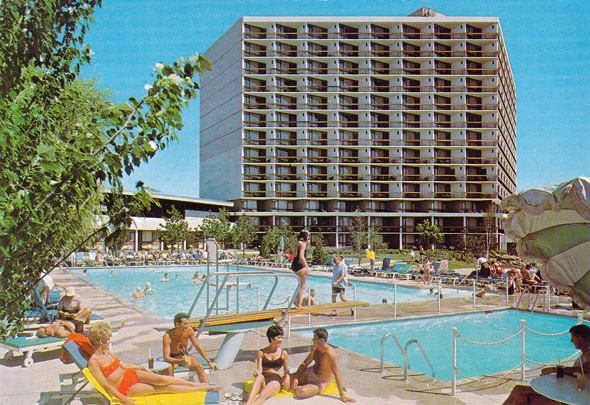 Things would go downhill in the 80s. A fire at the outset of the decade brought heaps of bad publicity and the once luxurious atmosphere had lost its lustre. The very idea of vacationing in the city become passĂŠ (something which also led to the ultimate demise of the Lake Shore motel strip). By the mid 1990s, the Inn on the Park was subsumed by the Holiday Inn chain. A decade later it was closed down, a shell of its former self.

The original hotel was demolished in 2006, leaving only a slight trace of the former grounds. Wrecking crews have now almost finished with the tower from 1971, though a drive up Leslie St. still reveals its ghostly remains -- for now. This was an iconic Toronto institution in its heyday, something that would be hard to grasp for those passing by today. 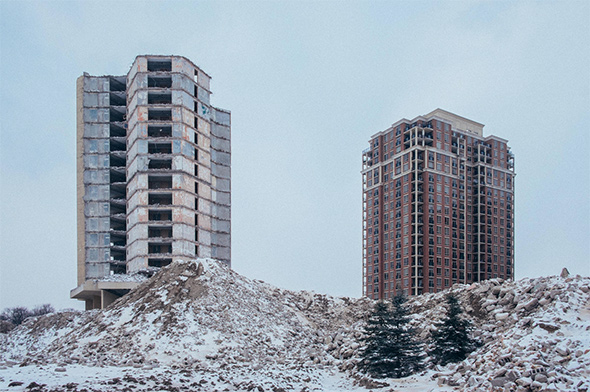 But after a series of plans fell through, it would appear that the future of the site is now coming into focus. In place of previous visions that included seniors' condos and car dealerships, Tridel has released preliminary plans for a series of condo towers that will take the name On the Park in an homage to the previous occupant of the land. 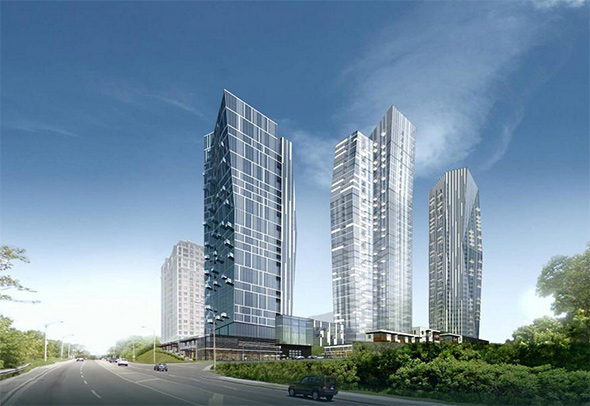 According to Urban Toronto, the new buildings will range "between 28 and 39 storeys [and contain] 1,380 residential units [alongside] 20 three-storey townhouses and 943 square metres of commercial retail space." The Crosstown LRT is about to stop at the doorstep of these buildings, so the rise of condos here was pretty much inevitable.

The designs for the new buildings lack the modernist flare of the Inn on the Park, but do feature a mixture of polygonal footprints, which ever so subtly gesture to the old Dickinson design. It really would have been nice to see some heritage preservation here, but those of us who remember the old hotel will still be able to imagine it perched atop the hill.