That time when the Toronto Toros took on the Leafs

Even by Leafs standards, the 2014-2015 season has been a disaster. Since firing coach Randy Carlyle on Jan. 6, the team have won just a single lousy game over the Columbus Blue Jackets. Their embarrassing free fall towards the bottom of the league, during which they have been shutout multiple times, is a disgrace and now it appears some fans are starting to lose interest.

In 1973, Leafs management were sweating for different reason. For the first time in a generation, a potentially viable challenger to the team's number one status in Toronto had emerged in the form of the World Hockey Association franchise, the Toronto Toros.

The WHA was established in 1972 explicitly to challenge the National Hockey League's status as the dominant professional hockey competition in North America. By placing teams in smaller Canadian and large U.S. cities, the league hoped their Avco World Trophy would rival the Stanley Cup for drama and spectacle.

Initially based in Ottawa, Toronto's team was bought and moved south after only one season in the capital by John F. Bassett, the leader of a consortium of sports and businessmen named Can Sports, for somewhere in the region of $2 million.

Leafs owner Bill Ballard, who also bid for the franchise, offered the team use of Maple Leaf Gardens, but Bassett initially balked at the idea. "I'd rather play somewhere else, even with less seats, where we could establish ourselves. When people think of the Gardens they think of the Leafs," he told the Globe and Mail. (Avoiding the Gardens and Ballard was a shrewd decision, as we'll soon find out.) 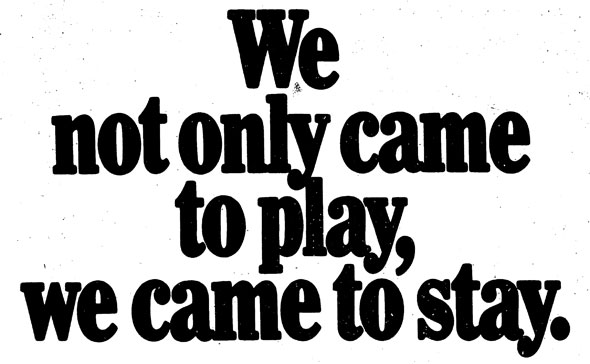 Renamed the "Toronto Toros" from a list of 80 possible names that (apparently) included "Twinkies" and "Twee-dies," the team signed a deal to play at Varsity Stadium on Sunday evenings, though Bassett publicly expressed an interest in building a stadium at the Exhibition Grounds, King and John, or one of several locations in the suburbs.

The home jerseys would be mostly white with red and blue flourishes. The logo, as the team name suggested, was a charging bull, angrily snorting steam.

Before taking the ice, the Toros tried to lure out-of-contract Leafs star Darryl Sittler and disgruntled Canadiens goalie Ken Dryden into signing, but Sittler eventually opted to return to his old team for less money than Bassett was promising. Dryden, upset at a lowball contract offer from the Habs, decided to work for Toronto law firm Osler, Hoskin and Harcourt instead.

The Toros did manage to secure the services of four-time all-star and Stanley Cup champion defenseman Carl Brewer, however. 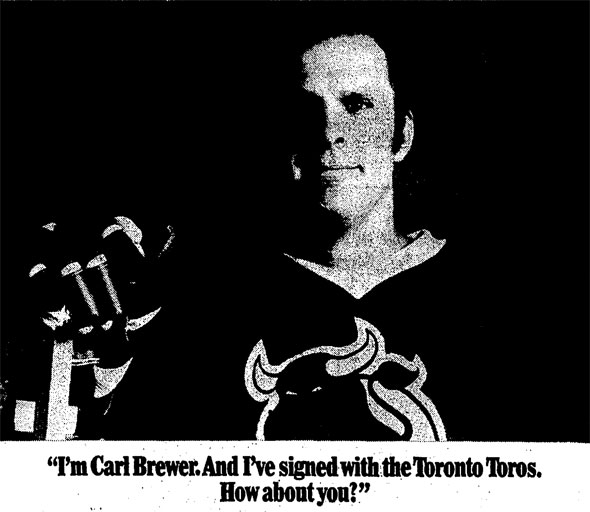 The first season got off to a difficult start. The team tied its home opener against the Chicago Cougars 4-4 and its second game 3-3 against the New York Golden Blades before losing to the Quebec Nordiques and Minnesota Fighting Saints. Their first win came on the road against the Los Angeles Sharks, 3-0, thanks to the heroics of goalies Les Binkley and Gilles Gratton.

(Gratton would prove to be something of an eccentric presence on the team. From the New York Times: "He told people he was reincarnated and had once been a soldier in the Spanish Inquisition. He refused to play when the moon was in the wrong part of the sky.")

Despite further early season losses to the Winnipeg Jets and New England Whalers, the Toros rallied and finished second in the WHA's Eastern Conference with a record of 41-33-4. Moving to Maple Leaf Gardens for the playoffs, the team ended up playing longer into the Spring than their hosts, eventually being eliminated by the Cleveland Crusaders. 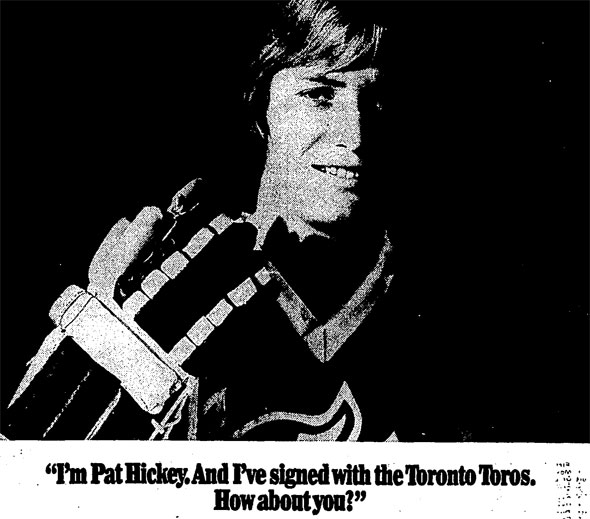 The Toros added former Leaf favourites Frank Mahovlich and Paul Henderson in their second season, which was played under seriously disagreeable terms at Maple Leaf Gardens. Leafs owner Ballard was comically hellbent on killing the Toros. By charging exorbitant rent, forcing the Toros to build their own dressing room and box office, and even deliberately dimming the house lights and removing cushions from the seats, he created an expensive, spirit-crushing atmosphere for the young team. In interviews, Ballard would often derisively refer to the Toros as the Toronto "Lawn Mowers."

The finances of the WHA were looking increasingly shaky, too. The team made the playoffs again, but lost in the first round to the San Diego Mariners.

The 1975-76 would prove to be the undoing of the young franchise. The loss of key players to the NHL, tanking attendance, and bad results, including an embarrassing blown 8-2 lead against the Cleveland Crusaders, prompted Bassett to move the team to Birmingham, Alabama for the 1976-77 season. The team remained in the Deep South until they were eliminated entirely by the merger of the WHA and NHL in 1979.

The only team to find real success in the now-defunct league was the Winnipeg Jets. The team won a record three league titles and were the only ones not to fold, move, or change names.