The historic limestone facade of Union Station has been restored to its natural glory thanks to some impressively thorough cleaning work carried out by the City of Toronto over the last year.

Shortly after Christmas, the scaffolding and plastic protective covering that had wrapped the Front St. side of the 87-year-old railway station for more than a year was removed, revealing brickwork free of stains and tarnishes for the first time since renovations began in 2009. 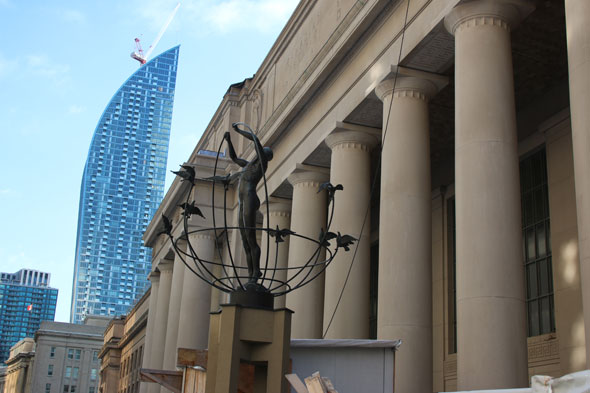 According to the city, the building's exterior is a mix of Indiana and Queenston limestone. The latter was quarried from the Niagara Escarpment and used in the construction of other historic Toronto structures, including the Gibraltar Point Lighthouse, the Royal Ontario Museum, and parts of the Ontario Legislative Building at Queen's Park.

The 22 famous 12-metre columns that guard the entrance to the ticket hall are made from Bedford limestone and weigh 75 tons each. In the 1970s, years of exhaust fumes, city grime, and other airborne pollutants caused extensive cosmetic damage to the columns and much of the ornate facade, as evidenced by the grim photo below. 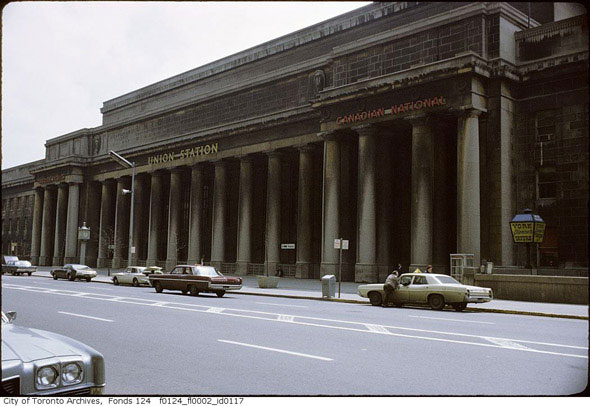 Although the removal of the protective wrapping suggests work is coming to a close, the city doesn't expect the $795 million revitalization, which includes a new train shed roof, the addition of a basement retail level, and two new GO Transit concourses, to be finished until late 2015 or in to 2016.

The separate TTC construction project taking place beneath Front St. is also still ongoing, though spokesperson Jessica Martin says construction is due to be completed on schedule and on budget before the start of the Pan Am Games this summer. Until then, however, subway riders should expect weekend closures.

This Saturday and Sunday, Line 1 will be closed between Union and St Andrew stations while crews excavate a shaft for a new escalator. Four more weekend closures are planned for January and February in order to complete work on the University line platform, which will eventually include a new art wall between the two tracks and a new elevator.

When work by the TTC finally wraps, riders will be able to enjoy an expanded ticket hall and new Yonge line platform without having to navigate temporary stairs and plywood panelling.