What it's like to spend Christmas in palliative care

Christmas trees, glittery lights and mistletoe have dotted Toronto's urban landscape in preparation for one of the most festive seasons of the year. As a photographer, living and working downtown, it is inevitable to step outside and capture the essence of this season.

This year, however, I wanted to pursue a different story, documenting how Christmas is celebrated in palliative care. Palliative care isn't associated with happy endings. Generally, people tend to think of palliative as a gloomy place, a place rife with death and finality.

I found the exact opposite while visiting a family friend there, who happened to have taught me back in Pakistan, in Grade 1. I met a few volunteers who informed me that within a few days, they would be decorating the entire unit for Christmas. I was confused. The patients usually cannot get out of their beds and would barely get to see the halls and the common areas. That's when one of the volunteers smiled and said: "It's for the families that are practically living here with their loved ones, preparing to depart from our world." 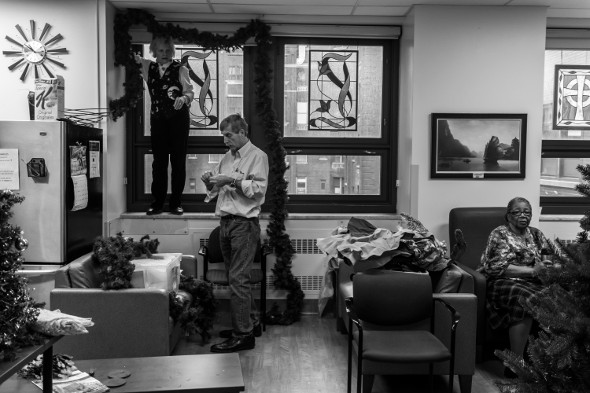 Numerous volunteers came out to take part in decorating the floor. I caught up with Bill Wade, a retired nurse who has filled the volunteer role in the unit for over seven years: "I love how this place gets transformed during Christmas time. When it gets dark in the afternoon and we turn on all these big, beautiful lights, this place is magical. People come from all over the hospital to see it."

A few steps away, Pat Butler, another volunteer, was focused on decorating a large Christmas tree. "I was here 8 years ago when my mother was in palliative over one Christmas. She was here for four months and was very well taken care of as was the rest of the family." She added that her father-in-law, Kenneth Butler, was the founder of the unit. "I will always be happy to come down and help ... because this place is close to my heart."

Up until that moment I was under the impression that palliative care was only about managing dying patients. I realized that this was equally about the grieving families that inhabited the space. "I would say the people that need the most help are the families," another volunteer said. "They get angry and go into denial. We are not here to fix anything. That is not our job. We are just here to sit and listen and that is really hard. You don't want them to think you're not hearing them.

"I attended a lecture one evening by a woman who was a chaplain and someone in the audience said, what if someone doesn't believe in God before dying? She said, you must be silent. You are not here to teach." 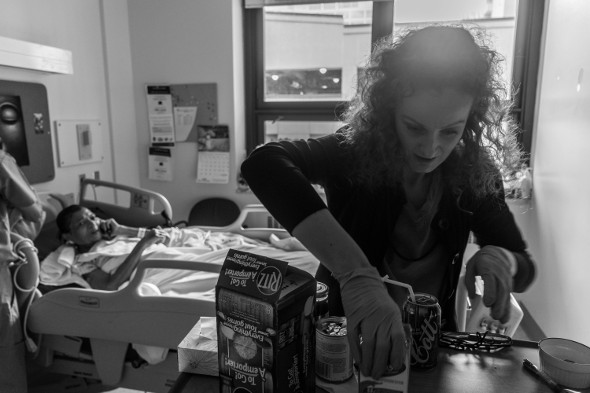 As I followed the volunteers through the hallways, kitchens, patient's bedrooms and common areas, I also began to encompass the nurses and doctors into the series. Being an immigrant I began to see Canadian healthcare for what it really is: a dignified life and death for all human beings no matter where they come from.

Dr. Ignazio La Delfa, the medical director of the palliative care unit, explained that the unit provides end-of-life care for patients with life-threatening illnesses (cancer or non-cancer patients, though they are seeing a large growth in the number of non-cancer patients). Anywhere between 220 and 240 people die in the unit per year.

"We also have a large bereavement program that follows patient's families for up to a year after the death," he said. "Following up with family members is important. Finding out how they're feeling, or if there's anything we can further help them out with. If you die anywhere else in this hospital you don't get that." 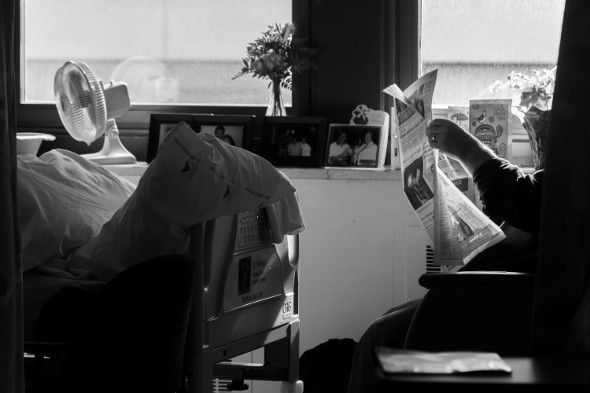 As the day came to an end, I met Nerissa, who lost her father in palliative last year and had returned again this year, with her mother in palliative care. Though this is a tragic situation, I realized after speaking with her, how monumental of a role the unit has played in her healing and acceptance of her parents passing from this world.

"As a family member that has been through having my dad here, and my mom here, I feel like this is my home away from home. This is where both my parents have felt comfortable. They felt at peace. These were their last happy days. ... The volunteers, the doctors and the nurses have done everything to make my mother comfortable. The staff recognizes my mom because they took care of my dad last year. It was so nice to have the doctors come up to her and say "hey, we took care of your husband last year."

Looking around this quiet room, I noticed different philosophies, religions and schools of thought coming together. "People think this is a gloomy, sad place," Nerissa said. "As someone who lost her dad last year here and is now going to lose her mom, there is no place else I would rather be."

Writing and photos by Mariam Magsi.