The TTC wants you to know about its airport bus

As the Union-Pearson Express continues to make headlines for its costly fare(s), the TTC has revealed that it's taking steps to raise the profile of the 192 Airport Rocket. The bus, which runs from Kipling Station to Pearson International, has never been advertised heavily, even as it provides the cheapest way to get the airport and is now fitted with luggage racks.

According to the Star, the current ridership of the bus is 4,500 daily. With a desire to double that number, the TTC will wrap the vehicles with travel-themed graphics and add the service to the official route map that appears on subway vehicles. 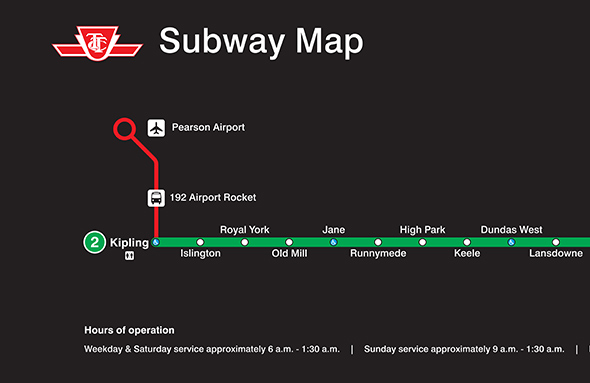 While the service is obviously slower than a taxi or the UPX (unless you happen to live near Kipling Station), the three-stop express service is actually pretty good, and it makes sense to highlight its existence to transit users who may not have even considered it given the attention focused on other modes of travel to Pearson.

It'll cost $100,000 to wrap the 10 buses on the route, but that's covered as part of the TTC's advertising deal with Pattison Outdoor. What do you think? Will pushing this knowledge out there lead to more people using the 192?