The secret life of pigeons in Toronto

The pigeons of Toronto get a bad rap. Often maligned as "rats with wings," the birds that roost on our window ledges and flock in our public spaces are actually intelligent, social creatures with uncanny navigational abilities and complex mating rituals.

First, let's clear up a common misconception. The feral pigeons on the street are no different from carrier pigeons, racing pigeons, or that popular harbinger of peace, the white dove.

"A dove is just a white rock pigeon," says David Sugarman from the Ontario Science Centre. "There's certainly a dual perception of pigeons. One is this holy, peaceful association the other is this icky, bothersome thing that messes up our streets and our buildings and our cars, but it's the same creature."

Like all rock pigeons, to use their official name, Toronto's population originated as a species in the Middle East and were brought to North America from Europe as pets. Prized for their uncanny homing abilities, they were useful for carrying messages and prized for their coloured feathers: brown, white, mottled, iridescent patterns are common, even among the ones on the street. They also made for a tasty snack, too. Roast pigeon and pigeon pie have appeared in recipe books for centuries.

(Interestingly, Ontario used to have its own native species of pigeon. The once ubiquitous passenger pigeon was once so common in North America that airborne flocks would block out the sun. Hunted to extinction, the last one, named Martha, died in Cincinnati Zoo in 1914.)

Experts believe pigeons use the Earth's magnetic field combined with the sun and prominent landmarks to guide their long-distance flights. To send a message, notes were tied to the leg of a released bird, which would then return to its point of origin. Pigeons were awarded medals in both world wars for safely delivering important messages across battlefields and even used by Reuters to transmit stock market quotations between London and Paris in the mid-1800s.

In Canada, homing pigeons were used in marine search and rescue in Halifax in the 1890s.

"Their ability to navigate is remarkable," Sugarman says. "They can find their way back over up to 900 kilometres, which is just fantastic." In some cases, they've been clocked flying at over 100 km/h. 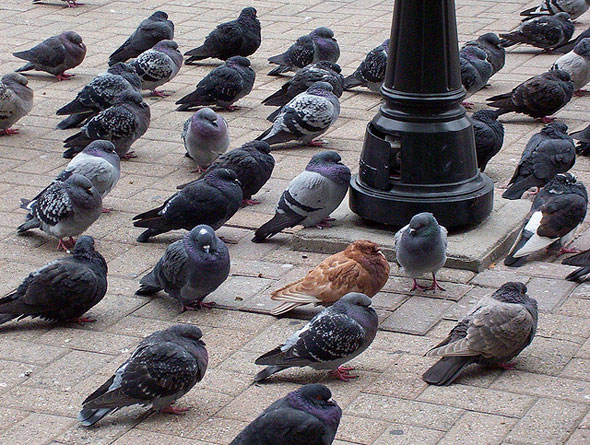 Pigeons are romantic. Lovebirds, if you will. Pairs mate for life, often with elaborate courtship displays. The male puffs up his neck feathers, coos, twirls, and occasionally flaps at the female before mating begins. Later, a brood of one or two eggs will be delivered into the nest, which is usually little more than a loose collection of twigs and paper.

Under ideal conditions, a pampered pigeon can live for more than 15 years, but most city dwellers are spent after about four. Diseases and predators such as hawks, owls, even domestic cats are chiefly responsible for keeping the population in check, though cold weather is also a factor.

Though undoubtedly smart, pigeons have the potential to pose a hazard. Over time, their slightly acidic droppings can compromise building structures. If inhaled, dried poop can transmit nasty viruses. Their dry nests can block rooftop drainage and even help feed fires.