What's the story with the secret tunnel at Queen's Park?

You might have seen it at the bottom of the stairs from the westbound streetcar stop at Queen's Park station, a pedestrian tunnel guarded by an OPP Special Constable headed northeast towards the Frost Building.

The walkway was built in 1968, five years after the opening of the University line, and connects the concourse level of the station with the Frost Building, Macdonald Block, and the Ontario legislature. Post 9/11, access is only allowed with a valid pass or visitor badge. 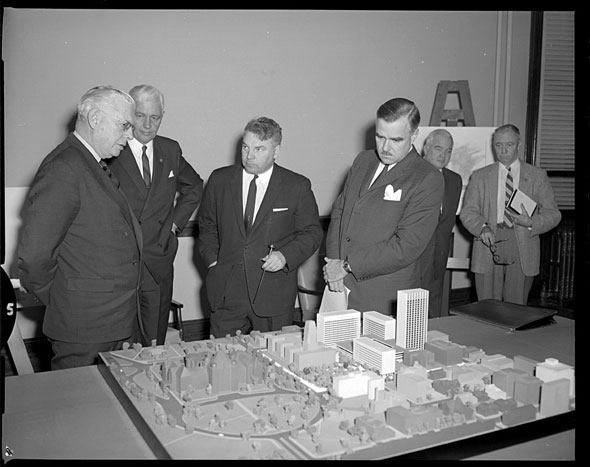 The Macdonald Block, located at the centre of four office buildings named for former Ontario premiers Hepburn, Ferguson, Hearst, and Mowat, was announced by the province in 1962. At the time, it was to be the largest office complex built in Toronto, though TD Centre would soon snatch that title.

The groundbreaking ceremony for the $50 million International-style complex was held in 1965 and construction wrapped, slightly behind schedule, in Nov. 1968. Within its marble-lined interior were several underground walkways that linked the various parts of the government offices, keeping civil servants safe from the elements.

The basement levels of the Ontario Legislative Building, Frost Building, and Whitney Block are all linked in this way, although the public is often kept out of this subterranean world.

In other directions, Queen's Park station is also connected to 500 University Ave. and the MaRS Discovery District, but it isn't tied into the wider PATH network, yet.