A piece of a popular landmark at Richmond and Spadina is no more. A graffiti removal team hired by the City of Toronto has erased the 25 metre painted tape measure that wrapped around the northwest corner of the intersection, leaving only the original engraved markings.

City spokesman Shane Gerard said the work was scrubbed at the request of Stephen Cruise, the artist behind the colourful bronze thimble and buttons that also populate the corner. Cruise's piece, which was commissioned by the city in 1997, included subtle tape measure markings etched into the concrete sidewalk, but artist Victor Fraser added the colours and additional details in 2006. 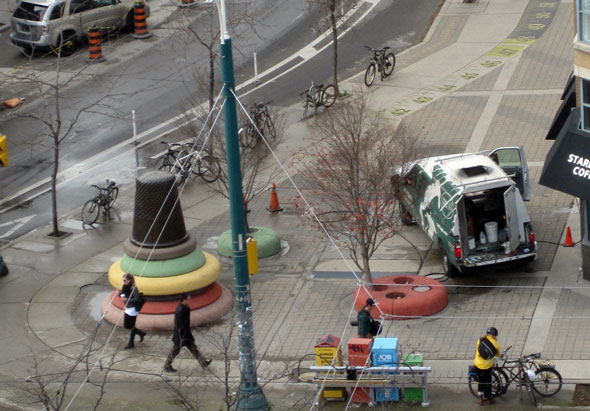 In an email, Fraser said he painted the chalk and tempera colours after the city failed to properly restore the original work, titled Uniform Measure/Stack, following construction of a nearby condo. He said he refreshed his work every two years to mitigate the effects of rain and snow.

It's unclear why Cruise decided to act eight years after the chalk colours were added at least two after being made aware of it by The Grid.

Fraser says he feels a "bit of sadness" over the removal. "If art is not funded by big banks or corporations in Toronto it is not valid and considered graffiti," he said. "I will not be doing it again even though many people have enjoyed it over the years. You cannot fight this kind of thing and win."