There are 250 kilometres of laneways in Toronto and almost all of them are underused, according to a non-profit that's trying to tap the potential of the city's back streets. Rather than using alleys for garbage collection and car storage, laneways could be transformed into bicycle thoroughfares, gathering places, markets, miniature strips of bars and cafes, even residential neighbourhoods with just a few tweaks of the rules, they say.

More than that, at a time when recreational space is becoming increasingly strained by a booming population, laneways have the potential to act like parks or even convenient and safe car-free streets. Cities like Melbourne, Australia (pictured below) have allowed restaurants, bars, and cafes to open in laneways, turning narrow downtown service roads into bustling destinations.

"We're interested in how laneways can expand our public space network," Cancelli says. "Our city is growing very quickly and our park system and public space system is finite so we want to look at laneways as another layer of public space."

Here are 5 ways Toronto could improve its laneways. 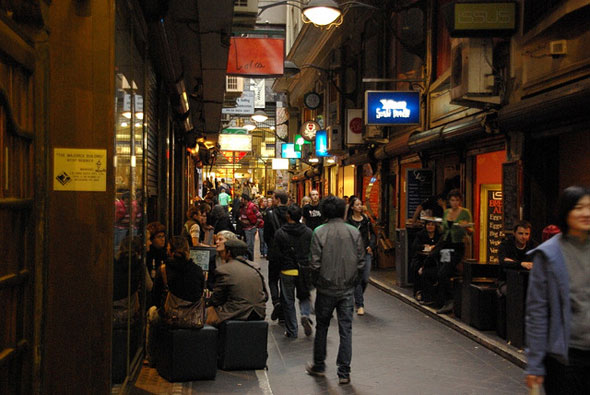 Recognize that there are different types of laneway
Right now, Toronto doesn't count laneways as public space. Officially, our back roads are for access to garages and sometimes garbage collection. "Once we can start to classify and name the different types of laneways [residential, commercial, narrow, wide] ... you can decide what you can do in one type of laneways versus what you can do in another type," Cancelli says. Laneways behind stores or restaurants might be good for patios, markets, or tiny stores, for example.

Connect up water, electricity, and sewage
One of the biggest obstacle to using laneways as commercial or residential space is a lack of basic services. "It's expensive to create laneway housing because you don't have water, sewer, and electrical," says Cancelli. Finding a way to make laneways ready for inhabitation (by expanding winter snow clearance, for example) is vital.

Give laneways names
Named laneways feel more like real places, but they are also more likely to be recognized by delivery companies and, most importantly, the emergency services. "That's one of the things were planning to do at the Laneway Project, to create a guide for communities to name their laneways," says Cancelli. Without a proper address, laneway buildings have to be approved as rearward additions to existing structures, which can prove legally problematic.

Tweak the zoning bylaws
Every house in Toronto is supposed to have a minimum of one parking space, and that's a problem for laneway houses, which often replace garages and lack the space required to store an automobile. In addition, city planning policy makes no allowances for laneway buildings and, as Toronto architect and prospective laneway home builder Brandon Donnelly writes, getting the necessary approvals is tough.

Get involvement from the public
Not every Toronto laneway is going to become a bustling strip of cafes and pubs like Vulcan Lane in Auckland, New Zealand, but without feedback from the public, none will get the chance. Right now, the city is accepting public feedback on possible changes to the official plan, the document that guides the direction of urban planning in the city. "If they see there's enough of an interest [Toronto] might start to pay more attention and put more resources towards research," Cancelli says.