Voting in Toronto is simple if you follow the rules. Read on to make sure your vote counts on election day.

In order to vote in the 2014 municipal election you must be all of the following:

Students who rent property in Toronto are eligible to vote provided they meet the above criteria.

You are prohibited from voting if you are:

WHAT TO BRING WITH YOU

In order to cast a ballot, you must bring acceptable identification showing your name and qualifying Toronto address to the polling station. If you are not on the official voters' list (check here, you should have received a voter information card in the mail) your name will be added when you vote. If you do not bring ID, you can still vote provided you are already on the voters' list.

Every address in Toronto is assigned a place to vote. Input your address in the city's MyVote tool and click "Where do I vote?" at the top of the page to find out where you will cast your ballot. 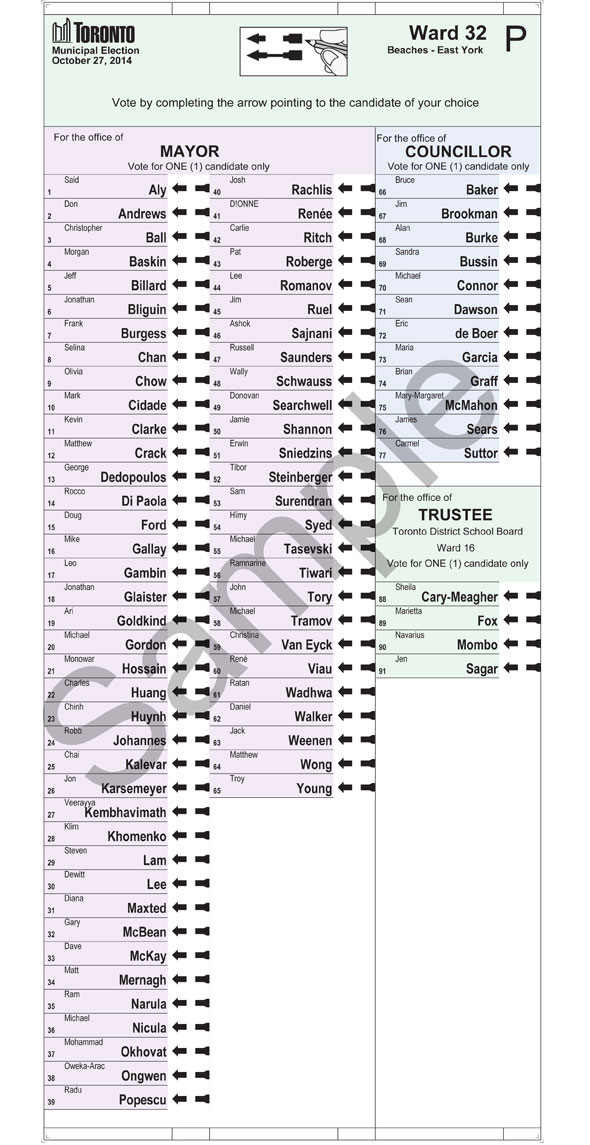 WHO TO VOTE FOR

At the polling station, you will have a chance to vote for one city councillor, one candidate for mayor, and a local school board trustee. Above is a sample ballot sheet from the City of Toronto based on Ward 32. To cast a vote, simply complete the arrow that points to the candidate of your choice. Below are some resources.

Someone must have figured out that free (or cheap) beer was the best possible incentive to increase voter turnout. If you live in Ward 19 you'll not only feel pride in doing your civic duty but a vote in the election will also score you tickets to a party and free beer. Really.

For information about accessibility, services in languages other than English, or to download additional resources, visit the City of Toronto's election site.

Toronto photo by Ian Mationg in the blogTO Flickr pool.