The Toronto election results are in for 2014, and while there weren't too many surprises, the city will have a new mayor in John Tory. Even as we have no idea whether or not our new mayor's transit plans will come to fruition, it seems sure the drama level will settle. Tonight was about, of course, more than just the race for mayor, though. 44 councillor positions were also up for grabs, and while incumbents tended to reign supreme, one can only hope this council will work better than the last one.

In case you weren't able to track all the winners and losers before hitting the pillow, here's the big list. There are a lot of familiar names -- including Rob Ford in Ward 2 -- but it's still a new era for Toronto. May it be a productive one. Let's build some transit infrastructure, please. Like, please, please, please.

The race between John Tory and Doug Ford was tighter than late polls indicated, which might give Toronto something to think about, particularly given Rob Ford's promise to run for mayor once again ins 2018. 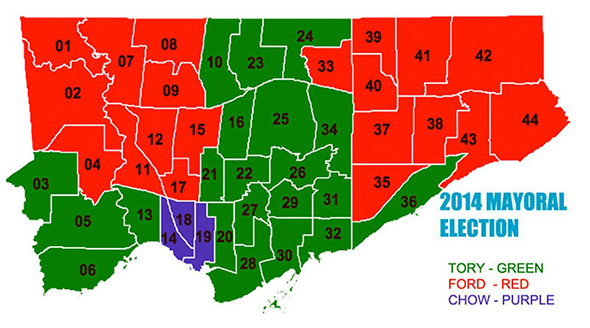 As far as the ward-by-ward breakdown goes, here's what the city looks like. The old urban/suburban lines remain in place, even as Tory was able to make crucial inroads in North York. This wasn't the knock-out victory that some thought it would be. Toronto still suffers from the growing pains of amalgamation, more than 15 years after boroughs united.