The 5 most sensational crimes in Toronto history

Toronto might have earned the nickname "The Good" for its upstanding Victorian morals, but in the twentieth century, sensational high-profile crimes were splashed across the front pages of the city's newspapers, shocking and titillating the conservative denizens. Revenge shootings, curious disappearances, and spectacular bank robberies sell newspapers, after all.

Here are 5 of the most electrifying crimes in the history of Toronto.

The shooting of "Bert" Massey
The Massey family name is all over Toronto. The numerous decedents of Hart Massey, the founder of agricultural machine company H. A. Massey and Company, lived in luxury thanks to the continued success of the company into the 20th century. "Bert" Massey, the grandson of the company's founder, was "a vain ne'er-do-well, a respectable cad," in the words of Torontoist's Kevin Plummer.

In February 1915, walking up the path to his home on Walmer Road, he was shot dead by a family servant, Carrie Davies. "You ruined my life," she screamed. 18-year-old Davies alleged that Massey had tried to rape her the day before and, at her closely watched trial, told the court her employer offered her a ring and said that he "liked little girls" like her.

Davies was eventually found not guilty of murder. She later married a farmer and died in 1961.

The disappearance of Ambrose Small
One of the most famous Toronto police investigations may not have involved a crime at all. Wealthy theatre magnate and notorious womanizer, Ambrose Small, ran a small but extremely profitable theatre empire in 1919. That year, at the peak of his power, he decided to sell his company for a staggering $1.7 million--about $21 million in today's money.

The first cheque he deposited from the company's new owners was for $1 million. He deposited it at the Dominion Bank at King and Yonge and vanished the next day. He was never heard from again, and no trace of his body was ever found. John Doughty, the tycoon's closest employee and ally, was later found to have stolen $150,000 in bonds from the company safe but police lacked evidence tying him to the disappearance. The case remains unsolved. 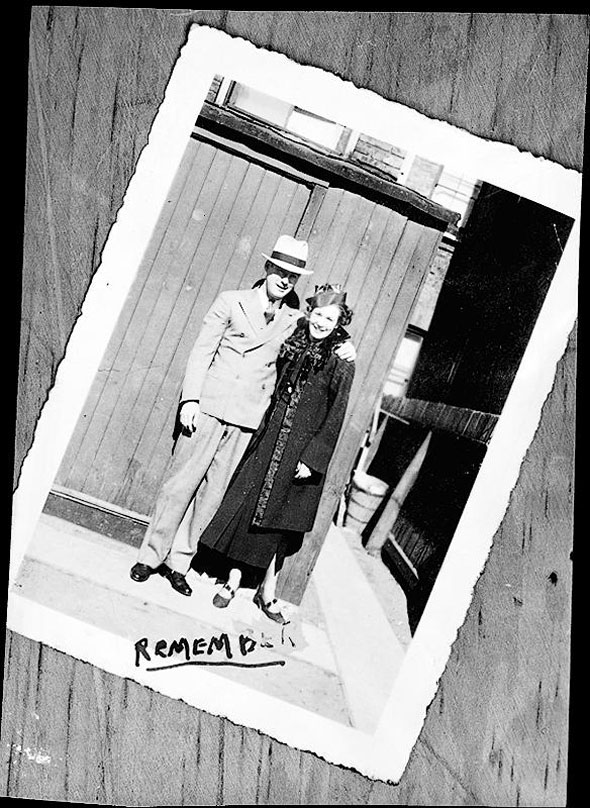 The bloody murder of Jimmy Windsor
Jimmy Windsor was an underground bookie in the 1930s. One evening in January, 1939, four men, their faces shielded by handkerchiefs, gained access to the Windsor household, where they shot and savagely beat the gambling ring leader to death in front of his family.

The murder was labeled by the press as the first gangland killing in Toronto, and the case attracted widespread public attention. When detectives failed to turn up any significant leads (much less make an arrest) for weeks after the brutal slaying, speculation began to grow that hired goons from Buffalo were responsible.

In the end, police managed to charge Donald "Mickey" McDonald with carrying out the killing. McDonald, known as the "mad dog of Jarvis Street," was already in custody in connection with the murder of a Toronto bootlegger but was eventually acquitted of the Windsor murder. As David Wencer recalls at Torontoist, McDonald became one of the city's most notorious criminals before famously escaping from Kingston Penitentiary in 1947 and vanishing for good.

The Boyd Gang's spree of bank robberies
In 1954, police in Ontario launched the biggest manhunt in Canadian history. Their quarry: Edwin Boyd, Leonard "Tough Lennie" Jackson, Willie "The Clown" Jackson, and Steve Suchan, aka The Boyd Gang, a notorious team of bank robbers whose gun-happy exploits terrified and entertained a straight-laced Toronto.

Boyd met his partners in crime while serving time in the Don Jail. They hacksawed their way out of the prison and fled into the streets of Riverdale. Gangs of cops armed with rifles and machine guns scoured the city, but couldn't scare up the group. Over the next four months the Boyd Gang conducted several high-profile bank raids, stealing almost $75,000--almost $700,000 in today's money.

The group were eventually re-captured and returned to the Don Jail where they escaped again into the Don Valley. They were picked up without incident four days later. Suchan and Lennie Jackson were hanged in 1952 for capital murder. Boyd was sentenced to eight life sentences and Willie Jackson got 30 years. Both were paroled in the 1960s. Boyd died in 2002. 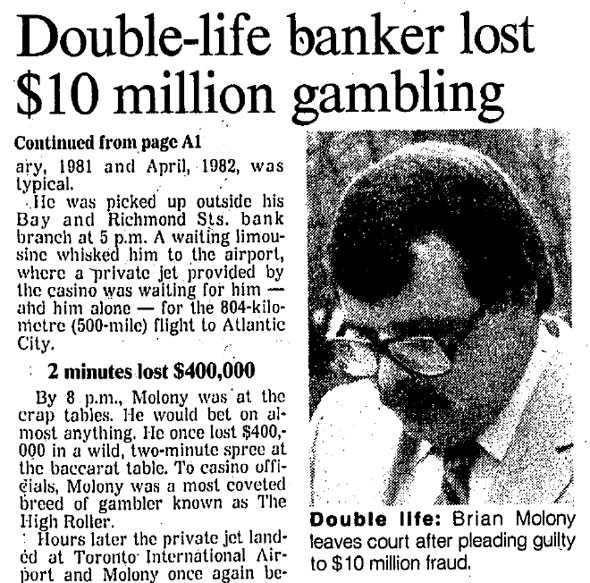 Brian Molony gambles (and loses) $10 million of CIBC money
Molony just couldn't stop himself. By day, the 26-year-old Toronto CIBC bank clerk was responsible for approving loans from an office at Bay and Richmond, by night, he was a serial Atlantic City gambler, spending money he had gifted himself from of his employer's coffers using fictitious names.

At his peak, Molony dropped $1.2 million in a single night. His spree might have lasted longer had he not been pulled over for speeding on the way back from Toronto International Airport in 1982. Cops found $30,000 in U.S. bills in Molony's trunk--more than his annual salary--and another $7,000 at his High Park apartment. Molony spent six years in prison before returning to the financial sector. His story was later the subject of the 2003 movie Owning Mahowny, starring Philip Seymour Hoffman.