5 things Toronto could learn from Stockholm

Spread across fourteen islands close to the western shore of the Baltic Sea, Sweden's capital city is an economic powerhouse. The metropolitan area of some 2.2 million people (slightly fewer than Toronto) is responsible for roughly a third of the entire country's gross domestic product.

True to Swedish form, the Stockholm Metro, which opened a few years before Toronto's subway, is an architectural dream. Caverns of painted exposed rock, sculptures, and permanent art installations make the system a pleasure to explore, as well as ride. On the surface, a successful and increasingly popular congestion pricing scheme has quelled traffic and locals are allowed to enjoy a beer in many of the city's parks and gardens, despite the country maintaining liquor laws similar to those in Ontario.

Here are 5 things Toronto could learn from Stockholm. 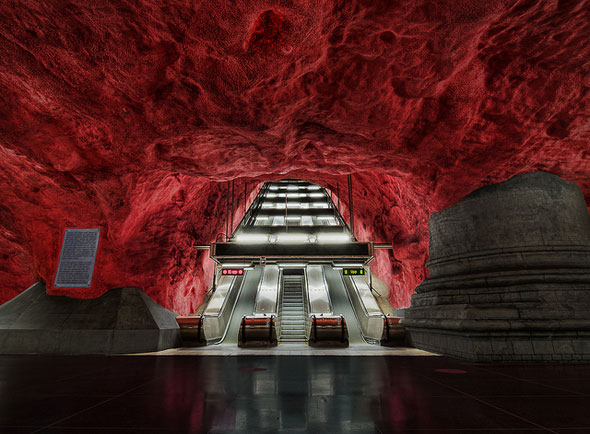 There's value in making subway stations attractive
The Stockholm Metro, the Stockholms tunnelbana to the locals, is filled with sculptures, mosaics, paintings, and other works of art. The architecture is impressive, too. In some stations the bedrock has intentionally been left exposed, making the walkways, ticket halls, and platforms look like a convenient network of caves. Creative painting has turned the textured walls into roiling storm clouds and canyons of ice.

Building a beautiful subway costs additional money, but cities that invest in public art and powerful architecture appear to be getting a return on their investment. An Italian study found that transit riders were willing to pay more, wait longer, and walk further to reach well-decorated train stations. Fingers crossed those results bode well for the Spadina line extension, which is going to feature its own compelling station designs.

Get people involved in the subway design process
When trains start running on Stockholm's nine-station, $4.5 billion subway line, the people filling the seats will have had limited say over its appearance and layout. One way the city is giving riders a modicum of control over the new line is by allowing residents (well, anyone with an email address, actually) to select the colour on the subway map. Entrants must provide a rationale for their choice and the winner of a public vote will receive a year's free transit. Yellow, brown, purple, and pink are proving popular, according to Quartz.

Opinions can change on congestion pricing
Like London, Stockholm was among the first major cities to introduce a congestion pricing scheme. During the six-month initial trial, the idea of charging vehicles a small fee to drive in the city centre was unpopular. Despite frowns from drivers, congestion fell by more than a quarter. When a referendum was held on the question of making the pricing permanent in 2007, the majority of city-dwellers backed the concept (suburban commuters didn't, however.)

By 2011, a study showed steadily growing support for congestion pricing. The resulting reduction in traffic, cleaner air, increase in transit use, and switch to fuel-efficient vehicles, which are exempt from the charges, had translated into a 70 percent approval rate. There was even tentative support for raising the prices. The take away for Toronto: try it, you might like it. 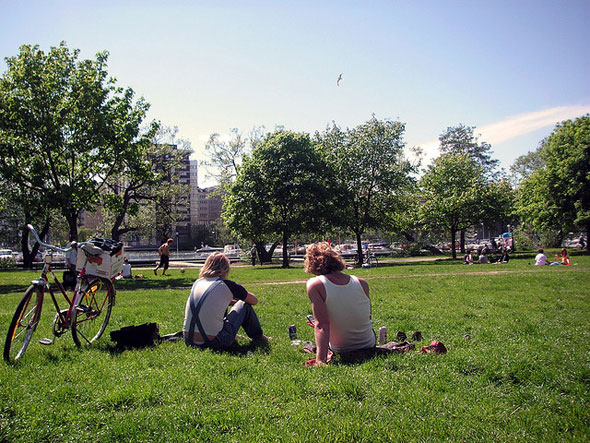 Outdoor drinking is OK, even with government-controlled liquor sales
Like Ontario, the sale of wine, liquor, and strong beer in Sweden is only allowed through a chain of government-owned stores similar to the LCBO. Light beer (under 3.5 percent) is available in corner stores, but the Systembolaget outlets are just as (if not more) Victorian as Ontario's LCBO. Stores close at 6 p.m. during the week and 1 p.m. on Saturdays. Sundays? Forget about it.

Despite tight control on the sale of liquor, Stockholm still permits drinking in most outdoor places. Some parks have banned alcohol, but most others permit controlled drinking between certain hours (i.e. not late at night,) allowing for an after work tipple in the summer or a glass of wine with a weekend picnic. Doesn't sound too heinous, does it?

Cycling is a viable transportation method, even in the cold
Stockholm, like Toronto, gets cold in winter. Snow is frequent and temperatures often dip into the minus double digits. Yet despite the harsh weather, about 10 percent of people use a bike to get around Sweden's capital, according to Copenhagenize. In Toronto, even the most bicycle-friendly wards top out at around 8 percent.

Cycling in Stockholm isn't without its issues. Patchy snow clearance and a number of other factors appear to be creating a situation where people are getting hurt. As a result, studded tires are a must in cold weather when compacted layers of ice turn bike lanes into a slippery gauntlet. Perhaps Toronto could bump its figures with some winter friendly infrastructure upgrades, like plowed bike lanes.