Two years out from the info pillar fiasco, the City of Toronto is rolling out the first prototype in a series of improved signs and maps. The signpost at Queen and Bay, which was installed in the last couple of weeks, is the result of several years of effort to improving the city's navigational aids.

Enemies of the info pillars will be disappointed, however. The old designs, which are part of the city's street furniture contract with Astral Media, may receive minor tweaks but will largely remain untouched.

"The initiative that we have right now is folding those [info] pillars into the program, but we're developing a new type of sign product that's a whole lot better than the info pillar," says Chris Ronson, a pedestrian project manager with the City of Toronto.

Following the fallout from the heavily maligned info pillars, which drew complaints about blocked sight lines, impeded sidewalk space, and ad creep, the city decided to independently develop its own set of signs and investigate ways of making the old pillars more useful.

The cumbersome design of the info pillars will remain, but the maps will be refreshed. The city's new wayfinding will be ad-free, save for a small space reserved for a sponsor's logo.

"We've been working on the design and development of the project now for about a year or two," Ronson says. "Our public consultation hasn't ended yet, we have a week of intensive consultations this week. Some of that input will lead to some tweaks of the product that you see out there on the street." 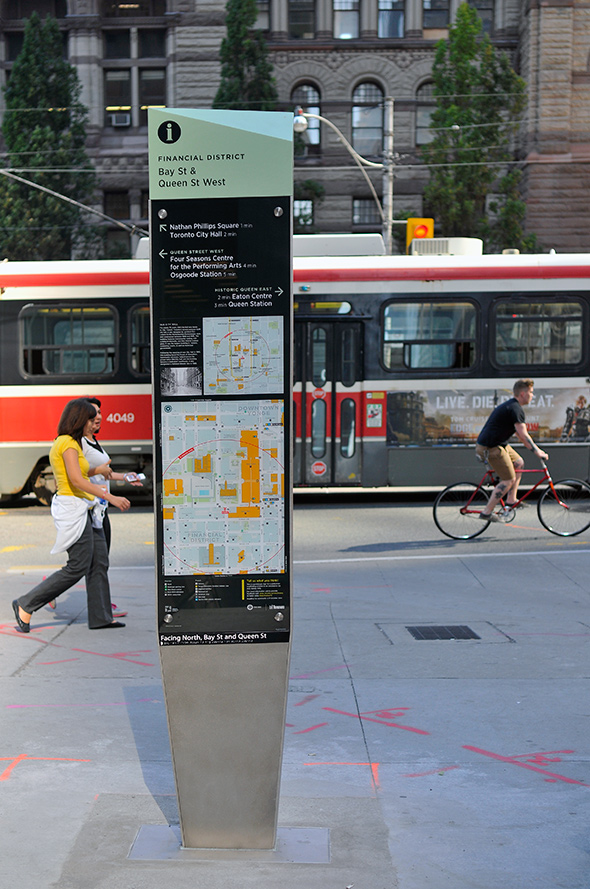 In the lead up to the Pan Am Games, the city will launch a pilot project in the financial district between Union Station and Queen Street that will include 15 new signs with updates based on public feedback.

Ronson says the current prototype includes multiple layers of information, such as the locations of nearby transit stops, bike share stations, and PATH entrances. There are also directions to important nearby landmarks and attractions, publicly accessible private spaces, and parks.

"Obviously, you can't put everything on the map, so we have to be very careful not to overload the map with stuff or it just breaks down."

What do you think of the new designs?