Developers have released the first firm details of a massive 8-acre, $2 billion downtown office development that will include a new GO Transit bus terminal, two 48-storey towers, and an elevated park over the Union Station rail corridor.

The long-rumoured 251,000 square metre development is planned for the east side of Bay between Front and Lake Shore. According to Metrolinx and Ivanhoé Cambridge, the developer behind the project, part of the complex will straddle the Union Station rail corridor, providing space for a new aerial park, a first for Toronto.

The developers are calling it a "sky park."

"We think 45-141 Bay represents one of the best locations and development sites in the country," said Ivanhoé Cambridge CEO Daniel Fournier at a press conference this morning. He said the project will be a "game changer" for his company.

The architectural designs were produced by Wilkinson Eyre, a UK-based firm that is currently working on the renovation of the famous Battersea Power Station in London. Paul Gleeson from Ivanhoé Cambridge called the diamond textured towers "inspiring, world-class architecture."

The new, larger GO bus terminal will be integrated into the podium of the south tower at 45 Bay Street and feature connections between Union Station and the PATH network. Ontario Transportation Minister Steven Del Duca said the new bus terminal will make Union "a one-stop shop" for transit.

The north tower, located at 141 Bay Street, will fit between the back of the Dominion Public Building and the rail corridor.

Construction is expected to begin next year, pending city approval and the number of signed agreements to lease the new space, and be completed by 2018.

What do you think of the project? 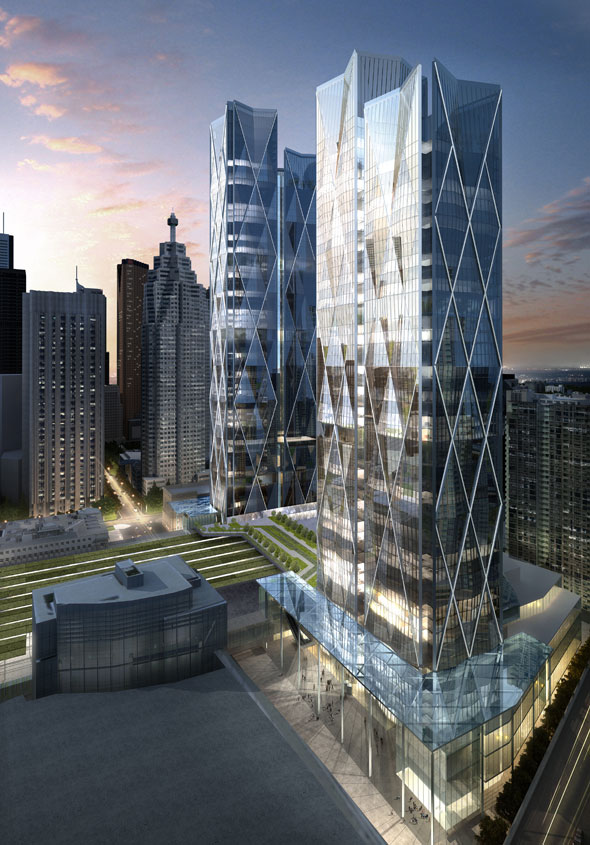 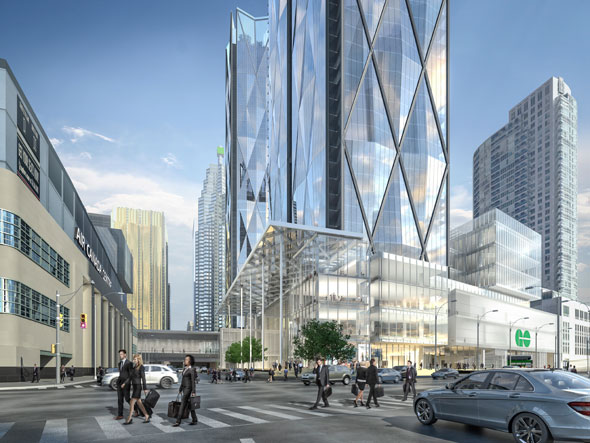 The south facade looking north from Bay and Lake Shore (minus the Gardiner.)

Note: An earlier version of this post incorrectly stated that the new GO bus terminal would be located at 141 Bay Street, north of the rail corridor.