The transit fan's guide to the 5 longest TTC routes

Some TTC rides seem to take forever, others really are significantly longer than the others. Of the more than 150 bus, streetcar, and subway routes, only a handful break 40 kms while making a round trip. The longest of all covers more than 53 kms travelling end to end to end.

I had to be selective about which transit routes made the list. There are night buses that cover a greater distance than the city's longest line, the 54A Lawrence East (the 300A from Pearson to Warden station along the Bloor-Danforth route is a 75.97 km round trip, for example,) and some weekend routes that disappear on lengthy tangents, depending on the day of the week or the time of year. Both were left out.

The distances noted below represent the length of a return journey, because that's how the TTC measures the distances of its routes in its annual service summary (some routes take a different path depending on the direction.)

Here are the 5 longest transit routes in Toronto.

54A Lawrence East: 53.90 kms
The longest round trip available on the TTC is the 54A Lawrence East bus, which travels from Eglinton station in midtown to Starspray Blvd. near the mouth of the Rouge River, via Lawrence East RT station. The trip takes about an hour and a half and services Don Mills, the "Ben Jungle" between Bellamy and McCowan (all the roads start with "Ben" (Benorama Cres. is the best)) Thomson Memorial Park, and Highland Creek.

501 Queen: 50.88 kms
Not only is the 25 km trip from Long Branch to Neville Park the longest streetcar journey in the city, it's the longest on the continent. The venerable old Queen streetcar, which traces its history to the late 1800s, passes through the Beaches, Leslieville, Riverdale, Corktown, Downtown, Queen West, Parkdale, and Etobicoke on its journey from (almost Scarborough) to the western city limit. The line might struggle with delays and management issues, but National Geographic still saw fit to include it in the book Journeys of a Lifetime: 500 of the World's Greatest Trips in 2007. 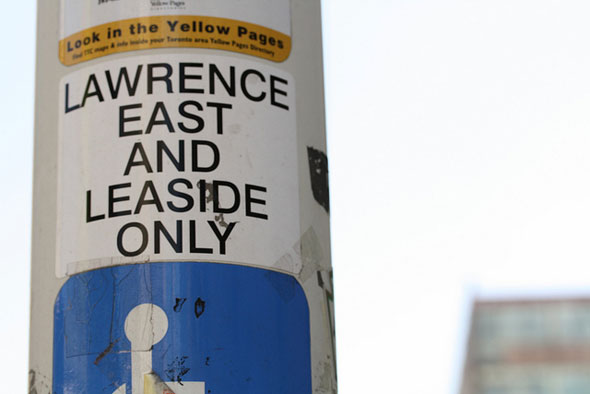 52B Lawrence West: 47.55 kms
The western leg of the Lawrence bus is just a few kms shorter than its eastern counterpart. Heading west out of Lawrence station, the bus calls at Lawrence West station, Weston GO station, and Pearson before turning back at Morningstar Drive in Mississauga near Westwood Mall. An additional fare is required for passengers leaving Toronto on the slightly longer "B" version of the route. A roundtrip on both Lawrence buses would cover more than 100 kms.

96A Wilson: 43.63 kms
The winding Wilson bus spends more than half of its lengthy 44 km route twisting and turning from Wilson and Weston Rd. to Glendale Memorial Gardens, servicing Humber College. The bus starts (or ends, depending on your perspective) at York Mills station. During peak periods, a round trip takes almost two and a half hours, according to the TTC, with buses traveling at an average of 19.7 km/h.

39B Finch East: 43.12 kms
Pushing along through city's northernmost neighbourhoods, the 39B rush hour version of the 39A Finch East bus covers 43 kms on its round trip from Finch station at the northern end of the Yonge line to Valley Centre Drive in Scarborough, near Old Finch and Sewells. Visitors to this distant corner of the city can check out an abandoned set of roads near where Old Finch curves north and becomes Sewells. Built in 1912, the Sewells Road bridge over the Rouge River, a short walk north of the bus terminus, is one of only a few suspension bridges in the province.