5 things Toronto could learn from Copenhagen

Over the least 50 years, Copenhagan has transformed itself from an auto-focused city into a paradise for cyclists. Every day, more people bike to work in Denmark's capital and its surrounding urban area than in the entire United States, despite the city having less than one percent of America's population.

Cycling detractors in Toronto often point to the weather, believing that cyclists will flee during a cold snap regardless of the available facilities (just like hockey players don't.) Copenhagen's winters are mild compared to Toronto, but the city still sees frequent snow and rain during its coldest months. Despite the frigid conditions, cycling remains attractive year-round, in part due to the quality of the infrastructure. Toronto, it seems, needs to find a way to make cycling pleasant in the cold as well.

Here are 5 ideas Toronto could borrow from bike-friendly Copenhagen.

Painted lanes, plastic bollards, and the occasional priority signal are the best Toronto cyclists can hope for in terms of technology. Copenhagen, meanwhile, is pioneering tech that not only benefits current cyclists, but makes riding a bike a more attractive proposition in general. Take the "green wave," for example.

Embedded in the division line between the bicycle and auto lanes, little green LED lights count down the time to the next red light. Stay ahead of the moving lights by cycling at a constant 20 km/h and the reward is an unbroken chain of green lights, fall behind and be prepared to stop at a red light (luckily, more than 100 intersections give cyclists a six-second headstart over traffic, so stopping isn't so bad.)

Add to that angled garbage cans for cyclists and specially flattened cobblestones that minimize bumps and slips while maintaining the city's historic character, and you will understand why the 41 percent of people in Copenhagen use a bike to move around the city.

Build useful (and fun) cycling infrastructure
Copenhagen's central city is criss-crossed with canals and lagoons, making reaching some island locations with just a single access point a challenge to reach, especially for cyclists. Today, just three road bridges cross the central harbour that divides the city in half (though six more are under construction.)

Opened this year, the lauded Cykelslangen or Cycle Snake is a winding, bicycle-only bridge that closed a missing link between two popular bicycle routes and diverted bikers away from a busy pedestrian crossing.

At 220 metres long, the bridge takes about two minutes to cross and provides panoramic views of the harbour. "I think it's a real urban experience," says Clotilde Imbert, an urban designer with Copenhagenize Design Co. in a video. "You turn, you turn, and finally you discover the harbour and the other bridge, it's magical."

Make bike lanes the safest part of the street
Sharrows, the little painted arrows that are meant to indicate where cyclists should ride, are a cop out. For a bike lane to be an attractive proposition, it needs to feel totally safe. In Toronto, too many painted lanes are used to protect parked cars, meaning that a door prize could come from either side, especially in traffic or close to intersections. Copenhagen's lanes are located on the inside of street parking (where it still exists) and are slightly raised from the road to keep out potential intruders. Door prizes are treated as a serious offence.

The city is also making a priority of widening its bike lanes to allow easier overtaking and conversational riding. Busy sections of track can be up to 4 metres wide (the Sherbourne St. separated lanes are 1.7 metres wide, for comparison) and bike lane design is uniform across most of the city, instead of the weird hodgepodge offered in Toronto. Cycling fatalities are rare in Copenhagen, despite most riders shunning helmets. Some riders even listen to MP3 players while riding. 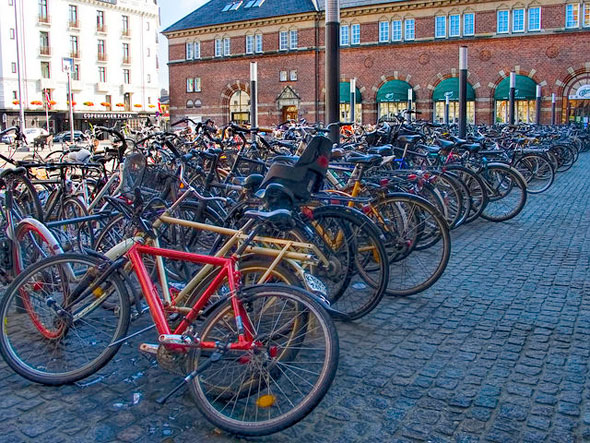 Improve bicycle parking
Toronto's simple yet effective "ring and post" bicycle lock is a design classic. The trouble is, as more and more people choose to travel by bike, the tiny capacity of each ring and post can make it difficult to find a space, especially on popular cycling routes like College. Though it's legal to lock a bike to almost all Toronto street furniture, the result is a cluttered obstacle course for pedestrians and people who use mobility devices

Copenhagen likewise struggles to corral its masses of bicycles, but the city is working to mitigate the issue. A "Checklist for Bicycle Parking," issued by the local government and based on a set of citywide design principles, provides simple guidance to anyone building bike parking.

Racks should be a maximum of 30 metres from the intended destination and allow for at least 50 cms between bikes, the document says. In larger facilities, there should be adequate lighting and the layout should eliminate spaces where thieves could work unnoticed.

Find a way to build rapid transit quickly
In 2001, Copenhagen had zero rapid transit stops. By the end of the decade, the city will have 40 stations across four lines, almost two thirds the number of subway and RT stops operated by the TTC. The initial phase of the driverless, light rail network, which runs in a tunnel through the central city and on an elevated track elsewhere, was funded in part by selling land and building rights to private investors. The city gained a new neighbourhood, and the improved transit links lured new investment. The total cost was about $1.3-billion Canadian.

The second, $4-billion phase of the Copenhagen Metro will add two new lines: an underground city circle and a new line to the northeastern part of the city, both of which are due to open in 2019 (as it currently stands.) The cost of the second phase was split between the city of Copenhagen, neighbouring Frederiksberg, and the state government.

The costly Metro expansion isn't without its critics, however. Copenhagen is a compact city easily covered on foot or by bike, and some residents question whether the money could have been better spent elsewhere. Either way, the city has built itself a rapid transit system--quickly. Toronto, on the other hand, is still figuring out how to fund the Downtown Relief Line.