The story of the last new streetcar launch in Toronto

In the early 1970s, the TTC, like transit providers in Los Angeles, Washington D.C., Montreal, Vancouver, and numerous other cities, was preparing to do away with its streetcar network. With each new underground extension, the TTC planned to shut down its surface rail in favour of buses.

After opening the Yonge, University, Spadina, and Bloor-Danforth subways, streetcar routes on Dupont, Bay, and Coxwell were taken out of service. By 1980--the planned opening year of the Queen St. subway--the last Toronto streetcars were supposed to have vanished.

Enter Streetcars for Toronto, a group of activists determined to preserve the city's higher-capacity rail vehicles for future generations. In Nov. 1972, the group succeeded in their aim, when council voted to keep the city's streetcar network, albeit in a scaled-down form.

"Streetcar services were much more frequent in 1972 than they are today," transit advocate and former Streetcars for Toronto member Steve Munro wrote at Torontoist in 2012. "St. Clair had cars leaving Yonge Street every 90 seconds during rush hour. Of the downtown routes, only King has service now that is even close to 1972 levels: the system's overall capacity has declined due to a shrinking fleet of vehicles." 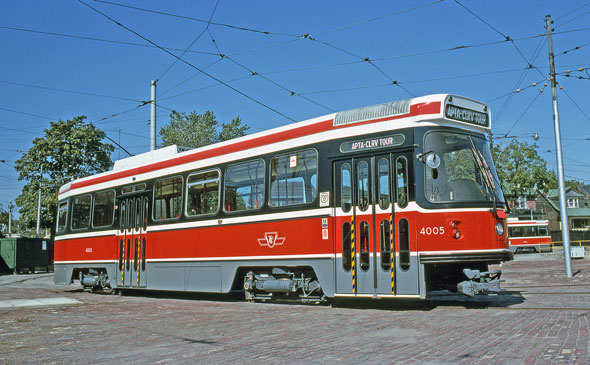 The decision to keep the city's streetcars wasn't a simple one. The TTC's Presidents' Conference Committee streetcars were in urgent need of replacement, but no successor was in development.

The result was the Canadian Light Rail Vehicle (CLRV,) which began arriving in Toronto in 1977. The first six cars were built in Switzerland and shipped to Canada with inward-facing bucket seats at the front and bright red interior trim.

At the CNE in 1978, The Star cooed over the "space age" new streetcars with their large front windows and streamlined shape.

"The CLRV is a handsome creature, more efficient, more durable, more attractive, and more comfortable than any of its predecessors. It requires less energy to operate--33 percent less than a PCC car, for instance--[and] makes less noise. Its lifetime is at least 25 years. By that time, Toronto's romance with the streetcar should look like a marriage made in heaven."

Though the TTC chose to operate them as individual cars, the red, white, and black CLRVs were designed firmly with light rail applications in mind. They could, before the removal of their couplers in the 1980s, be joined together and operated as a train at speeds of up to 80 km/h.

The Scarborough RT--the city's first light rail line--was going to use CLRVs before the UTDC successfully convinced the TTC to buy its new linear-induction vehicles. (The disused turning loop at Kennedy station was built before the change). 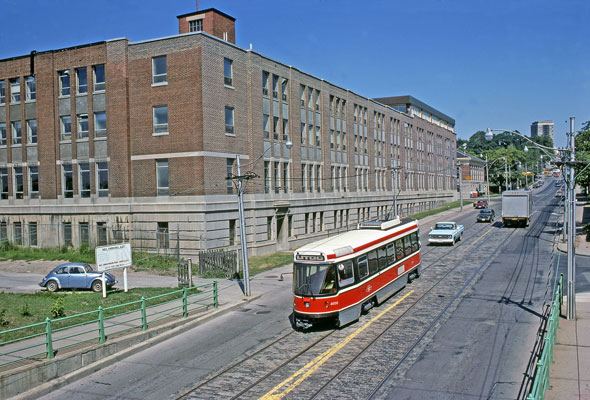 The remaining 190 CLRVs were built in Thunder Bay with the faux wood interior and rows of seating we know today, but there were still odd quirks. At first, the windows of the new streetcars were sealed in anticipation of air conditioning (only one CLRV, #4041, has AC, a relic of an abandoned retrofitting scheme.)

The Swiss-built streetcars were retrofitted to match the updated seating arrangement, but the red interior trim still remains on the ceiling, seat backs, interior dividers.

Intensive street testing took place through the winter of 1978. The new streetcars were thrashed: brakes slammed and accelerators stamped. Worn track presented a problem for fresh wheels and there were several derailments, many of them near the Roncesvalles carhouse.

Despite the issues, the praise was near universal from drivers. TTC inspector John Robinson said boarding a CLRV was like upgrading from a Volkswagen to a Cadillac.

The new streetcars were launched Sept. 30, 1979 on the now defunct Long Branch line. Bathurst, St. Clair, Kingston Rd., and the Downtowner routes got theirs in 1980. Queen, King, Dundas, and Carlton were the last routes to be populated in 1981. 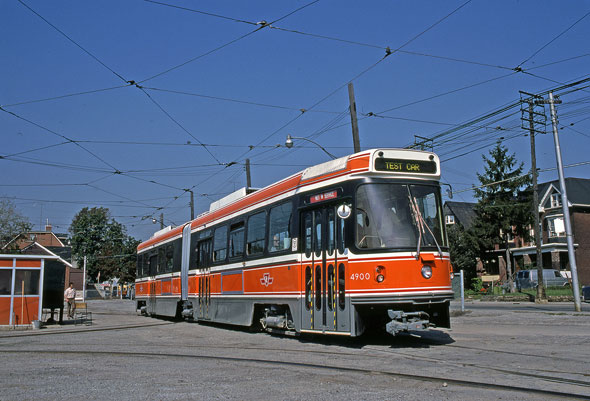 The articulated streetcars--the longer vehicles used on Queen and occasionally Bathurst--weren't delivered with the original fleet, though they were conceived around the same time.

The original TTC order for 200 regular CRLV streetcars was revised to 196 so that the remaining four could be used as a base for two extra long prototypes.

Blog Transit Toronto says the first ALRV, which was painted orange, had an electronic roll sign, and a pantograph for drawing electricity from the overhead wires, entered test service on Queen in 1982. The remaining 52, all of which are still operating on Toronto's streets (to date only one CLRV, #4063, has been scrapped) arrived between 1987 and 1989.

Catch them while you still can.

Chris Bateman is a staff writer at blogTO. Follow him on Twitter at @chrisbateman. Images: John Bromley, City of Toronto Archives