Should Toronto mark off public and private space?

In light of Brookfield Properties' highly publicized bike confiscation scandal last week ("Bikegate,") and the same company's manhandling of a busker, councillor Kristyn Wong-Tam is asking the city to look at the possibility of marking the often invisible line between public and private property.

If you recall, Brookfield Properties, the owner of the Hudson's Bay Centre at Yonge and Bloor, removed a bike that was legally chained to a street fixture on public property and placed it in storage--no note of explanation. The incident was, of course, a PR disaster.

There's some precedent for demarcating public and private: New York City property owners occasionally mark such lines with metal plaques or discreet strips etched into the pavement. Toronto property owners sometimes do the same, but there are no rules requiring boundary markers. 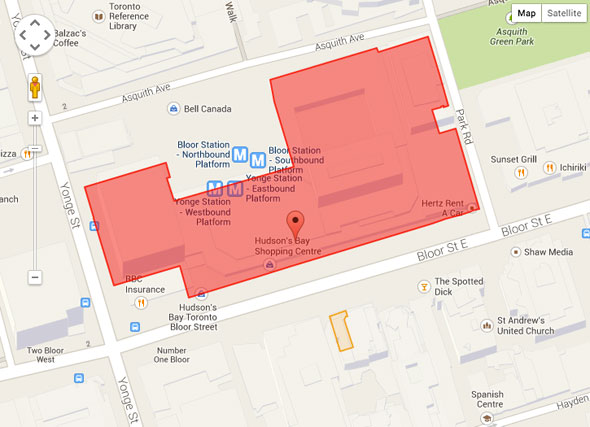 Confusion tends to arise when buildings are set back from the street, Wong-Tam writes in her city council motion. At the Hudson's Bay Centre there is a portion of sidewalk in front of the building, which is technically private property. Brookfield staff wrongly assumed--perhaps because there's no clear marker--that their portion of the sidewalk was larger (it's also possible the security detail saw itself as unofficial by-law officers).

Late last month, the city unveiled the first in a series of privately owned publicly-accessible space (POPS) markers at CityPlace. The little plaques, which are the brainchild of councillor Josh Matlow, label spaces that are not owned by the city but are still freely accessible, in effect blurring the line between public and private.

The motion, which is backed by cllr. Matlow, is up for debate at next week's city council meeting.

Should the city draw a line in the sand, so to speak, between public and private space?