Imagine sprawling marshland at the foot at the foot of Spadina Avenue. This urban design proposal, along with seven others, has made the short list for the inaugural NXT City Prize. The competition, which challenges people under 30 years old to reimagine Toronto's public spaces, received over 120 submissions, many of which think outside of the box when it comes to the possibilities for urban space.

Slipscape converts the area around Maple Leaf Quay into a marshy area complete with a meandering dock, floating pavilions, and breakwaters. It would be a significant departure from current areas along the central waterfront, which do little to gesture to the harbour's natural roots. 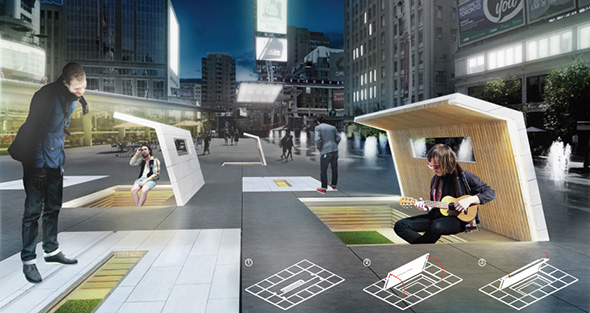 Other highlights include a massive lookout deck for Riverdale Park (which sounds great), an under-interchange park at Allen Rd. and the 401, and public seating the retracts into the ground in public plazas. None of the ideas are particularly vast in scope, but rather they focus on novel ways to improve existing public spaces through visionary design. It's something Toronto could use more of, quite frankly.

And while it'll be a major challenge to get any of the proposals will be actualized, the competition is worth $5,000 to the winner and provides access to an additional $10,000 to implement the project along with a working group of professionals to aid in the process. The final selection will be announced on August 14 at an event hosted by Dstil, the studio who has helped to run the competition. In addition to the winner, a People's Choice award will be awarded to the proposal that receives the most likes on Facebook.