Cute, crafty and toxic - meet the raccoons of Toronto

They're cute, they're crafty, and there are hundreds of thousands of them living among us. Have no doubt, Toronto is a city of raccoons. Various estimates put the population somewhere in the range of 100,000 to 200,000 - that's about 12 of them per square kilometre, sleeping in garages, fighting, and poking through garbage.

"They're really, really adaptable," says Mary Lou Leiher from Toronto Animal Services. "So if there happens to be humans in their environment, they can adapt to that. They do make a connection between humans and their food source. Garbage is obviously a main food source for raccoons - it's the main thing they forage on."

In the wild, the raccoon diet consists mainly consists of berries, eggs, insects, and other omnivorous fare. They typically live in trees and tend to avoid open spaces such as clearings. Noises such as whoops, snarls, purrs, and terrifying screeches are common, even among their urbanized cousins.

Like most animals, raccoons tend to stay close to a ready supply of grub, especially if someone is intentionally leaving it out. Most of us do just that every compost collection day. Special straps and clips are often no match for their remarkably dextrous hands and sharp teeth. Raccoons have even been observed teaching bin-busting techniques to their offspring.

"Once raccoons have learned to open a latch - it sounds like something monkeys do - they seem to be able to retain that memory for years," says animal expert David Sugarman from the Ontario Science Centre. "They're one of the few animals that can teach it to their young."

The financial burden of dealing with Toronto's raccoons is unclear, but last year Animal Services collected some 4,398 dead raccoons, and another 2,455 that needed medical attention. In an attempt to curb garbage raids, the city's solid waste division is working on a way to better seal green bins. 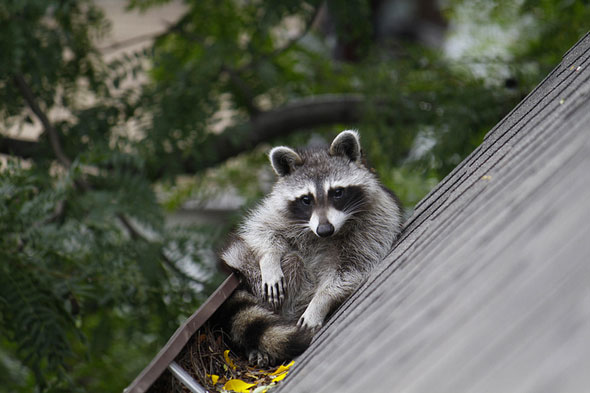 Toronto has an odd relationship with its iconic critters. Like other pests, urban raccoons have the potential to damage property and carry disease, but attempts at controlling their numbers are usually met with passionate resistance. Maybe it's their size, maybe it's their little faces, but most people balk at calling an exterminator to deal with unruly raccoons.

They aren't all cute, however. Almost 75% of raccoons have toxic poop, says Sugarman, who has a background in parasitology, the study of parasites.

"There's a roundworm carried by raccoons that's really quite dangerous ... it's creepy. It lives OK in the intestine of raccoons, but if another animal ingests it, the larvae, the little worms that hatch out of the eggs, mostly what they do is migrate through the body and take up residence in various organs."

Baylisascaris procyonis is particularly nasty if passed on to humans. The eggs can be inhaled, absorbed through skin on contact, or soaked up by the digestive system if eaten, leading to myriad discomforts, sometimes skin irritation, difficulty breathing, and even permanent eye and brain damage.

"No drugs have been shown to be totally effective for the treatment of Baylisascaris infection," the U.S. Centers for Disease Control and Prevention ominously warns on its website.

"People really should be aware of this roundworm and make sure that they keep their sandboxes covered. If you find a pile of this stuff on your deck, you've got to be really careful to remove it," says Sugarman, who advises wearing a face mask or respirator.

"You've got to bury it or burn it. Some people have said pour boiling water on it or carefully use a blowtorch, because that really is the only way to get rid of these damned eggs."

As city dwellers, we will have to get used to the presence of raccoons, says Mary Lou Leiher, because like them or loathe them, they're here to stay.

"We're always going to have raccoons; they're not going anywhere. We can try to eradicate them - it will not work. And so what we really have to do is learn how to live with them."