Karen Stintz's path to city council and the 2014 mayoral ballot has been astonishingly direct. From civil servant with no political experience to chair of the Toronto Transit Commission in just 7 years, the rise of the North York-born fiscal conservative is "the stuff of minor legend at city hall," in the words of political commentator John Lorinc.

Elected at the expense of 30-year veteran Anne Johnston, in part due to a controversial condominium project, Stintz has drawn praise from both sides of the political spectrum during her 11 year term as the representative for Ward 16--Eglinton-Lawrence.

Although her degree from Western is in political science, Stintz briefly pursued a career in journalism after completing a masters program at Boston University, later reporting for a local community newspaper. "I wanted to be [Globe and Mail columnist] Jeff Simpson," she told the paper in 2011. "Honestly, I'm not a very good journalist. I always got the lead wrong." Stintz was working with the province's Ministry of Health and Long-Term Care when she decided to run for councillor in 2003.

"I believe strongly in the role of government," she said, shortly after winning her first election, supporting the contracting out of services. "But government should only do certain things. It needs to be responsible, ensuring service happens efficiently. That doesn't mean they need to be city employees. We can find ways to partner with the private sector."

Was convinced to run for council by a newspaper advert

The Minto Condominiums on the southeast corner of Yonge and Eglinton were the match that lit the fire under Ward 16 and Karen Stintz. Although not within the ward boundaries, incumbent councillor Anne Johnston, entering her thirteenth campaign since 1972, lent support to the two-tower residential development, despite protests from local residents' groups.

One group, the Coalition for Local Change, placed an ad in the North Toronto Town Crier, a local paper, calling for candidates willing to oppose Johnston, and Stintz answered. On election day in November 2003, Stintz upset the veteran councillor, winning 42 percent of the vote to Johnston's 31. 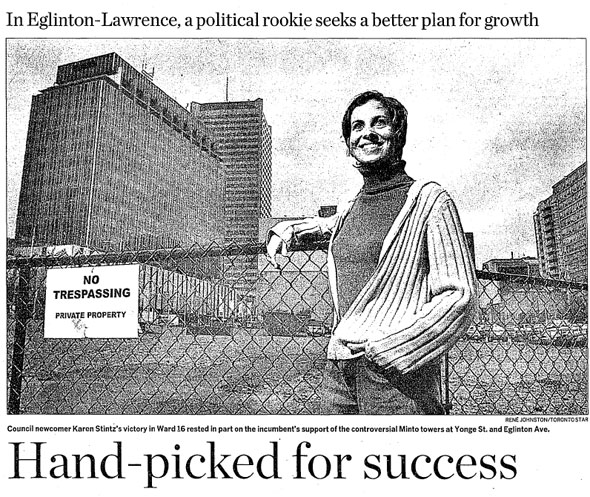 Her father was a NASA engineer who worked on the CanadArm

Karen Stintz, the only child of divorced parents, grew up with her father, Henry Stintz, an American, in North York. Henry was employed by NASA in the United States before moving to Toronto to work for SPAR Aerospace, the company responsible for the design of the arm and main control mechanisms. "I actually got to touch the arm when it was in Brampton," Stintz told The Globe and Mail in 2011, though she never saw a shuttle launch.

In 2009, the fiscally conservative Stintz was criticized for spending $4,500 (US)--about 8.5 percent of her $53,100 office budget--on speaking lessons from Lynda Spillane, a vocal coach based in Colorado. Stintz defending the spending, saying she had received complaints that she "spoke too fast and sounded 'shrill,'" according to The Star. "Knowing you speak a certain way and trying to correct it on your own is not always successful," she said. Spillane gave her "tips for speaking slower. Where to pause, how to speak, how to communicate, how to get your message out, how to lower your voice, how to be most effective."

Was chair of the TTC for the cancellation of Transit City

Following his 2010 election win, Rob Ford appointed Karen Stintz chair of the Toronto Transit Commission. Though she didn't publicly support Ford during the campaign, Stintz agreed with the new mayor's campaign pledge to build new subway lines instead of several LRTs. The project, which would have seen several light rail lines built across Toronto, was "cancelled" with Stintz at the helm, though she was left out of talks with Metrolinx and Queen's Park, at a cost to the city of about $65 million.

Appeared in an episode of Undercover Boss Canada

While TTC chair, Stintz appeared in an episode of Undercover Boss Canada, a show on the W Network that gave executives of companies such as Second Cup, Pizza Pizza, 1-800-Got-Junk? and FedEx Canada, among others, the chance to experience what it would be like to work at ground level in their own businesses. Stintz adopted the name Ruth Bear--her middle and mother's maiden name--and wore a dark wig ostensibly to see which parts of the TTC could be cut down to size, working in the upholstery shop, learning to drive a subway train, cleaning buses, and working as a janitor.

"We need to build more accountability and more ownership in the TTC, building a culture of accountability," she reported. "Everybody I worked with were longtime TTC employees that did have a lot of pride, and were frustrated by their colleagues that don't."

Next week: 5 things you didn't know about Rob Ford.